Hannah Grover spends most of her time solving complex questions of physics and engineering. This weekend, she'll face different -- but no less complicated -- questions of ethics.

Grover is a member of the Colorado School of Mines team that will compete Sunday in the national Intercollegiate Ethics Bowl. A few weeks ago, teams from around the country were given 15 ethics case studies. On Sunday, they'll argue their positions. Grover says preparing for the contest has forced her to test her assumptions and boosted her ability to hold logical, civil conversations. 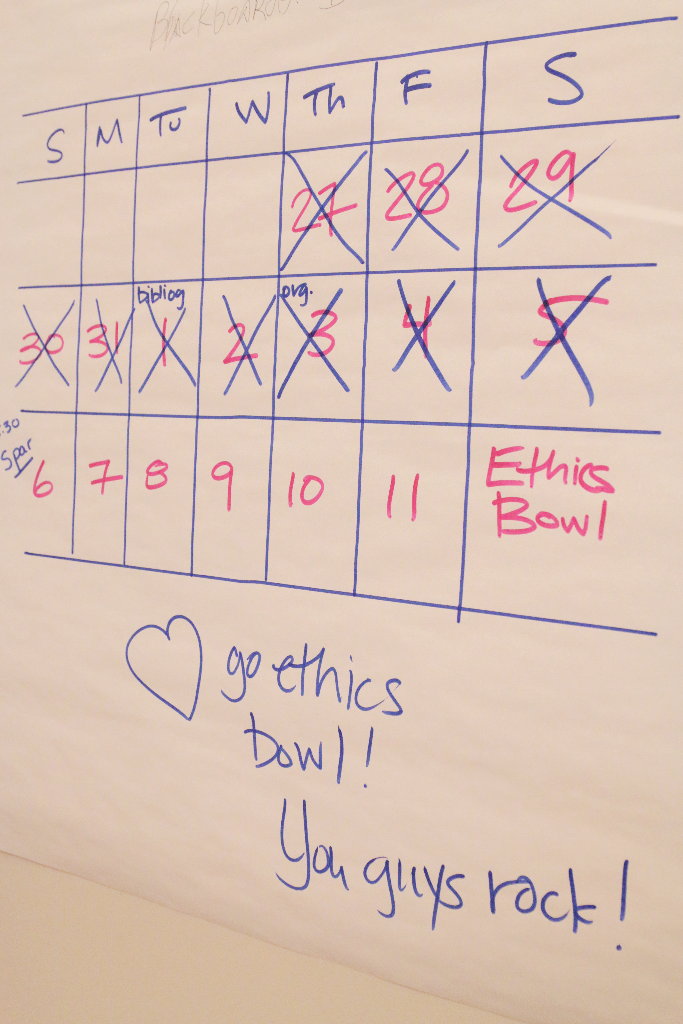 Test Your Ethics Chops: Cases from the 2017 Intercollegiate Ethics Bowl

"The New York City Commission on Human Rights released guidelines on May 6, 2016, that state, 'Any policy that singles out pregnant individuals is unlawful.' Thus, bars and restaurants cannot refuse to serve alcohol to women solely on the basis of pregnancy or perceived pregnancy ...

A number of concerns have been raised about the rights of pregnant women and the health of their fetuses. Society's interest in protecting the health of the unborn has led some to question an expectant mother's right to engage in activities potentially harmful to the fetus. People disagree about where to draw the line between the health of the fetus and the rights of the mother. Some would like to prohibit pregnant women from extreme activities such as whitewater rafting, bungee jumping and scuba diving. Others argue that expectant mothers should not even exercise vigorously or eat brie cheese.

Some object to judging or sanctioning the behavior of pregnant women because it infantilizes and devalues them. They claim that passing laws that criminalize otherwise legal behavior, only because of the condition of pregnancy, discriminates specifically against women in a way that endangers their civil and human rights. They further contend that such restrictions give equal or great consideration to the rights and interests of the fetus over those of the mother."

"Soon after Chuck and Kate married, they learned she had Hodgkin's lymphoma and that the treatment would probably limit their ability to conceive and carry a fetus to term. So, prior to starting treatments they went through the process of in vitro fertilization. Because neither of them felt they would be able to focus on raising a child right then, even one birthed by a surrogate mother, they chose to freeze the viable embryos ...

Kate survived several years of treatments, but her marriage didn't ... Only a few years later, she died in a car accident, leaving behind neither a spouse nor offspring. In her will, she directed that her parents receive complete title to all  her property. Kate had been an only child, so her parents grieved not only their loss of a daughter but also the lost prospect of grandchildren. In one meeting with the probate lawyer, they voiced this regret. The lawyer suggested they use Kate's frozen eggs as, perhaps, Kate herself would have wanted them to do: acquire some sperm through a sperm bank, hire a surrogate to gestate the fetus, and raise the child themselves ... "

No Nudes Is Good Nudes:

"After sanctions against Iran were were lifted in January, 2016, Iranian President Hassan Rouhani visited European heads of state to rebuild economic relationships. When the president visited Italy, he passed through the corridors of the Capitoline Museums, where Italy's iconic statues of Greek and Roman deities were normally displayed. On this occasion, however, they were hidden in tall white boxes. Apparently intended as a demonstration of respect for Iran's cultural and religious values, covering the statues triggered outrage and ridicule from many Italians ...

France dealt with a visit from the Iranian president differently. During planning for his visit to France, Iran requested that wine not be served when President Rouhani had lunch with President Francois Hollande. The request was denied and the lunch cancelled. In the end, Iran, Italy and France considered the visits successful. Both visits resulted in multi-billion Euro deals with Iran."