For decades, a majority of college-educated white voters have supported Republicans in U.S. presidential elections. That looks to change this year, according to NPR politics and demographics reporter Asma Khalid. She came to Colorado last week to find out why Democratic nominee Hillary Clinton appears to have a double-digit lead among college-educated white voters this year.

Khalid chose to report from Colorado because it has the highest proportion of college-educated white residents of any state in the U.S., at 43.4 percent. (Washington, D.C., has a higher proportion, but it's not a state.) She interviewed voters in Colorado Springs, Boulder and metro Denver, including Amanda and Branden Berns of Highlands Ranch, who are registered Republicans.

Khalid says the voters she interviewed do not intend to vote for the party's nominee, Donald Trump, primarily because of concerns about Trump's temperament and the tone of his campaign. She spoke with Colorado Matters host Andrea Dukakis about the Berns and other voters she met, and what issues they think are most important in this election. 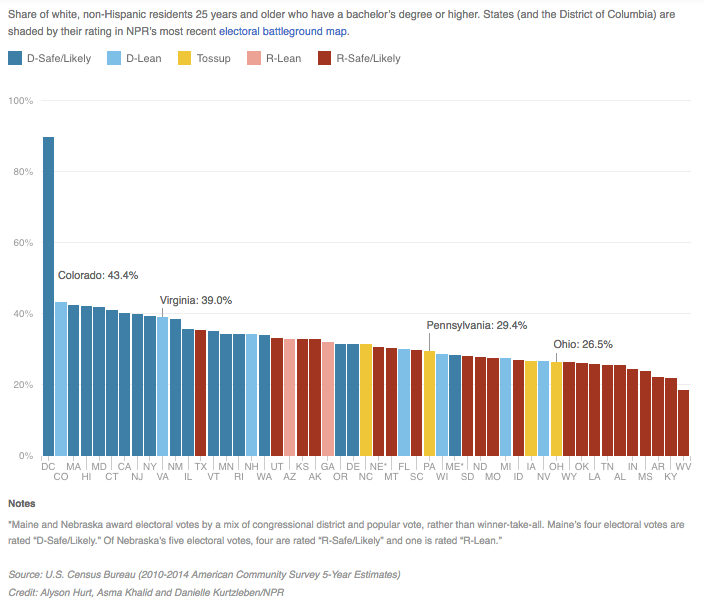 On how the Republicans she met who don't like Donald Trump will vote:

"A number of the unaffiliated and registered Republicans I talked to are not necessarily moving over to Hillary Clinton in droves. I met a number of people who told me that they really, really despise Donald Trump's tenor, the way he talks, but they also have a lot of questions about Hillary Clinton's trust, particularly around the email issue. And so they are considering [Libertarian candidate] Gary Johnson."

On why she perceives Colorado's political colors to be changing:

"This is somewhat of a hypothesis: The very people who are moving into the state are changing the demographic [of the] electorate, and changing the picture of what an average Colorado voter looks like... What is interesting to me about Colorado, if I could compare it to some of the other battleground states I have visited, is that Colorado seems to have gone from a very, very purple state, to a lean, even likely blue state, very rapidly."

"One of their hesitations this year with Donald Trump is the way that he talks, the rhetoric that he brings about. But Branden also mentioned to me, one of the big takeways for him, he is a lawyer, went to Columbia Law School, is he really does value education. And he said one of the takeaways for him is not only the way that Donald Trump talks, but some of the stories, whether they be rumors or not, about whether or not Donald Trump has the attention span to read a long-form book... It was very interesting to me that these were character traits that they noticed."

On Colorado leaning Democratic in the presidential race, but recently electing Republicans to Congress and the Senate:

"The large number of unaffiliated voters [interests me]. And I met one gentleman in Colorado Springs who very proudly told me that he voted for the Democratic governor, and then he went on to vote for the Republican mayor of Colorado Springs. And that he likes this idea because he says that he looks at every election and it's a sale: He feels like the candidates need to sell themselves to him, and whoever makes the better pitch is who he'll vote for."