Before you ask: No, John Denver is not the city's namesake.

Denver does owe its name from another man with the initials J.D., though. James William Denver was a Civil War general, a territorial governor and the eponym for the Mile High City. 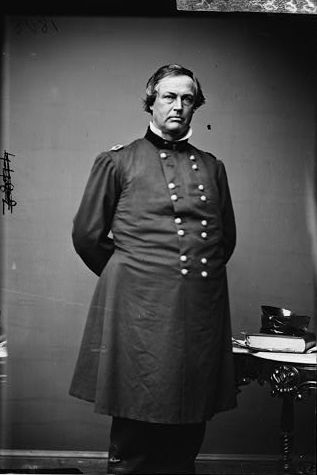 Courtesy of the Library of Congress

While he was the territorial governor of the Kansas Territory, Denver played a role in appointing several county officials and a sheriff in what would become the county seat Colorado’s Eastern Plains.

Two of those appointees also have familiar names to Denverites — Ned Wynkoop and William H. Larimer.

Those officials kicked around name ideas like Eldorado, Jefferson, Mineral and Mountain City, but eventually settled on Denver City in 1858 to honor the man who selected them. (The "City" was dropped about a decade later.)

Denver the man went on to run in (and lose) the race to be California's governor and fight in the Civil War. He was also part of in a high-profile duel, which he tried to end peacefully, but in the end was the only one who walked away alive.

Journalist Matt Masich talked to Colorado Matters more about the eventful life of James William Denver and the history of the city that bears his name.