At least when Regina George turned around and called a girl's skirt "the ugliest effing" thing she'd ever seen behind their back, her peers didn't have to fear her on Instagram and Facebook too.

A lot has changed in the 15 years since "Mean Girls" first premiered in theaters, and since Rosalind Wiseman started writing about the inner lives of tweens and teens. Her book "Queen Bees and Wannabes: Helping Your Daughter Survive Cliques, Gossip, Boyfriends, and the New Realities of Girl World" inspired the hit movie.

Today, Wiseman runs Cultures of Dignity, a company out of Boulder that focuses on youth mental health. Next month she speaks at a youth safety symposium in Montrose, one of the centers of the Western Slope's youth suicide epidemic.

Wiseman talked to Colorado Matters about teen mental health in the digital era, how parents should talk to their kids and the problem with calling for more "resiliency."

On what's changed and what hasn't for teens today:

"What's timeless is young people's need for really close friendships, and to feel like they belong in a group. I think it's important for adults to know and appreciate that the world is really different for young people now. For example, young people have no privacy to go through and make the mistakes that we all did without it becoming incredibly public and for people to be able to comment on it. 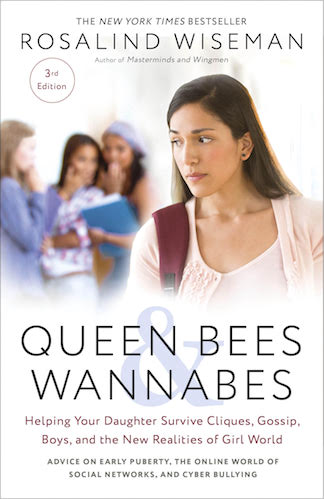 I've spent my entire career of fighting against these things. But the way to handle it with boys is not to shame them, or to not allow them to ask questions. We hold them accountable in the right way. It is so much social currency for boys to be funny with their friends. Sometimes they forget that what they're doing is really wrong, or will look really terrible to other people and that has been happening for forever. And now unfortunately we have records, videos, recordings, their texts."

On how parents should respond when their kids open up to them about bullying or mental health:

"Young people can tolerate incredibly horrible situations. Things that they never, ever should deal with. By the time a young person comes to talk to an adult about a problem, like bullying, they've been thinking about telling that adult for a very long time. So when an adult says, 'Don't let it bother you, don't let them see that it bothers you.' Those kinds of things, it's a real shutdown and it feels like isolation. We know that feelings of isolation really compound the tendency towards suicide.

Yes, bullying happens, but it is not the way that the media usually portrays it. Did this child commit suicide because they were bullied? Human beings are more complex than that. And so the reasons that people would kill themselves, would take their own lives, are more complex than that. So one of the things I say to adults all the time is if you are in those situations, don't blow it off. The thing you need to be saying is, 'Thank you so much for telling me, and together we're going to work on this. But I am so sorry that you have gone through this experience."

On the problem with calling for more "resiliency" from young people today:

"We don't know what it's like to walk in young people's shoes. We don't often ask them. We give them advice that is not reflective of their experiences.

We don't know what this is like, and yet we would say that our kids lack resilience and grit? I mean it's just an incredible thing to me. I want us to take a moment to think about one of the most common things that we say to young people, which is if you have a problem, if you're being bullied, go talk to an adult. Well, which adult? That's a skill. You don't just randomly go up to an adult, especially if you're going to a school with 2,000 people in it and you're in a class with 30 kids. Just think about the context in which our young people ask for help."

We Want To Hear From You

On Thursday, June 4, Colorado Matters will be a statewide listening session about this tumultuous time. Whether you’re on the front lines or watching from home, we want to hear what you’re going through. Please leave us a voicemail at 303-871-9191 ext. 480.

Colorado has the nation’s 5th highest rate for fatal law enforcement shootings. CPR News created and analyzed a database of information from every shooting in which a suspect was injured or killed in the past six years.