There are five or six rooms along the dark hallway of a small Alamosa clinic. Every few minutes, Dr. Barbara Troy creates something of a blur there as she darts from door to door.

Troy is far from the only busy doctor in Colorado. But here, at the center of the San Luis Valley in the southern part of the state, her hustle is a little different. In an area ravaged by the opioid crisis, Troy is the only doctor for miles who can prescribe a key drug for those in recovery.

“I love the work,” said Troy, who came to the area in 2014. She wasn’t planning on addiction work, she said, but the decision to do that ended up not being hers. “I’m a community doctor. I’ll do whatever they need.”

Each of the six counties in the valley has an overdose death rate of 20 or more per 100,000 people, according to 2014 data from the Centers for Disease Control, and opioids are the main drugs associated with overdose deaths.

Overdose deaths in Colorado in general have grown in the last decade, according to the Colorado Health Institute. In 2014, San Luis Valley-area healthcare providers began limiting how opioid drugs are prescribed. But, as High Country News reported, the resulting decline in how often painkillers were prescribed was followed by a surge in heroin use.

There’s a dearth of treatment options in the valley. Alamosa has one methadone clinic, which Troy helped set up. Since that drug requires regular visits to the clinic, many people in recovery prefer buprenorphine, which can be taken at home.

Troy, a family practice physician and obstetrician at Valley-Wide Health Systems in Alamosa, says she’s the only doctor in the area who can prescribe it, “for at least 50, 80 miles, maybe 100.”

Patients know where to find her though. And many of them are new or expecting moms. 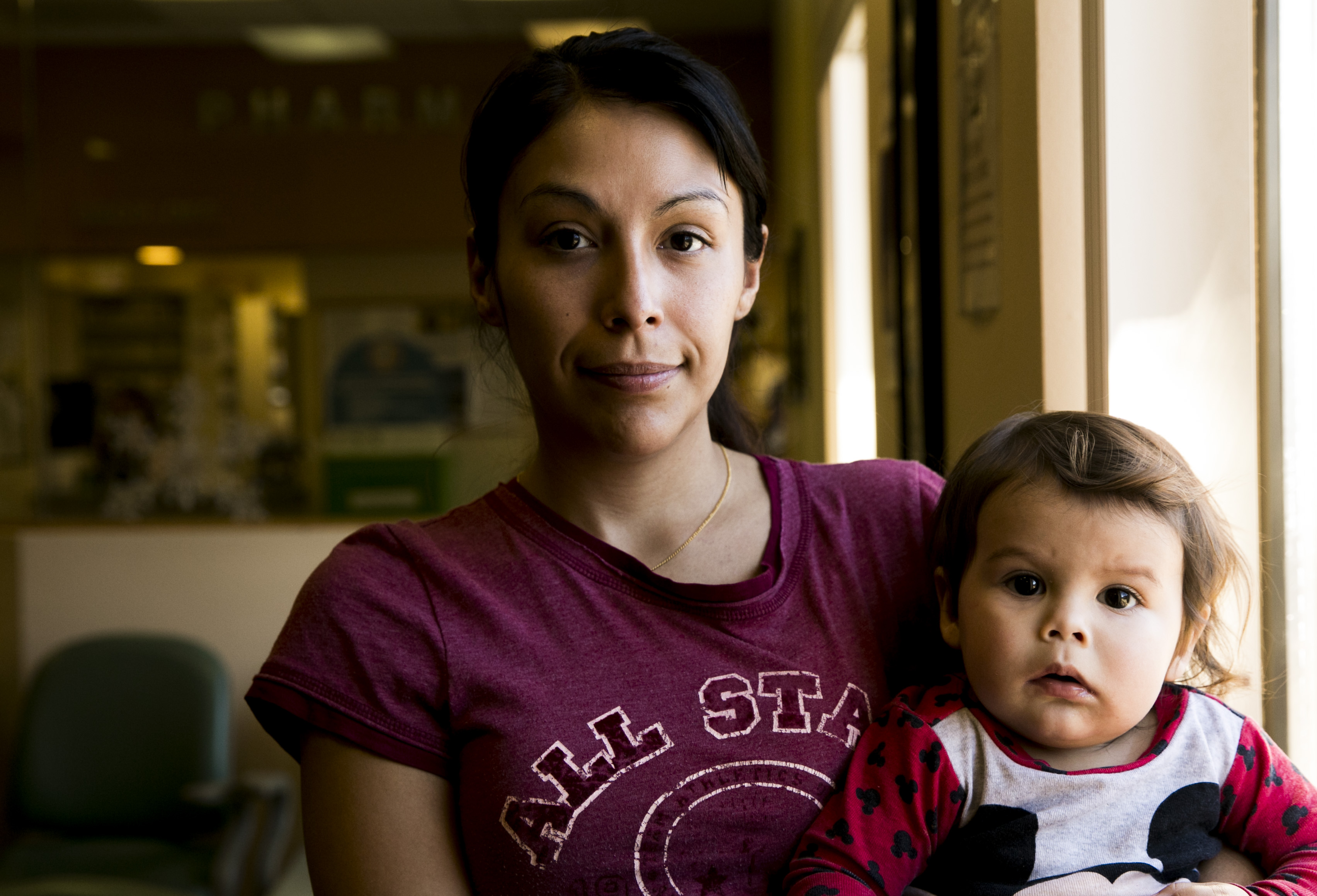 Roslyn Garcia, a 32-year-old mother of four from Alamosa, is one of them. She became addicted to prescription painkillers after she says her jaw was broken in a case of domestic violence. After the prescriptions ran out, she turned to heroin because it was cheaper — for a time.

“It's not cheap after you get addicted to it,” Roslyn said. “Your body needs it in order to function.”

At the height of her addiction, she was spending $150 a day just to avoid withdrawals. Those, Roslyn said, are like the flu “100 times over.”

“I wanted to bite my nails. It would make my legs feel like somebody was stabbing them. I wanted to tear out my hair,” she said.

While she was pregnant with her now 10-month-old son Dion Angelo, Roslyn got a buprenorphine prescription from Troy, a medication that helped her get off of street heroin. Her baby was born with buprenorphine in his system and went through his own withdrawals in the nursery.

As grim as that might sound, matters could be worse. Troy said newborns whose mothers were on buprenorphine stay in the hospital a few days longer, and can be more irritable than other infants. But those symptoms are less severe than if Roslyn was on heroin.

Dion is doing much better now, Roslyn said, but she is still working on her own addiction. She tried to wean herself off buprenorphine about six months ago using whiskey. It didn’t work.

“I managed to get through it for three days,” Roslyn said. “The fourth day came. Five o’clock in the morning came, and I had been up all night. My leg pains were just so bad I couldn't take it anymore. So I told my dad, ‘I can’t do this. I’ve tried and it’s just too hard.’ ”

Roslyn thinks she’ll be on buprenorphine for the foreseeable future. But at the end of a recent visit to Troy’s office, Roslyn learned she’d tested positive for an opioid other than buprenorphine. She denied having taken anything illicit, but Troy later confirmed the test’s result: Roslyn had relapsed.

“It’s a chronic disease,” Troy said of the addiction. “Over the course of time you're expecting to have part of this happen, because it does. It just does. … I treat it just like any other chronic disease that I would see.”

While Troy expects relapses, she keeps a sharp eye out for parents who’ve fallen off the wagon completely and can’t care for their children. That’s not the case with Roslyn, Troy said. She sees Roslyn as a woman who, despite every setback, is trying her best.

A native of Colorado’s Eastern Plains, Troy says she went to medical school “on a mission” to be a family medicine doctor in rural areas. She practiced in northern New Mexico until she moved to Alamosa in 2014 to be closer to her mother in Eads, north of Lamar.

Because no doctors in the area had a license to prescribe buprenorphine, Troy said she assumed there wasn’t a need for it.

“I didn't know the community at that point in time. And within a week or two, I was like, ‘Oh, they need a Suboxone program,’” Troy said, referring to a brand-name drug that contains buprenorphine and nalaxone, an anti-overdose drug.

Now, Troy said she has 30 patients on buprenorphine — that’s about all she can handle. She will often refer patients she can’t help to a nearby methadone clinic. But that only serves 20 residents, the Alamosa Valley Courier reports. The need for more treatment options is urgent, Troy said. She estimates the area needs at least five more providers.

Help will soon be on the way. Dr. Jack Westfall of the University of Colorado Anschutz Medical Campus and director of the High Plains Research Network is leading a team that received a $3 million federal grant last summer. Westfall’s team will encourage more doctors and nurses in the San Luis Valley and Eastern Plains to get the training and certification needed to prescribe buprenorphine, among other goals.

Many doctors don’t like to treat opioid-addicted patients because of outdated perceptions, Westfall said.

“The way I was trained about addiction was that heroin addicts were homeless people living in downtown Denver,” he said. That demographic can require more services and strain clinic staff.

“So now practicing docs are like, ‘I don't want that group of people in my waiting room,’ not recognizing this change in the demographic of who's addicted to opioids is now,” Westfall added. “It could be anybody. It's teachers and bankers and farmers.”

Westfall hopes to have more providers trained by this spring. Until that happens, Troy said she’ll keep doing what she can.

For Esperanza Garcia, bottom hit when she woke up in a car in Pueblo. She was 18 and had been using heroin for four years.

“I said I didn't want to do this anymore,” she said.

Esperanza, who’s not related to Roslyn Garcia, went to her mother’s house in Center, about 30 miles northwest of Alamosa. She quit using on a Saturday, but she couldn’t get treatment until the following Monday.

Then withdrawal set in.

“She vomited. She was shaking. She was cold. She was hot,” Esperanza’s mother Alicia Garcia said. “I just sat with her. I think we didn't sleep for two nights straight. It was probably the worst weekend of my life.”

Esperanza got into Troy’s buprenorphine program. The Suboxone she’s on has helped with the cravings and allowed her to get back on her feet.

Toward the end of their visit, Troy asks Esperanza about her life after heroin. Esperanza is working on her GED, and eventually, she wants to be a nurse that works with young adults who struggle with addiction.

“Keep up the good work,” Troy responds with a smile.

Dr. Troy lingers for a few more minutes of pleasantries. Then she’s off to her next appointment.