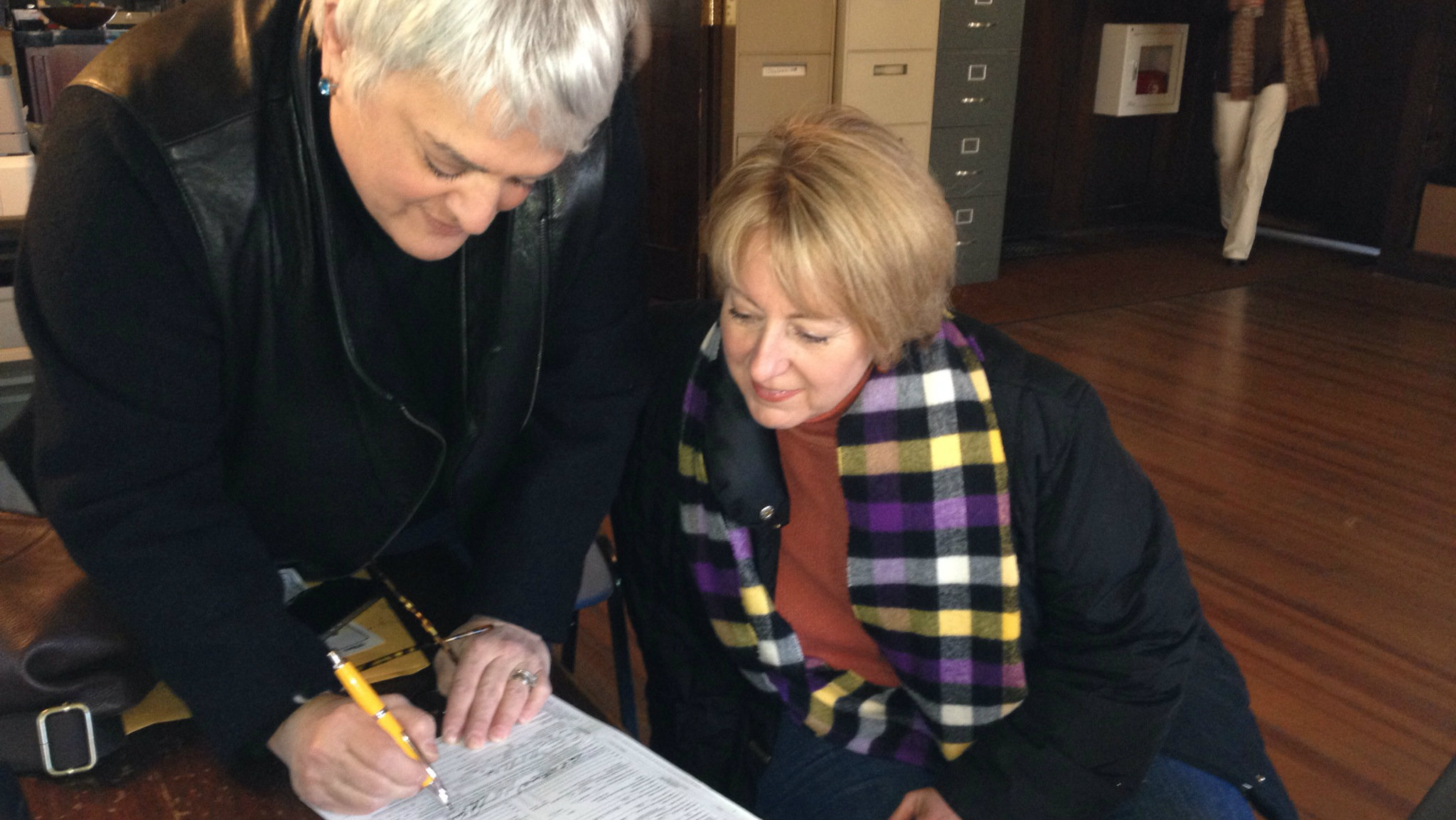 (Photo: Courtesy of Kris McDaniel-Miccio)Nine same-sex couples are suing to overturn Colorado’s ban on gay marriage. Two of them, Kris and Nan McDaniel-Miccio, spoke publicly and at length about their decision for the first time on CPR's Colorado Matters on Tuesday.

The McDaniel-Miccios, who live in Denver, were legally married in New York in late 2013. Shortly afterwards, they decided to challenge their home state’s ban. Kris McDaniel-Miccio says she does not support the civil unions law in Colorado, because she thinks it creates two classes of partnerships, with gay couples considered second-class.

In challenging the state's gay marriage ban, the nine couples say they are being harmed by the law in place here. Kris McDaniel-Miccio says that harm takes legal forms -- such as keeping her out of hospital rooms where Nan might be treated in states that don't recognize their union -- but it also takes symbolic forms.

"We're considered less than," Kris McDaniel-Miccio said. "It's written into our laws. This is legal discrimination and legal segregation," she added.

The women said public opinion has shifted significantly since Coloradans passed the gay marriage ban in 2006 via a constitutional amendment. "The public feeling and opinion is changing because more and more people have come out and are saying to their friends and relatives, 'I'm gay,' 'I'm lesbian,' 'I may be transgendered,'" Kris McDaniel-Miccio said.

In April, the Court of Appeals for the 10th Judicial Circuit, which is in Denver, will hear arguments in two cases that could change the landscape for same-sex couples in Colorado. Cases from both Utah and Oklahoma will be heard, marking the first time a federal appeals court will take on a challenge to a state gay marriage ban. Legal observers say it's possible that the federal court will rule in the plaintiffs' favor in one or both of those cases, and it's likely that one of those cases, or another case anticipated to go before a federal appeals court in the coming months, will end up in the U.S. Supreme Court. Any or all of those cases could influence what happens in Colorado. That may raise questions about why the Colorado plaintiffs have filed suit in the state, given the existence of these federal cases on an accelerated timeline.

The McDaniel-Miccios said they filed the suit in part because they want Colorado's own state court to consider the legality of the ban that was passed here. "We thought it was really important to bring the question back to Colorado, because it came from Colorado. And to me, that's an act of respect, that the Colorado courts will determine whether or not what happened in their jurisdiction follows and is within the ambit of our state constitution and our federal constitution," Kris McDaniel-Miccio said. The couple specified that they spoke only for themselves, not the other eight couples in the lawsuit.

Kris McDaniel-Miccio said the case has been assigned to a judge and she expects forward movement on it in the next month, but she does not have a timeline for the case to play out. "I'm not the most patient person in the world, but realizing that I put myself and my wife into a system that is all about the courts, one has to be patient."