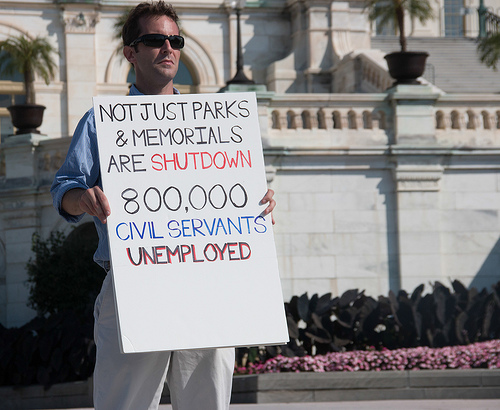 (Photo: Flickr/VPickering)For an 11th day, much of the federal government remains shuttered and many of its employees furloughed, temporarily laid off without pay, although it's possible they'll get backpay once the furlough ends. Since Day One, you've been telling us through our Public Insight Network how the partial government shutdown is affecting you.

We called some people who wrote to us to see how they're faring. One of them is Carolyn Sutton, a Denver mom whose 13-year-old son Andrew is in the nation's capital now on a school trip planned months ago. The trek to Washington promised to give middle schoolers some early exposure to the inner workings of government.

Needless to say, that all changed and so did the iternary for the student trip, which cost more than $2,000. Ryan Warner hears from Sutton about how her son is enjoying his modified trip to the nation's capital.

Are you also being directly affected by the shutdown? Click here to also add your voice to the mix as we follow this story closely.