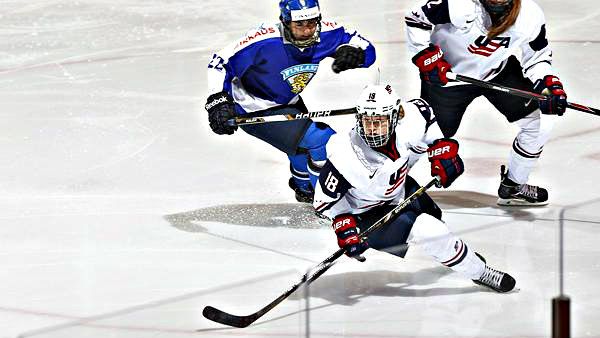 (Photo: Courtesy of Lyndsey Fry)When Lyndsey Fry takes the ice in Sochi, Russia, next month to compete in the 2014 Winter Olympics, she'll carry more than a hockey stick.

Fry will also have with her the memory of Liz Turgeon, a friend who was supposed to be there, as well as the encouragement of both their families and past coaches and teammates.

Fry played elite high school hockey in Colorado on a team called Colorado Select. Fry says it was the only option growing up in Arizona to play with other girls and try to get recruited by the top college programs. That meant Fry had to spend two weeks of every month in Colorado and take classes online.

When she was here, Fry usually stayed with her teammates' families. More often than not, she stayed with the Turgeons.

After their last game as high school students, Fry and Turgeon promised each other they'd one day play in the Olympics together.

"We were all 17 years old and crying," Fry tells Colorado Matters host Ryan Warner. "It was hard for the two of us because we knew we were going in different directions: I was committed to Harvard and she was committed to Minnesota."

Fry is a student athlete at Harvard but is taking this year off to compete in the Olympics.

"I just put my hand on her knee and said ‘this isn't going to be the last time we play together’,” Fry says.  “We are going to work our butts off and do everything we can to make that Olympic team.”

But three years ago, when the two were freshmen in college, Turgeon was killed in a car accident.

"She's not here now for [our Olympic dream] to fully come true," Fry says. “But that's the promise I made and I'm pretty committed to keeping it. And I think no matter what, she'll be there with me.”

Fry carries her friend’s old jersey with her as she prepares for Sochi but says she's accepted what happened and that Turgeon "wouldn't want me to be sad."

As Fry and the rest of the U.S. women's team prepare for the Olympics, they're playing against elite boys' high school teams in New England as well as teams of retired National Hockey League players and the Canadian women's Olympic team, which is the U.S.'s main rival in international competition.

Thinking ahead to Sochi, Fry says she's most excited about playing with her family watching in person.

“Everyone watching at home, the Turgeons and everyone that's ever had an impact on me, I think knowing they're supporting me -- that gets me really excited," Fry says.

Fry's story is part of Colorado Public Radio's series "Colorado Competes" which profiles athletes ahead of the 2014 Olympics.

Read more of Lyndsey Fry's story and see a photo of her with Liz Turgeon's family and hockey jersey at ESPN W.