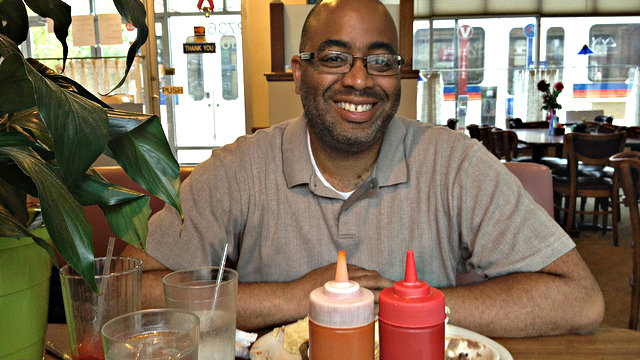 (Photo: CPR/Ryan Warner)The roots of soul food -- including catfish, fried chicken, black-eyed peas and pig intestines, better known as chitlins -- go way, way back, according to Denver author Adrian Miller, who has written a history of the cuisine.

"I define soul food as one of the traditional foods for African Americans," Miller tells Colorado Matters host Ryan Warner as the two ate at Welton Street Cafe in the historically black Five-Points neighborhood in Denver. Soul food is distinct from southern and creole cuisines, Miller says, because when African Americans left the south and headed north, soul food went with them, and has now become a national cuisine for African Americans. But it changes slightly depending on where it's prepared.

But the history of soul food can be a painful history, with connections to slavery, Miller says. Catfish, in particular, has a checkered history because slave labor was used a lot in the fishing industry. In the 20th Century, whites used fried chicken and watermelon to "stigmatize black people," Miller says, and "food stereotypes gained currency" as a way to discredit African Americans in the south.

But today there are more than 20 soul food restaurants in metro Denver, Miller says, serving a variety of customers. And Miller provided these recipes for you to try soul food cooking at home.

Fish curries were a popular Big House dish in the antebellum South. Both Martha Washington and Mrs. Randolph had recipes for this dish in their signature cookbooks. At some point, black cooks brought the dish into their kitchens. In 1939, Crosby Gaige’s New York World’s Fair Cookbook (from which this recipe is adapted) described catfish curry as “a favorite among the Negroes.”

1 Rinse the fillets under cold running water and cut them into 2- inch pieces. Place them in a medium saucepan and add the water, onions, salt, and pepper. Bring to a boil, reduce the heat, and simmer until the fish is tender, but not breaking apart, about 8 minutes. With a slotted spoon, transfer the fish to a serving platter and cover with foil to keep it warm. Boil the cooking liquid until it reduces to 1 cup, then keep it warm over low heat.

2 Combine the flour, curry, and butter in a small bowl. Mix with a fork or fingertips to form a smooth paste. Roll teaspoon- size bits of the paste into balls.

3 Return the cooking liquid to a simmer. While stirring slowly and continuously, drop the balls into the liquid one at a time, letting each one dissolve before adding the next. Cook until the sauce returns just to a boil and thickens to the consistency of gravy, about 5 minutes. Check the seasoning.

4 Pour the gravy over the fish and boiled rice, sprinkle some parsley on top, and serve hot.

This is my favorite thing to make in the soul food genre. I didn’t grow up eating collards. My mother usually made a combination of mustard and turnip greens. Turnip greens seemed to be the popular option for greens as I traveled through Tennessee. I love the peppery aroma that mustard greens give off while they’re cooking. I’ve lately been using smoked turkey parts to season my greens because they give good flavor with less fat. Yet, every once in a while, I go retro and put on a pot of greens with some ham hocks.

2 Meanwhile, remove and discard the tough stems from the greens. Cut or tear the leaves into large, bite-sized pieces. Fill a clean sink or very large bowl with cold water. Add the leaves and gently swish them in the water to remove any dirt or grit. Lift the leaves out of the water and add them to the hot stock, stirring gently until they wilt and are submerged.

4 Simmer until the greens are tender, about 30 minutes. Check the seasoning and serve hot.

From SOUL FOOD: THE SURPRISING STORY OF AN AMERICAN CUISINE, ONE PLATE AT A TIME by Adrian Miller. Copyright © 2013 by Adrian Miller.  Used by permission of the University of North Carolina Press. www.uncpress.unc.edu