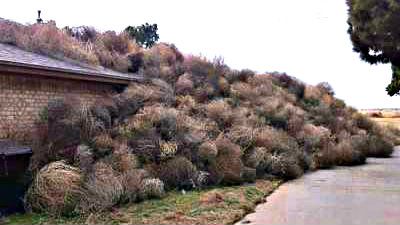 (Photo: Courtesy of Ben Berlinger)The population of tumbleweeds has exploded in Southeastern Colorado with giant piles of the weed knocking down fences, blocking highways and even trapping people in their homes. El Paso County is even sending out snow plows to clear tumbleweed drifts from roads.

After two years of severe drought, native grasses in the region have withered, leaving the bare ground exposed. Meanwhile, the tumbleweeds have been diligently spreading their seeds as they bounced across the plains.

The rain that brought flooding to areas like Estes Park and Longmont, Colo., last summer brought enough moisture to Southeastern Colorado to germinate those seeds and tumbleweeds sprouted in abundance.

After drying out over the winter, the tumbleweeds are breaking free with the strong winds and are now blowing in massive numbers across the plains.

"It's as bad as I've ever seen it," Rangeland Resource Specialist with the Department of Agriculture’s Natural Resources Conservation Service Ben Berlinger says. “I’ve seen piles up to the eaves of a house.”

Berlinger recently visited a ranch in Lincoln County that replaced five miles of fencing that had been crushed by mounds of tumbleweeds.

Long considered a romantic symbol of the American frontier, the tumbleweed is in fact an invasive species with the less romantic name of Russian Thistle. The species originated on the Eurasian continent and was brought to America by immigrants centuries ago.

Russian Thistle is heat-resistant and requires little water which makes the plant well-suited to its adopted home in the American southwest, Berlinger says.

In addition to drought, overgrazing of cattle on native grasses can contribute to the explosion of tumbleweeds. The grazing can also be part of the solution as the young Russian thistle plants are nutritious and tender enough for cattle to eat.

Now Coloradans are starting to see the intersection of tumbleweeds and wildfire as fire season begins.

Shifting winds caused a controlled burn to encompass tumbleweeds recently at Rocky Mountain Arsenal near the Denver International Airport, creating what looked like a fiery tornado, according to Slate.com.

Berlinger says the long-term solution to the tumbleweed invasion is to improve perennial grass cover to choke out them out.