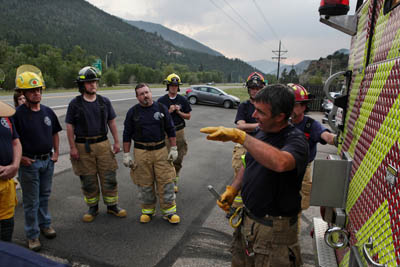 Lawyer by day, first responder by night
Colorado lives depend on volunteers with varied training

When you dial 911 in Colorado, the first responders who arrive to help usually show up in a fire truck. And, on interstates and highways connecting vast swaths of rural Colorado, they are likely to be volunteers – people whose day jobs range from lawyers to butchers to high school students.

Fully three-fourths of America’s first responders are saving lives for free, extricating a driver trapped in her car, or extinguishing a truck explosion. Colorado law does not require them to be medically trained to handle those calls, says Micki Trost of the Colorado Division of Fire Prevention and Control.

In much of the state, the first person on the scene of a life-threatening crash could be a volunteer nurse, or it could be someone whose training stops at cardiopulmonary resuscitation (CPR). Just how much money is available for those volunteers’ training and equipment depends on the tax receipts of often cash-strapped rural fire districts.

“There isn’t a state mandate on the training because it’s a local decision on what requirements are going to be for that agency for those responders,” Trost said.

Clear Creek Fire Chief Kelly Babeon says some day the state may adopt laws that provide blanket requirements for medical training. But he worries that more rules means it will be harder to find volunteers willing to commit, especially in rural areas.

“Regulations on our requirements keep progressing and changing,” Babeon said. “But I think it would make it difficult for some departments to have people available. We do the best with what we have.”

Clear Creek’s volunteers cover crashes on more than 30 miles of Interstate-70 in the mountains from the Eisenhower tunnel to the top of Floyd Hill, as well as three dangerous passes: Guanella, Loveland and Berthoud.

The department handles about 1,300 calls every year, of which 36 percent occur on the highway. Babeon is one of only two paid people on a 45-person force that responds to those calls. The rest of the force consists of volunteers.

“I’m interested in saving lives and just being out there helping people,” said volunteer Erin Vaughn, a junior at Clear Creek High School. “I think it’s what I’m meant to do.”

Volunteers in Clear Creek are trained at varying degrees to keep injured people alive until an ambulance arrives from the nearest town. The department requires they have a minimum 72 hours of fire and rescue training a year. Newer volunteers are required to attend 12 sessions in their first six months.

Clear Creek is lucky to have three flight-for-life nurses among its volunteers. They include Cpt. Peter Werlin, who says 80 percent of Clear Creek’s crisis calls are for medical assistance. Often, the first person on the scene is one of his crew.

“If something happens in ... any of our smaller towns, it is our volunteer that has that best chance to save that life,” Werlin said. That life often depends on the volunteer’s knowledge of basic CPR, and training on how to use a heart-starting defibrillator device.

“A fancy helicopter, a paramedic ambulance, does nothing if you don’t have a volunteer or citizen rescuer starting things as early as possible,” he said.

In rural, sparsely populated districts, it’s often hard to find qualified medical personnel to give their time, and when you do, that person isn’t always available. John Decker, of the volunteer Wet Mountain Fire Protection District in Westcliffe, notes that his 35 volunteers include a real estate agent, a carpenter and the town butcher.

“When [an emergency call] comes in, he tosses his apron, and he’s off to a call,” said Decker.
Volunteer firefighters in Westcliffe, population 568, in Colorado’s southern mountains, must at least know CPR and how to run a defibrillator.

“We’re so remote, you’re lucky to get what you’ve got,” said Decker, who, as president of the Colorado Firefighter’s Association, knows his is not the only rural fire district operating on a shoestring budget.

“Some departments, you know, they barely can afford gasoline, workman’s comp, or insurance on their vehicles,” Decker said.

Some states provide funding to help pay for operations support for emergency responders like volunteer firefighters. California, for example, enacted a law in 1986 that collects $1 per vehicle registration for this.

Colorado has no similar laws, but it’s not for lack of trying. Babeon says he has appealed to legislators here with the idea to enact a per-vehicle registration fee, without success. Instead, Babeon says his district’s operations budget comes from grants, private donations and pancake breakfasts.

In addition to all the vehicle crashes, the state’s volunteer firefighters somehow also respond to their first responsibility – fires. This summer’s extreme fire danger has added to the stress on many rural districts. Wet Mountain Fire Protection District’s Decker says the drought has taken its toll on his team.

“We’re on pins and needles ‘til we get our first good snow or rain,” he said.