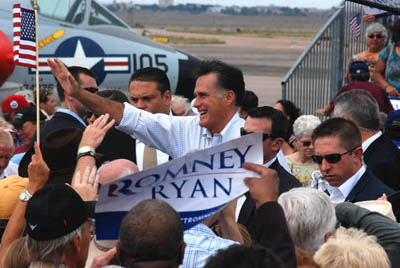 At a rescheduled campaign stop in Pueblo Monday, Republican presidential candidate Mitt Romney criticized president Obama's handling of the economy and the situation in the Middle East. KRCC's Shanna Lewis reports about 2000 people turned out for the event at the Pueblo airport.

Romney told supporters energy independence is key to his economic plan - and he promised that could happen in eight years' time.

Romney’s plans for opening up energy development were good news to Puebloan Paula Belden, who says she’s a registered Democrat.

I’m extremely excited about using the resources we have in Colorado. If we can become energy independent, that is so important. I don’t want one more American life lost because of oil and we all know that’s what it’s about.

Belden says Romney has her vote, even though she wishes he supported a widely-debated tax credit for wind energy as well. Uncertainty over that credit is the reason given by wind tower maker Vestas for laying off workers in Colorado.

Romney also told the Pueblo crowd he’d eliminate taxes on capital gains and dividends for people making under $200,000 a year.

The Obama Campaign meanwhile calls the extension of the wind production tax credit critical, and says it supports around 5,000 jobs in Colorado.