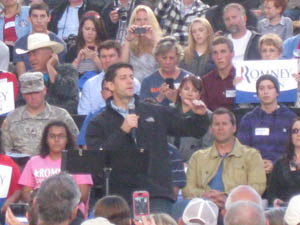 "He kind of filled in a few details, maybe not everything we were looking for, because we got a lot of whirl, but we are not going to be able to deal from a position of strength without being strong."

Journalistic fact-checker Politifact.com says blaming Mr. Obama for the cuts is half true. The possible defense cuts, and other cuts, known as sequestration, are set to go into effect next year. That’s if lawmakers can’t agree on how to reduce the deficit.