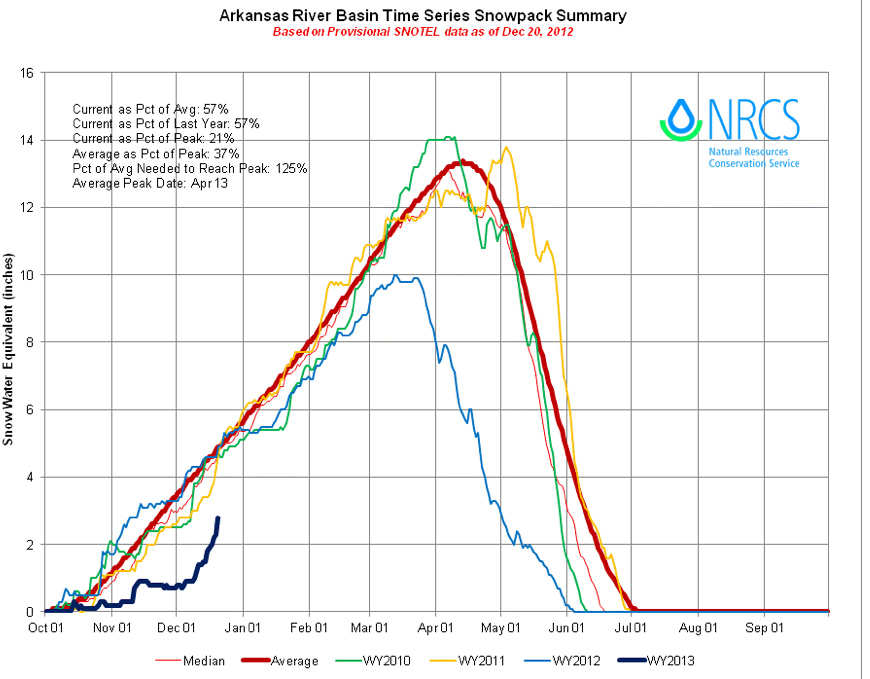 For many in Southern Colorado, the Arkansas River is the lifeblood of healthy communities. But the region suffered through this year’s extreme and exceptional drought conditions. And as KRCC's Andrea Chalfin reports, all along the Arkansas River, people are in some ways, holding their breaths to see what this winter brings.

Rob White, park manager at the Arkansas Headwaters Recreation Area in Salida, says a good snow year is critical for the river, and those who depend on water. While the current flow of the river is about average, during the summer, White says portions of the popular rafting destination were barely boatable.

Typically the snow to water equivalency in the Arkansas River basin approaches around 5 inches by mid-December. Right now it’s only 57% of average. With so much riding on this year’s snow pack – the numbers are disturbing for farmers downstream who depend on the river for irrigation.

2012 got off to a promising start along the Arkansas River – but things gradually got worse. A lack of rainfall didn’t help the alfalfa and corn crops that are predominant here—one gauge in Rocky Ford shows less than 5 inches of total precipitation.

78-year old John Schweizer and his family farm hay near Rocky Ford. Schweizer says if you can’t get the snow, you can’t depend on rain, either.

“It might [rain]. And it could. But you don’t know that. And if we go through the winter like it is now, I doubt if there will be much activity at all.”

But it’s not all doom and gloom. Farmers like Schweizer are by nature, optimistic.

“We got all winter yet,” Schweizer says. “This is early. So, we’re not panicking yet because it can change overnight. We’ve seen it do it many times, and so we just have to go along with it and have faith enough to think that it’s gonna get better.”

And in the Upper Arkansas River Valley in Salida, park manager Rob White has a similar outlook.

“A lot can happen between now and May 15th when we start to experience runoff. I think what’s really important is that we get those snowstorms that we typically get in the spring months.“

Despite the optimism, a recent seasonal outlook from the Climate Prediction Center at the National Weather Service says drought conditions are likely to persist or even intensify through next March.