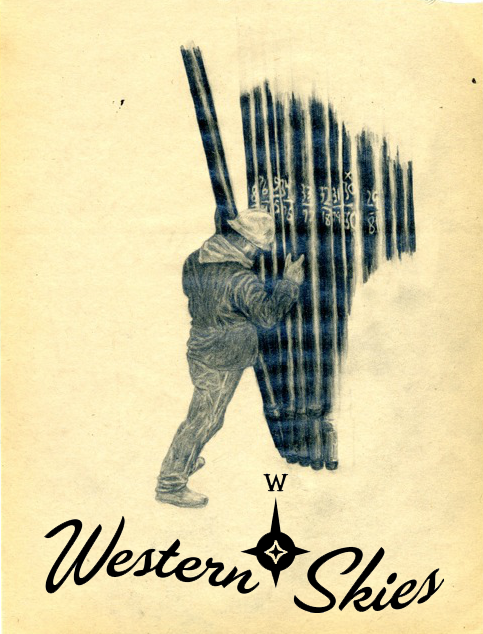 One of the biggest topics right now across the state is oil and gas development, specifically, hydraulic fracturing. Communities, industry, and the state are all working to ensure their interests are protected. But it’s a complicated issue, and often contentious. This month for Western Skies, we're holding a magnifying glass up to fracking, the rules, regulations, and community concerns. (This month's image by artist and rig-worker, Streeter Wright.)

You can listen to the entire episode here, or download it by right-clicking this link:

You can also head to the individual segments and check out the pieces, conversations, and more by clicking any of the following links:

Capitol Reporter Bente Birkeland sat down with Matt Lepore, who heads the Colorado Oil and Gas Conservation Commission; Pete Maysmith, head of Conservation Colorado, and Kathleen Sgamma, with Western Energy Alliance to talk about the push and pull of hydraulic fracturing from a state perspective.

Listen to or download the edited conversation, which begins with Kathleen providing a definition of fracking (about 21 minutes):

You can also listen to or download the full conversation here (about 43 minutes):

Special thanks to Rocky Mountain PBS for lending us space to record this month's roundtable.

During Colorado’s early days, land ownership was all encompassing. But in the early 20th Century, the federal government began reserving the rights to use some of the land’s rich minerals. By 1916, Congress began withholding all mineral rights from new homesteads. As a result, the federal government currently owns over half the mineral rights across the state. The rest is owned by individuals and other entities. KRCC’s Katherine-Claire O’Connor takes a look at the process of aligning stakeholders when it comes to drilling.

You can hear the story of another man's experience with oil & gas drilling on his land, by visiting Rocky Mountain Community Radio sister station KDNK. Rick Roles: A Gas Lease Gone Wrong

In Huerfano County, the possibility of a fracking boom has been on the minds of residents for a while now. While some have welcomed the oil and gas industry with open arms, others are worried about what this might mean for their communities. KRCC’s Jake Brownell has this story of a group of concerned citizens in Huerfano County, and the challenges they’ve faced in their attempts to be heard.

To learn more about the Citizens for Huerfano County, head to their WEBSITE, where you'll find a timeline of their lawsuit, information about proposed wells in the county, and much more.

HERE is a site outlining the steps taken by Shell and Huerfano County residents in third-party-moderated community forums. Shell sees these forums as an important way to address concerns and to ensure transparency as they do their work in the region.

Members of Citizens for Huerfano county urge people to regularly check the COGCC's WEBSITE to learn about new drilling permit applications in their communities. The "permits" section of the site is searchable by county, and every permit is listed there along with documents and plans pertaining to it.

State regulators recently implemented new fracking regulations with regard to groundwater protections. But environmental groups and some communities in Colorado, particularly along the heavily populated Front Range, say the new rules don't go far enough. Some city councils and county commissioners have imposed moratoriums on fracking, and this past November voters in Longmont overwhelmingly approved an outright ban on fracking within City limits. As Maeve Conran reports, that ban has drawn the ire of state regulators and the oil and gas industry with 2 lawsuits pending against the city.

The Colorado Oil and Gas Association, or COGA, filed the lawsuit in reaction to the passage of ballot question 300. They weren’t available for an interview on tape for the story, but issued a statement that said Longmont’s ban on fracking is an illegal ban on oil and gas activity that denies private mineral rights owners the right to develop their property. It went on to say that the ban will economically damage Longmont with lost tax dollars and lost mineral royalties. COGA says they hope the lawsuit against the city will be resolved quickly.

While Longmont faces several lawsuits, Colorado Springs officials are trying to write rules that won’t land the city in court. The council can regulate other industries, but as KRCC’s Liz Ruskin reports, its powers are limited when it comes to oil and gas development.

Council is working on its oil and gas regulations this month but a final vote is weeks away.

While the techniques of hydraulic fracturing only recently come to the public attention, much of the physical labor of drilling on rigs is still performed by roughnecks. In this piece, The Big Something's Noel Black spoke with artist Streeter Wright, a roughneck who paid his way through college on the rigs of Eastern Utah and Western Colorado. Here, Wright describes the life and culture of the rigs to original music composed for this piece by local musician Alex Koshak.

Streeter Wright and his art was previously featured in The Big Something:

Artist Streeter Wright has been paying his way through Colorado College for the past five years by working as a roughneck on the gas rigs in Western Colorado. The schedule is grueling: 14 days of 12 hour shifts followed by 14 days off. While he's working, Wright takes pictures of the people, tools and machinery on the rigs, which he then transforms into detailed pencil drawings on small pieces of vintage notebook paper he found in his grandparents' storage locker. The resulting 34 drawings shown here have the look, feel and attention of a naturalist's sketchbook discovered in an old trunk—a guidebook to the culture of the rigs. In this audio-slideshow, Wright walks us through a world that few outsiders ever visit.