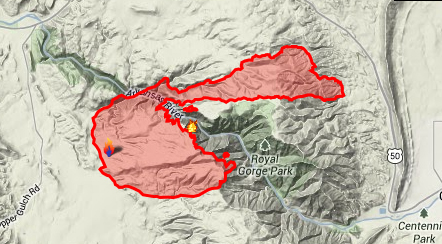 Officials announced around 6:30 Sunday evening that the Royal Gorge Fire near Cañon City is now 100% contained. Smoke may still be visible due to interior pockets of unburned fuel inside the containment lines, but crews finished mopping up the perimeter today. Command control will transition back to local departments at 6 am. The final size of the blaze is 3,218 acres, with the majority of it having burned in Cañon City. Other burn areas include private land and Bureau of Land Management land. The cause remains under investigation.