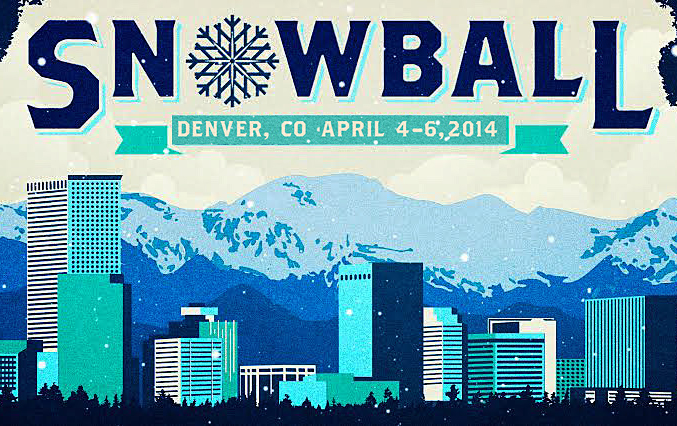 (Photo: courtesy of the Snowball Music Festival)Chad Donnelly is the producer of SnowBall festival, an annual three-day music event in Colorado. Donnelly founded the festival in 2011 and branded it as the ultimate marriage of “music and mountains.” Now in its fourth year, SnowBall moves away from previous mountain resort locations of Avon and Winter Park, Colo., to Denver’s Sports Authority Field.

We spoke with Donnelly about the circumstances that led to SnowBall’s relocation, the electronica scene in Colorado, and how the big music festivals are taking notice of the electronic music genre.

And be sure to head to our Facebook page for your chance to win a free pair of tickets to the festival! The contest ends Tuesday, April 1 at noon.

OPENAIR: Take us back four years ago. What was the rationale behind starting up SnowBall fest in Colorado?

CHAD DONNELLY: I’m from Colorado, so I grew up skiing and always celebrating the wild weather we have here. I was also fortunate to experience a lot of live music in different environments when I was young.  But I believed there was something missing here in terms of a winter music fest. So later on, I wanted to take the Colorado aspect and merge it to a unique festival experience.

In its first three years, SnowBall took place in the mountain resort towns of Avon and Winter Park. This year the fest moves to Denver. Why move to an urban setting now when the mountain locale featured as an integral part of the SB experience?

There’s no doubt the mountain setting has played an integral role in our development. It’s always complex putting on an event for tens of thousands of people. This year, with scheduling conflicts and timing we weren’t able to secure a mountain venue that would work. And what we had to decide was: does the show go on? Do we alter a few things to continue to bring this community together? After many sleepless nights we made the decision that is what we would do.

I think going back to what we’ve learned is that I believe that this brand does belong in the mountains, no question about it. Our fest in California (SnowGlobe) runs under the same premise as SnowBall. Fortunately over there we’ve been in the same town for three years. Getting that consistency from our host town has afforded us the opportunity to grow the right way and establish it in the community. We’re certainly looking for the right long term partnership for SnowBall, and we’re definitely pushing to make that happen in 2015.

How do you think this new site will affect the festival experience compared to years past?

I truly believe experiences are what you make of them. The venue we have in Denver now allows us some opportunities we haven’t had in the past. An abundance of lodging, convenience, and public transportation, all make the experience more affordable. You have to look at the advantages and disadvantages. Do we take a year off and miss out on an opportunity to bring a community together with music and art, or do we push forward with it? We decided to push forward.

The state of Colorado continues to gain a reputation as a mecca for electronic music. Two of the biggest names in the genre (Pretty Lights, Big Gigantic) hail from here, we have a premier venue where electronic acts like Bassnectar and Skrillex easily sell out two night double-header shows, and last summer Rolling Stone named Denver’s Beta the #1 dance club in America. You’re a Colorado native yourself, why do you think the genre maintains a particularly strong reputation here?

I think one of the driving forces I attribute that to is the amazing job our local artists have done to create these genres within a genre. Pretty Lights in particular has pioneered this “jamtronica” sound of a jam band influence with electronic music.

Going back to those artists you mentioned selling out Red Rocks, those aren’t your more straightforward DJs like Tiesto and Afrojack and Avicii. The folks in Colorado appreciate a certain type of electronic music more than others. Having those unique artists hailing from here has really helped develop the scene.

You’ve described SnowBall as a “boutique festival.” Looking at this year’s lineup, I see EDM (electronic dance music) still dominates, but there’s plenty of rap, indie, rock, and a fair share of local Colorado bands. Do you find those acts draw a demographic to the festival that might not necessarily consider attending an-EDM music fest?

Diversity is certainly very important to us. If you look back over the three years of the fest we typically have featured electronica: Pretty Lights to Bassnectar to Big G. But we’ve also had headliners like the Flaming Lips and Snoop Dogg.

Anytime you go to a festival there’s a dozen or so artists you may know and love, and that’s what initially brings you there. But one thing that’s so cool about the festival atmosphere is that you come out loving new artists and being exposed to something you otherwise wouldn’t have.

I’m personally most excited about acts like Yeasayer and Australian act RÜFÜS. That’s a band that’s selling out shows in Los Angeles and San Francisco. I would imagine a majority of people in Denver haven’t listened to them, but I’m hoping they come out of the fest as new fans from seeing their set at SnowBall. That’s one of the coolest parts about a festival.

Beyond EDM-heavy fests like SnowBall or Ultra in Miami, any major US music festival nowadays seemingly must have an EDM headliner: Skrillex will be at Lollapalooza, Coachella, and Bonnaroo, Zedd at SXSW and Bonnaroo, Calvin Harris at Lolla and Coachella, etc. Do you think that’s simply a strategy for festival organizers to boost attendees by tapping into a particularly popular genre, or are fans of typically rock and indie-centric music fests becoming more and more open to seeing these acts?

The reality is that dance music has become very mainstream over the past few years. You don’t have to look any further than radio or the media to recognize that. Fans who are typically going to Bonnaroo to see jam or rock are being exposed to acts like Pretty Lights and embracing them. I think that’s one of the coolest things about music: it can move you in different ways regardless of what it is. If you’re open to an experience you have the ability to be moved by different sounds.