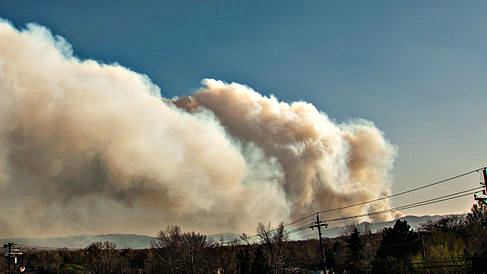 (Photo courtesy of Shawn Campbell)After two days of hearings, the state claims board is recommending lawmakers pay out $12.5 million in damages to some of the victims of the 2012 Lower North Fork Fire near Conifer, Colo. It's a figure which some families say underestimates the gravity of their losses.

Colorado is on the hook for fire compensation because the blaze started as a state Forest Service prescribed burn before blowing up out of control, destroying 22 homes and killing three people. Afterward, legislators changed the law to allow victims to receive damages well above Colorado’s usual state liability cap. But the new policy covers only economic losses, not pain and suffering.

Some families have already settled with the state, but 21 others sued in federal court. When their claims were dismissed last month, Colorado officials offered to put the case in front of an independent panel of arbitrators. That group, made up of retired judges, set the total due to the families for both tangible and intangible losses at more than $16 million.

Attorney Bill Finger, who represents many of the victims, accuses the claims board of "lowballing" its payout by covering only economic damages and not including any award for the emotional toll of the fire.

But Attorney General John Suthers, who sits on the state claims board, says that while he's sympathetic to the families' disappointment, he has to follow state law.

"This is a very tragic situation," Suthers says. "But I think that the legislature has done, given the competing considerations and the fact that we’re talking about taxpayer dollars...a pretty good job."

The largest offer from the claims board is nearly $3.2 million for Scott Appel, whose wife Ann died in the fire. Sam and Linda Lucas, a couple in their 70s, also died and the state is offering their family $408,000. Neither of those settlements include money for emotional distress or loss of life.

Suthers is urging the Lower North Fork fire families to decide quickly whether to accept the state’s damage offer, in order for their claims to be included in the budget for next fiscal year, which is currently being finalized.