Members of the Sphere Ensemble made their own contribution to the classical flash mob fad with an appearance Monday at the University of Colorado’s student center in Boulder.

The Denver-area string ensemble’s musicians filed into the campus Center for Community at lunchtime and played Pachelbel’s Canon in D with individual members adding their parts one at a time.

“I think it’s fantastic. It’s nice to have music playing in the C4C while you’re having lunch,” said Akshay Gavai, a graduate student pursuing a master’s degree in Business Administration.

As much as onlookers enjoyed the performances, the enthusiasm displayed by the ensemble’s members was also remarkable. Violinist Marcin Arendt danced his way around the atrium.

Video of flash-mob-style performances by classical ensembles, like this one staged at a Michigan IKEA by members of the Detroit Symphony, have become viral hits online in recent months. 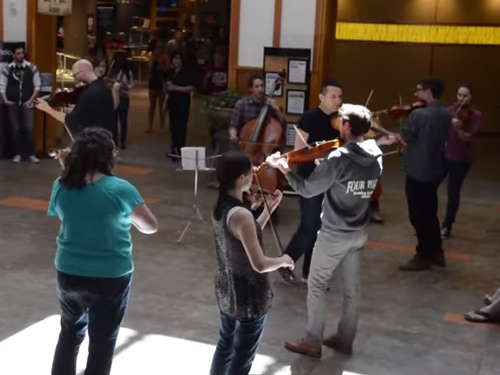