Updated: 4:20 p.m.: The Colorado Symphony and the Central Presbyterian Church in downtown Denver are in close discussions about the church becoming a temporary home for the orchestra.

There isn't a contract yet.

But church leaders and Colorado Symphony CEO Jerry Kern confirmed a letter of intent has been drafted and exchanged between the two organizations in a step towards sealing the deal.

The orchestra must vacate Boettcher Concert Hall next summer for at least a year while the venue undergoes renovations. The Symphony has been at the venue for close to four decades as part of the Denver Performing Arts Complex.

If the letter of intent is signed by the Central Presbyterian Church and the Colorado Symphony, Kern says the partnership between the two organizations would last for longer than previously expected.

“The commitment to Central Presbyterian cannot be a one-year commitment," Kern said in a phone interview on Monday. "If we are to spend the money with them, we would have to amortize that over at least five years. So a move to the church is not one year out and then move back to Boettcher.”

Kern also said a possible move to Central Presbyterian could happen as early as next January. That depends on how quickly the church is able to complete upgrades to make the 1,100-seat venue ready for orchestral performances.

Before vacating Boettcher Concert Hall, Kern says the Symphony only needs to provide the city with three-months notice. The City of Denver  is the Colorado Symphony's current landlord.

Kern would not provide specific financial details about the transaction with the church.

But the CEO says a partnership with Central Presbyterian would save the Symphony at least $2 million over what the organization currently pays the City of Denver to perform at Boettcher Concert Hall. That savings would be over five years.

Colorado Public Radio contacted the City of Denver for its take on the Colorado Symphony's proposal. A spokesperson said the city has nothing new to share on the subject at present.

On Sunday, church leaders informed the congregation of the proposal during service. They followed up immediately afterwards with a town-hall style meeting so people could ask questions and share their views about the plan.

Chris Wineman is a church member and a principal at the Denver-based architecture firm Semple Brown Design, the company behind the renovation of the Ellie Caulkins Opera House among other cultural building projects. He's the main liaison between Central Presbyterian and the Symphony.

Wineman says drafting a letter of intent is helping both sides to clarify the nature of the partnership.

"That was our process for finding out whether or not we were largely in agreement on the important issues. I think that we are," Wineman says.  "We still have to fine tune it. Both parties need to sign it. And we need to exchange some money."

Under the proposed plan, the Symphony would pay Central Presbyterian rent in exchange for the use of the facilities for concerts. According to Wineman, the rent would help defray the cost of needed improvements to the late 19th century building including adding air-conditioning in the sanctuary and more restrooms.

The rent would also cover the replacement of the church’s antique pews with concert-style seating. The stage at the front of the sanctuary would be extended to accommodate the orchestra's 70 to 80 musicians and covered with a wooden surface. Currently the stage is carpeted.

Wineman says that when the Symphony's residency at Central Presbyterian ends, the church would have the option of restoring the pews.

After the service, members of the Central Presbyterian congregation were overall positive about sharing their space with the Colorado Symphony.

"I'm a strong supporter of the CSO and the arts in Denver," congregant Paul Linton says. "I feel that it would be a good fit."

"There's a lot of excitement about the possibility," church member Mark Earnest says. "The congregation is very committed to the building. That commitment would be shared more broadly within the community around something like classical music which we see as a very aligned interest to the goals of the congregation."

But Earnest also admitted much needs to be done on both sides to make the collaboration work.

"There are a lot of questions that need to be resolved," Earnest says. "If a partnership is to be made it is going to have to be such that the church's needs for the space are not compromised significantly. And the Colorado Symphony is going to have to make sure that the building meets its needs as well." 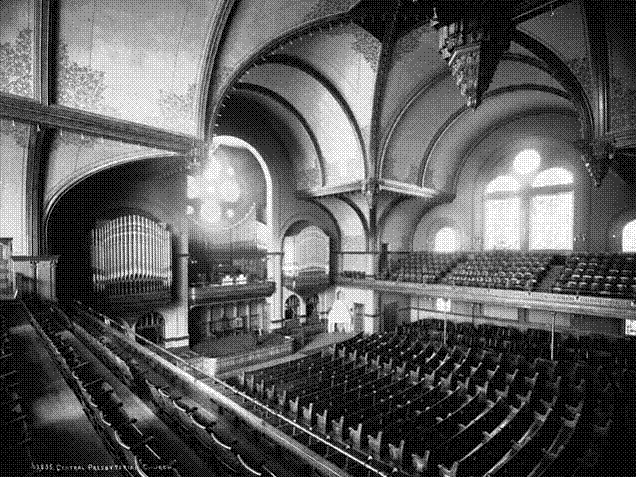 (Photo: Courtesy of the Colorado Historical Society)The Central Presbyterian Church has its roots in the performing arts. It was built in 1892 by Frank E. Edbrooke (1840-1921) who was also the architect of the Brown Palace Hotel in downtown Denver.

While the church was being constructed, congregants worshipped in the theater space of another Edbrooke-designed building, the now-demolished Metropole Hotel at 18th and Broadway. Edbrooke created the box seats that line the sides of the Central Presbyterian Church in response to worshippers' positive experience of holding services in the Metropole theater, Wineman says. 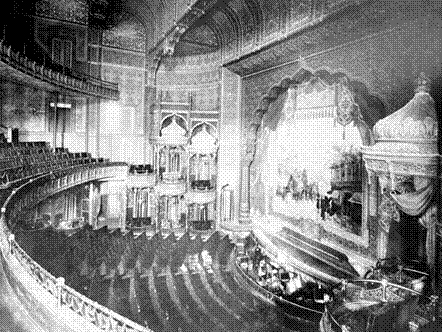 (Photo: Courtesy of the Colorado Historical Society)In more recent years, the church has hosted events by a range of performing arts organizations. These include the Denver Concert Band, which had a longstanding relationship with the church in the 1990s, and the Denver Brass. Many choral ensembles have also performed at Central Presbyterian.