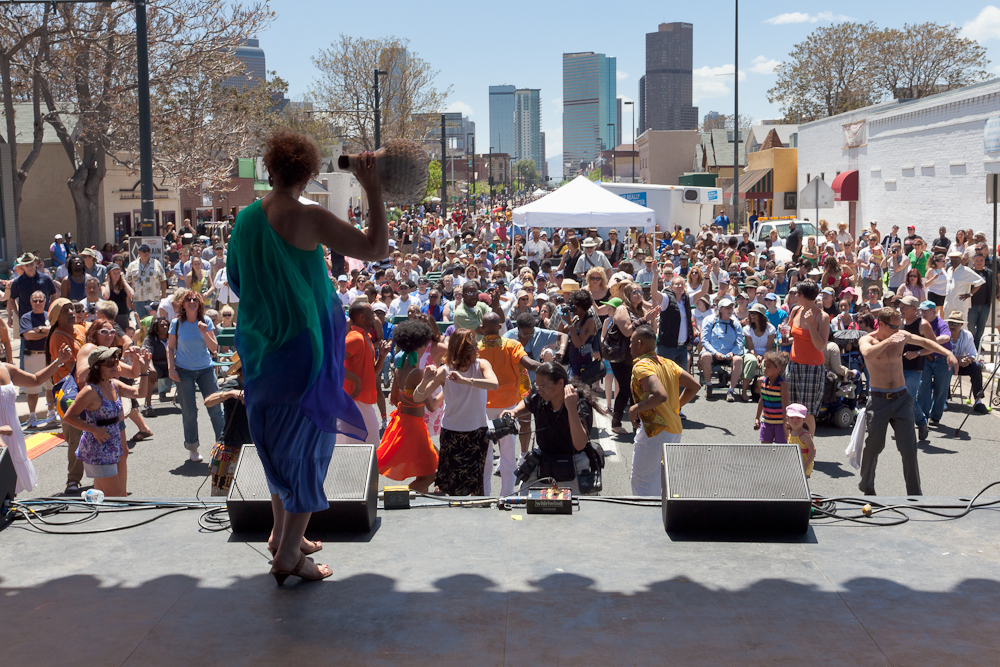 (Photo: Courtesy of Denver Arts & Venues)Once known as the Harlem of the West, the Five Points neighborhood in Denver has a history rich in the melodic scats and smooth harmonies of jazz.

Dating back to the 1930s, the area was home to several famous jazz clubs, like the Rossonian Hotel and the Rainbow Ballroom. These venues hosted performances by local artists and famous touring musicians like Ray Charles, Miles Davis and Thelonious Monk.

Eleven years ago, a small group of Five Points community members organized a free performance with a handful of local bands outside the Blair-Caldwell African American Resource Library to highlight the neighborhood’s cultural past.

This was the birth of the Five Points Jazz Festival, which returns this year on Saturday, May 17.

Since its inception in 2004, the festival has grown from its original roster of five or six bands to more than 30 local and national bands. They perform on nine different stages around the Welton Street corridor, the main thoroughfare through the neighborhood.

Terry Nelson, the senior  special collection and community resource manager at the Blair-Caldwell Library, helped to spearhead the festival and has a deep knowledge of the Five Points neighborhood and its cultural legacy.

She joined Colorado Public Radio arts editor and host Chloe Veltman in the studio earlier this week to talk about the origins and growth of the Five Points Jazz Festival and why Denver’s jazz heritage matters.

CPR: The first Five Points Jazz Festival occurred in April 2004. Who was involved in the launch and why did you launch it?

Terry Nelson: It was organized by the City and County of Denver’s Art, Culture and Film – now known as Denver Arts & Venues. That organization wanted to talk about the distinguished jazz history of Five Points. The neighborhood is actually the first and only cultural district in the City of Denver. So the festival aimed to really honor the people who have performed at the neighborhood’s famous Rossonian Hotel and Casino. Five Points was actually once called the Harlem of the West because entertainers came from the east, New York, etc. They would came as far as Denver, perform and make enough money to then go to the West Coast. So we were right in the middle of the sandwich.

CPR: Take us back to the first year. How many bands did you have? What were some of the initial obstacles?

Terry Nelson: We had about five or six bands perform in the parking lot of the Blair-Caldwell African American Research Library. It was the end of April, which was jazz month, and it snowed. We thought that was the end of the concert because we didn’t think anyone would show up. But all of the bands showed up and people came to Five Points to hear jazz in the terrible weather without any coverage. We went on with the show and everyone had a wonderful time.

CPR: How would you compare this festival to other jazz events around Colorado such as the Telluride Jazz Festival, Jazz Aspen Snowmass Festival or Vail Jazz Festival?

Terry Nelson: We have very highly skilled, well-known musicians as well as those that are growing. That would be the difference – those festivals would not have as many new bands that are starting to become famous as the Five Points Jazz Festival does.

For the full interview, tune into CPR’s weekly arts show, The Colorado Art Report, on Friday at 10:30 a.m. and 7:30 p.m. For more information about the Five Points Jazz Festival or to see a lineup of the performers, visit ArtsandVenuesDenver.com.