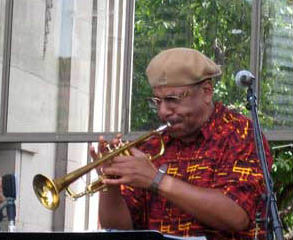 (Photo: Courtesy of Buckner Funken Jazz)The history of Five Points is fueled by the sounds of jazz.

“Five Points way back in the day used to be like a little Harlem,” trumpeter and vocalist Rob Buckner says. “We had Count Bessie, Duke Ellington, B.B. King, Ella Fitzgerald, Miles, Dizzy, Coltrane, and they all played down at the Rossonian Hotel and Casino.”

Buckner performs with Buckner Funken Jazz, an old-school, seven-member funk and jazz ensemble based in the metro area. The ensemble is one of the bands playing the Five Points Jazz Festival’s main stage Saturday.

Buckner and many of his bandmates remember the jazz heydays of the neighborhood. It was a time when they dressed to the nines, hit the best jazz clubs in Five Points and had a grand time. Some of them even had the chance to rub elbows with the great musicians that helped make Five Points such a mecca for jazz.

“I met Herbie Hancock at a club in Five Points,” Hill says. “I had a chance to sit down and talk with him for 20 or 30 minutes. I was telling him I was a musician and he told me to keep it up.”

Buckner Funken Jazz gave CPR an exclusive preview of one of its songs.

“Five Points Strut,” the title of the track, aims to evoke the essence of Five Points back when jazz was alive and jamming in every hotel and club along Welton Street.

Buckner says the tune is inspired by the stories he heard from his parents, aunts and uncles while growing up. These stories centered on Five Points in the 30s, 40s and 50s.

“‘Five Points’ is a dedication to my mom and dad,” Buckner says. “When they were young, they used to be around Five Points and went to different clubs and had a great time.”

Buckner Funken Jazz performs on the main stage at the Five Points Jazz Festival this Saturday, May 17 at 11 a.m.