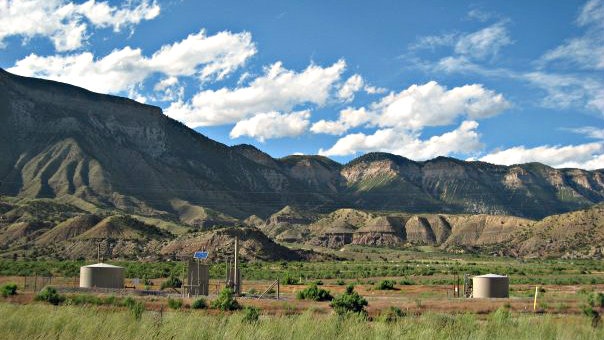 (Photo: CPR/Megan Verlee)Opponents of oil and gas development in the White River National Forest are getting another shot at trying to block drilling there.

The Bureau of Land Management is reviewing 65 parcels it leased over the last two decades, none of which went through the proper environmental review process. The new study could lead the BLM to cancel some or all of the leases or require stricter environmental mitigations. Or it could uphold the original drilling conditions and allow development to proceed.

Deciding what to do with the leases won't be easy, according to BLM spokesperson Steven Hall.

The BLM recently closed public comment on the environmental review, including four meetings on the Western Slope: three in the Roaring Fork Valley and one in the town of Debeque.

"We certainly heard from a broad range of constituents," Hall says, "with points of view that ranged from cancel all the leases to uphold all the leases and encourage development as often as you can."

Environmental groups claim that many of the parcels are too sensitive for drilling.

"These are lands that are really some of the last best places in Colorado," Michael Freeman, with the group EarthJustice, says.  EarthJustice submitted comments urging the BLM to cancel all the leases.

Freeman points out the leased areas cover numerous roadless areas and include habitat for the Canadian lynx and cutthroat trout, two threatened species.

But industry groups argue that canceling leases years after they were issued would be a bad precedent with potentially widespread impacts.

"We believe it could have a ripple effect throughout the energy industry," David Ludlam, with the Western Slope Colorado Oil and Gas Association, says. Ludlam adds that canceling contracts could also have a chilling effect on companies that rely on federal timber or grazing leases.

In a letter to the BLM, a consortium of industry groups accused the review process of being manipulated by wealthy Aspenites who are using their political influence to prevent any drilling near near their homes.

A decision on the White River Forest drilling leases is expected in 2016.