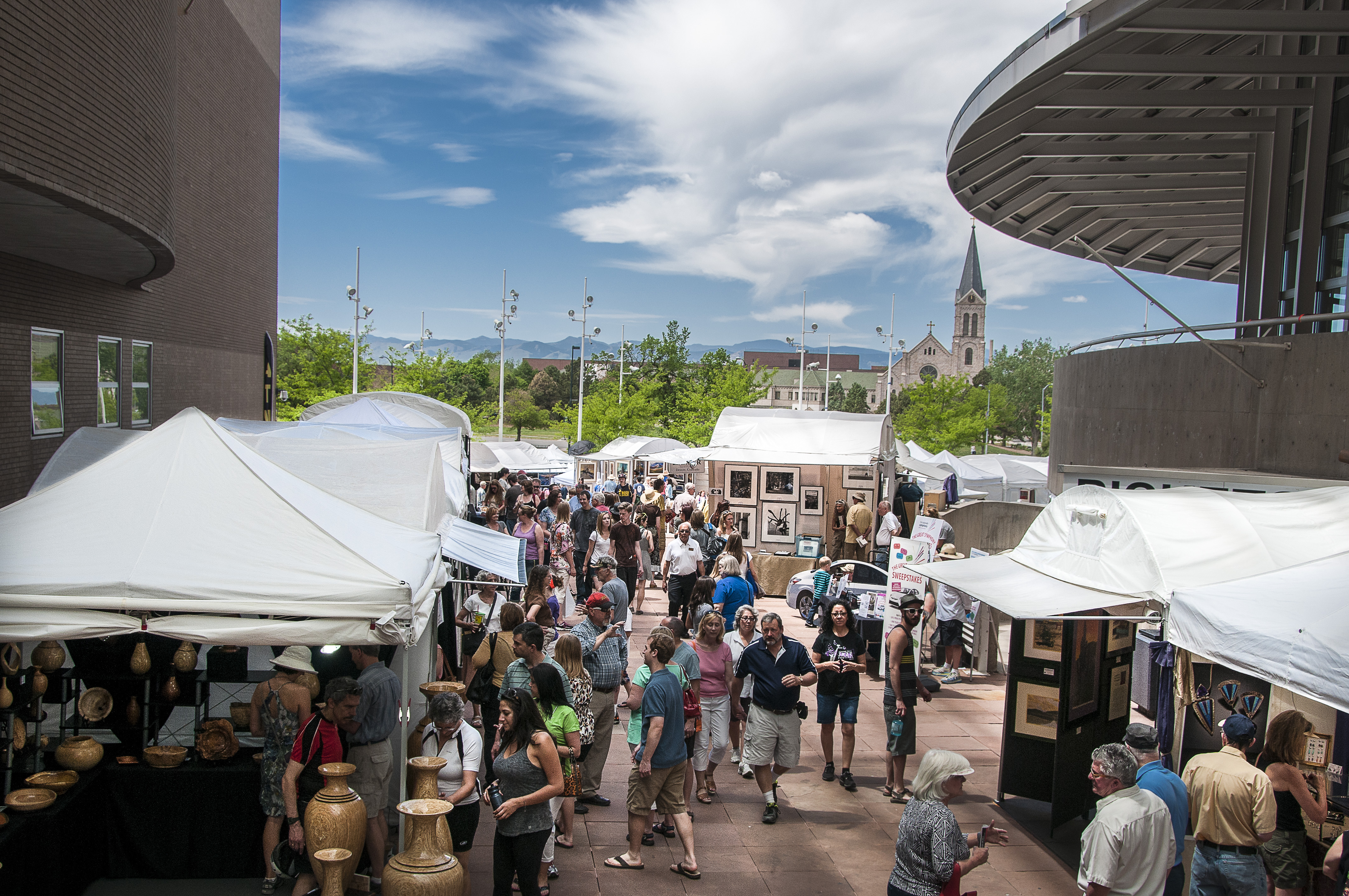 Now in its 16th year, the Festival features jewelry, paintings, photography, ceramics, fiber arts, sculpture and other forms of art.

Colorado photographer Jim DeLutes has showcased his work in the festival since the first year. Eight years ago, DeLutes became the event’s director.

DeLutes spoke with Colorado Public Radio about how the Festival has grown since its inaugural year and some of the highlights of this year’s event.

CPR: Can you take us back to the early years of the Festival and expand on its history? Who started it and what was their initial motivation for launching such an event?

Jim DeLutes: The initial group of people who started the event did so to create a fine arts festival that would showcase the artists in Colorado. I was not a part of this original group, but I have been an artist in the Festival since the beginning. During the first eight years, the management went through some changes and, eventually, went out of business. There was a good chance that the show would no longer exist, which is why I stepped in. I wanted to rebuild the show back to its original premise of being a great arts festival that supports Colorado artists.

CPR: You became director and owner of the festival eight years ago. How has the festival grown and changed since you’ve taken over? What does it mean to have the festival back at its original home, the Denver Performing Arts Complex?

Jim DeLutes: When I took over the show, there were many hurdles to overcome because the show had fallen out of favor with artists and sponsors due to past mismanagement. It took several years just to rebuild this trust with everyone. Since I took over the festival, it has gone from being ranked somewhere in the 400s out of 600-plus national shows nationally to currently being ranked as 33rd in the country. These rankings are from the Art Fair Sourcebook, which is considered the most recognized art fair guide in the country. The size of the show is still small in comparison to other festivals across the country, like La Quinta Arts Festival in La Quinta, California, Old Town Art Fair in Chicago, Illinois and even the Cherry Creek Arts Festival here in Denver. This year we have 145 artists. Most arts festivals have two to three times that many artists. But I feel that the smaller scale makes it more manageable for the public to walk the entire festival and not feel rushed. Being back at the Denver Performing Arts Complex has brought the festival full circle since that was the original home. Bringing the visual and the performing arts together in one place works well since we often share the same demographics. We saw an increase in the quality of the clientele that came to the event last year when we returned to DPAC. It’s also great to be able to have Opera Colorado and the Colorado Symphony as participants in the festival.

CPR: The festival was built on the foundation of supporting Colorado artists. How many local artists are in the show? Can you highlight a few of them?

Jim DeLutes: This year we have more than 85 Colorado artists. Most festivals around the country may have as few as 12 to 15 local artists being represented in their shows, but our emphasis is really on local talent. This year we have many returning artists including Stefan Geissbuhler, a painter who was born in Switzerland and pursued his art career once he moved to the U.S. in 1992. Also returning this year is pencil artist JD Hillberry, who has done the show every year since its inception. JD published a successful book called “Drawing Realistic Textures in Pencil,” which has sold over 80,000 copies worldwide. We also have many new Colorado artists on the roster this year.

CPR: You also showcase a select group of national artists. Can you talk about some of the national artists featured during this year’s festival? Where are they from and what mediums do they work in?

Jim DeLutes: We have some amazing national and international artists this year. Returning is 2012 “Best of Show” artist Kevin Zuckerman. Kevin is an oil painter, who has lived in Japan, Thailand, Greece, Spain and Switzerland. He currently resides in New Mexico. We also have international artist Yoram Gal from Israel. He works in 2-D mixed media and also writes stage plays and screenplays. He has won international awards for his writing in feature films and plays. We are thrilled to have him in the festival this year.

CPR: Besides shopping for art, what other activities can attendees enjoy at the Festival?

Jim DeLutes: We really try to keep the focus on the art, so we do not have a lot of other activities. However, this year we do have live music on Friday, May 23 from 4:30 to 7:30 p.m., featuring jazz and blues bands. Additionally, wine and beer as well as desserts to celebrate our “Sweet 16” anniversary will be available for purchase. Throughout the weekend, we will also have performances from Opera Colorado and the Colorado Symphony. All of it will hopefully help put people in the mood to enjoy the art and take some home with them.

The Downtown Denver Arts Festival runs Memorial Day Weekend, May 23 through 25 at the Denver Performing Arts Complex. For more information about the festival and its artists, visit DowntownDenverArtsFestival.com.