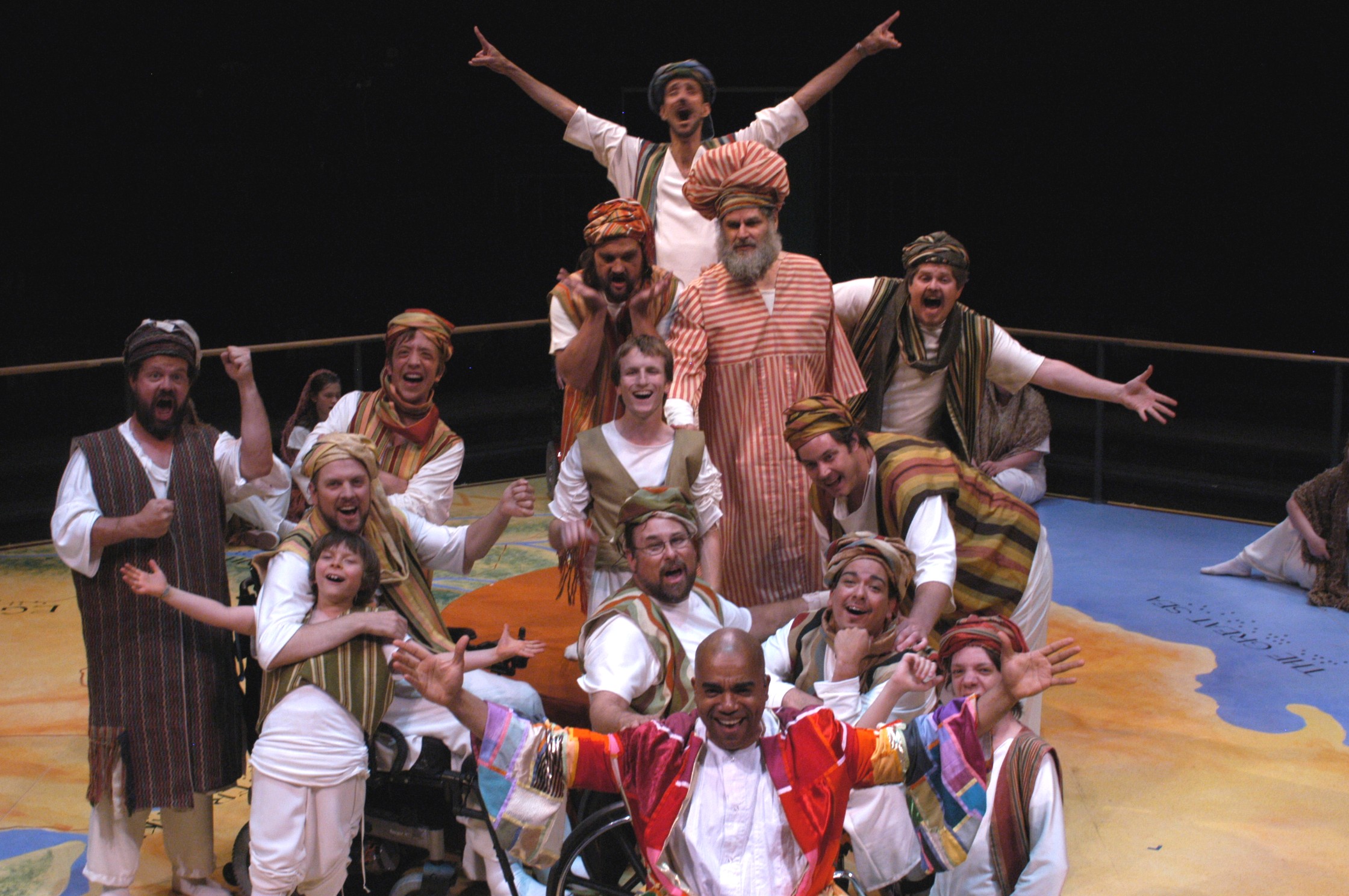 Imagine being told you could not pursue your dreams of acting simply because you are in a wheelchair.

Actors Kevin Ahl, Kathleen Traylor, Gregg Vigil and Teri Westerman experienced this frustration in 1989 when several theater directors turned them away before they even auditioned due to their physical disabilities.

The five actors, who were students at Denver’s Boettcher School for disabled children, formed the Phamaly Theatre Company to create their own opportunities as well as a place for others with disabilities to perform in an environment they felt accepted.

In 1990, Phamaly Theatre Company produced its first production, the 1950s musical about gangsters and showgirls “Guys and Dolls.”

On July 10, Phamaly’s production of “Joseph and the Amazing Technicolor Dreamcoat” returns to the Space Theatre at the Denver Performing Arts Complex as the featured musical for the theater company’s 25th anniversary season.

Executive director Chris Silberman joined Phamaly’s staff in summer 2010. He says this musical is a fitting production for his company because it emphasizes the pursuit of goals in the face of undeniable odds.

Silberman adds that Phamaly hopes to use professional theater shows like “Joseph and the Amazing Technicolor Dreamcoat” to help both audiences and performers think differently about disabilities.

“Ultimately, it is our goal that the focus is on the abilities of individuals with disabilities, not what they cannot do,” Silberman says. “For performers, this can mean pushing the boundaries of what they believe to be possible for themselves. For audiences, stereotypes are broken down and hopefully we are promoting a more inclusive society as a result.”

At the beginning of June, the Denver theater company announced that it plans to take another musical, “The Fantasticks,” to Osaka, Japan in March 2015.

With these big theatrical undertakings in Phamaly’s near future, Silberman spoke with Colorado Public Radio about the catchy tunes and story behind the upcoming musical as well as heading to Japan with a disabled cast.

CPR: Can you comment on the storyline and themes behind “Joseph and the Amazing Technicolor Dreamcoat”? How has the production been adapted for Phamaly?

Chris Silberman: The musical was the first collaboration of British lyricist Tim Rice and composer Andrew Lloyd Weber. It is performed as a rock opera with very little spoken dialogue. The music is undeniably catchy with a blend of pop, rock and country styles. The story is based on the biblical story of Joseph in the Book of Genesis, and there is an overarching theme to dream big. Joseph’s brothers notice his ambitions and sell him into slavery in order to quell his dreams. However, he rises through the ranks and becomes the most powerful man in Egypt, second to only Pharaoh himself, who is portrayed in the musical as an Elvis-type personality.  Artistic director Steve Wilson has put a unique twist on the story. The show opens up in an institution for patients will mental disorders. Phamaly performed the production once before in 2005. Leonard Barrett Jr. returns as the narrator, but the rest of the cast is largely new. Daniel Traylor, who grew up in Phamaly and played one of the brothers in 2005, will be performing the role of Joseph this summer.

CPR: The music, a melding of pop, rock and country, really drives this show. Do you have any favorite musical moments?

Chris Silberman: I will warn you that the songs seep into your psyche. I’ve found myself singing “Joseph’s Coat” and “Red and Yellow and Green and Brown” a lot lately. But I think my favorite musical moment is “Close Every Door” with its haunting lyrics and modal melody.

CPR: At the beginning of June, Phamaly announced it will take “The Fantasticks” on tour to Japan in March 2015. This is the company’s first international tour. Has Phamaly done any regional or national touring before? Why did you decide to travel with “The Fantasticks”?

Chris Silberman: We have only toured throughout Colorado so far with youth-oriented shows. We will be performing our first out-of-state show this November with a musical adaptation of “Rapunzel” in Laramie, Wyoming. So this tour to Japan with “The Fantasticks” will be quite a new accomplishment for us. We chose “The Fantasticks” because the storyline is a love story and one that can be universally appreciated and it has history as the world’s longest running musical. Additionally, the cast size is relatively small so it will be easier to travel. And the set elements are minimal so they will be easier to ship internationally.

CPR: It’s challenging to tour a production and get the sets, costumes and cast to the destination. How will you accommodate the additional needs of your actors and crew?

Chris Silberman: The venue where we are staying and performing, International Communication Center for Persons with Disabilities -- also known as “Big I” -- offers state-of-the-art accessibility options for a variety of disabilities, whether a person is blind, in a wheelchair or has another physical disability. The venue is probably the most accommodating I’ve ever seen. They have thought this out for disabled audiences too. In the performance hall, the flooring can either be on a gradual rake for standard theater seating, or it can be positioned to be flat for wheelchair seating. For actors who require extra health care assistance or caretaking, the Center additionally offers staff for these purposes. It’s truly remarkable.

CPR: Phamaly recently lost actor Troy Willis, who died on June 12 of complications from a kidney transplant. Would you like to say a few words regarding Willis’ passing and his contributions to Phamaly?

Chris Silberman: Troy was a friend and one of the first actors I met when I joined Phamaly four years ago. His passing came as a shock to all of us. Sadly, with the nature of what we do and who is involved, we have experienced a large number of actors who have passed over the years. Troy was particularly sad for me because he is the first to pass that I knew personally. I knew this day would come, in which somebody I knew and loved passed away, and I have dreaded it. I actually found out after working on a project until about midnight one night. I was frustrated and tired and the news stopped me in my tracks and reminded me of how important Phamaly is.