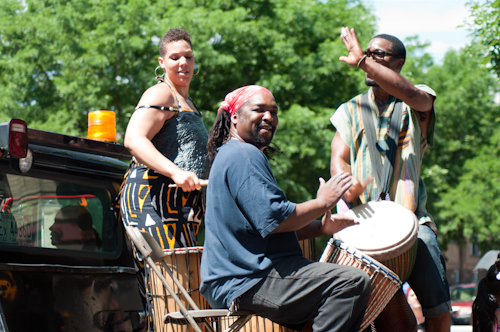 (Photo: Courtesy of Joe Neely)Thousands of different languages and dialects, each distinct to its locality, exist in Africa. The continent’s indigenous music reflects the linguistic diversity.

Stephan Griffin, music director of the Umoja Dance Company, a drum and dance collective in Denver, says the tonal qualities of the drums his group plays reflect the region's many ways of speaking.

“The indigenous people of Africa -- when they created the drums -- created a dialect that went along with the drums as well as their language,” says Griffin, who has led the troupe since its inception in 1995. “So the drum speaks. When they play the drums, they don’t have to talk to each other. The drums are talking for them.”

The ensemble uses two sets of drums native to West Africa -- the djembe and djun djun -- to cultivate this musical speech.

Certain tones or notes indicate specific messages, like “start the music,” “change the music” or “start to dance.”
“That’s how we communicate with each other when we’re performing,” Griffin says.
Umoja Dance Company is one of the troupes headlining on the cultural stage at this summer’s Colorado Black Arts Festival (CBAF), which kicks off next weekend in Denver’s historic City Park West neighborhood.
The three-day celebration of African American culture began as the Denver Black Arts Festival in 1986. It was co-founded by brothers Perry Ayers and Oye Oginga, who collaborated with a small group of Colorado artists to launch the inaugural event.
Now in its 28th year, CBAF features a marketplace with food and retail vendors, a parade and live performances showcasing a number of Colorado, African American performers from Colorado and elsewhere around the country and globe.
The Joda Village Stage is named after African drum and dance master Atetunji Joda, who came to Colorado from Nigeria. It is one of three performance spaces at the festival -- the other two festival stages are the Gospel Stage, where nationally and internationally recognized gospel groups perform, and the Kuumba Stage, which features R&B and jazz artists.
Griffin, who studied and worked with Joda before his passing in 2011, refers to the guru as the “Father of African Drum and Dance in Colorado.”
“He was very instrumental in creating this environment of African drum and dance here in Colorado,” Griffin says.
Umoja Dance Company gave CPR an exclusive performance of a song and dance that celebrates the harvest of the ethnic groups in the region. Originating in Guinea West Africa, the track is entitiled “Koukou.”
Listen to Umoja Dance Company perform “Koukou” on this Friday’s arts show at 10:30 a.m. and 7:30 p.m. or listen to it in its entirety online at any time.
The Colorado Black Arts Festival runs July 11 to 13 in Denver’s City Park West. Umoja Dance Company performs Sunday, July 13 at 3 p.m. on the Joda Village Stage. For more information, visit ColBAF.org.