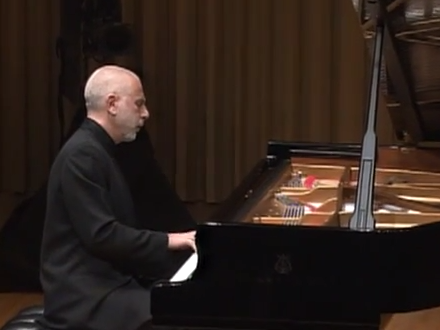 The SummerFest concert broadcast series continues at 7 p.m. Tuesday with a memorable performance by pianist Vladimir Feltsman, recording at the Aspen Music Festival and School in  August 2013. The program:

Feltsman’s biography is as interesting as the many international performances on his resume. Born in Moscow in 1952, the pianist became a U.S. citizen after a prolonged confrontation with Soviet authorities. From his official bio:

In 1979, because of his growing discontent with the restrictions on artistic freedom under the Soviet regime, Mr. Feltsman signaled his intention to emigrate by applying for an exit visa. In response, he was immediately banned from performing in public and his recordings were suppressed. After eight years of virtual artistic exile, he was finally granted permission to leave the Soviet Union. Upon his arrival in the United States in 1987, Mr. Feltsman was warmly greeted at the White House, where he performed his first recital in North America. That same year, his debut at Carnegie Hall established him as a major pianist on the American and international scene.

For a taste of his skills at the keyboard, here’s a performance you won’t hear during Tuesday’s broadcast: Feltsman’s playing Robert Schumann’s “Arabesque."