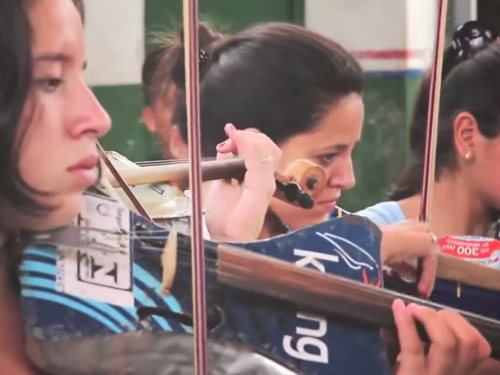 UPDATED SEPT. 10: The performances by The Recycled Orchestra and Berta Rojas have been canceled.

A Paraguayan children’s orchestra that found worldwide fame for performing on instruments cobbled together from trash will perform in Colorado in September.

"The orchestra is what the festival is all about ... the relationship between the Latino community and the environment," festival Associate Director Dalia Dorta said Thursday. "It shows how we can make of the worst something as beautiful as music."

The Recycled Orchestra, which hails from an impoverished town next to a massive landfill, has toured internationally and been the subject of the documentary “Landfill Harmonic.”

Children in Cateura had essentially no access to music until a few people in town began transforming trash into playable instruments. CBS News described one of the instruments in 2013:

The most beautiful instrument that "60 Minutes" producer Michael Gavshon found when he visited the child orchestra of Cateura, Paraguay, was a cello. The body of the cello was fashioned out of an oil barrel, and the tuning knobs were made from a hairbrush, the heel of a woman's shoe, and a wooden spoon--all salvaged by workers from the town dump.

Within a few years Cateura had 35 young musicians in the Recycled Orchestra and 200 children taking lessons. While publicity for the group attracted donors who sent money and hundreds of actual instruments to the town, the ensemble also continues to perform on their makeshift instruments.

The concert on Sept. 11 also features Grammy-winning band La Santa Cecilia. Classical guitarist Rojas will also appear at a young musicians showcase in Boulder on Sept. 13 and perform at the Boulder Public Library on Sept. 15.

Founded in 2013, the Americas Latino Eco-Festival runs Sept. 11-15 in Boulder and Denver. Organizers call it the “the largest Latino themed Environmental Festival in the world” and will offer exhibits, films, panel discussions and other events exploring environmental issues and Latino culture.