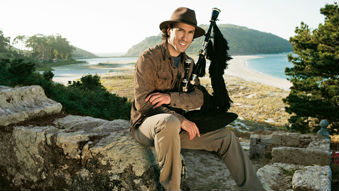 But the headlining piper at this year’s event isn’t Scottish. He’s Spanish.

Virtuoso bagpiper Carlos Núñez hails from Galicia in the northwestern region of Spain. The Celtic Gallaeci tribe settled in this part of the world over a millenium ago, before the area became part of the Roman Empire. Evidence of the tribe's presence is reflected in Galicia’s dialect, art and ancient architecture.

Festival director John Thornton says he invited Núñez, who still lives in Galicia, to participate in the festival because of the musician’s cross-cultural appeal.

“He made Celtic music very international and fit a whole variety of cultures,” Thornton says.

Not only does Núñez bring his own Spanish background into play, but his bandmates represent multiple countries across the globe, such as Mexico and Canada. And listeners can pick up hints of Flamenco, Cuban, Mexican, Brazilian and western classical music in the musician’s tracks.

“The first time I played the bagpipes -- what we call "gaita" in Galicia, where we have a very, very strong tradition of pipes -- I was eight years old,” Núñez says. “They say the pipes came from Galicia to the British Isles, so my feeling with this instrument was so strong. I fell in love with the pipes.”

Unusually for a bagpiper, the 43-year-old Núñez has garnered rockstar status.

In 1997, Billboard magazine pegged the musician “the Jimi Hendrix of bagpipe.” And the Los Angeles Times wrote in a 1995 review, “If it’s possible to become a rock star playing the bagpipes, Núñez could be the man.”

“There is something about the energy of the pipes," Núñez says regarding this crossover from traditional to popular music. "Pipes are the electric guitar of Celtic music.”

While bagpipes are often synonymous with traditional Scottish culture, the bellows-operated wind instrument actually has international origins. Historical references to bagpipes can be traced back to Greece around 100 A.D. Various iterations are also found in North Africa, areas of Russia and eastern Europe, and Latin America.

Fusing bagpipe music from different cultures together -- such as from Galicia and Latin America -- is how Núñez modernizes the typically traditional sounds.

“It’s the Celtic music of the future,” the piper says. “It’s a fusion. It pulls everyone together.”

“The message we’d like people to understand is this is not ancient music and traditions that should die out,” Thornton says. “These are things that should be continued and this is an invitation for other people to get involved, particularly through the music.”

In anticipation of his Colorado appearance this weekend, Núñez shared his track “The Raggle Taggle Gipsy” with CPR. The rock-infused take on this old folk tune features the piper performing with his entire band. Listen to the tune by clicking the audio player at the top of this story.