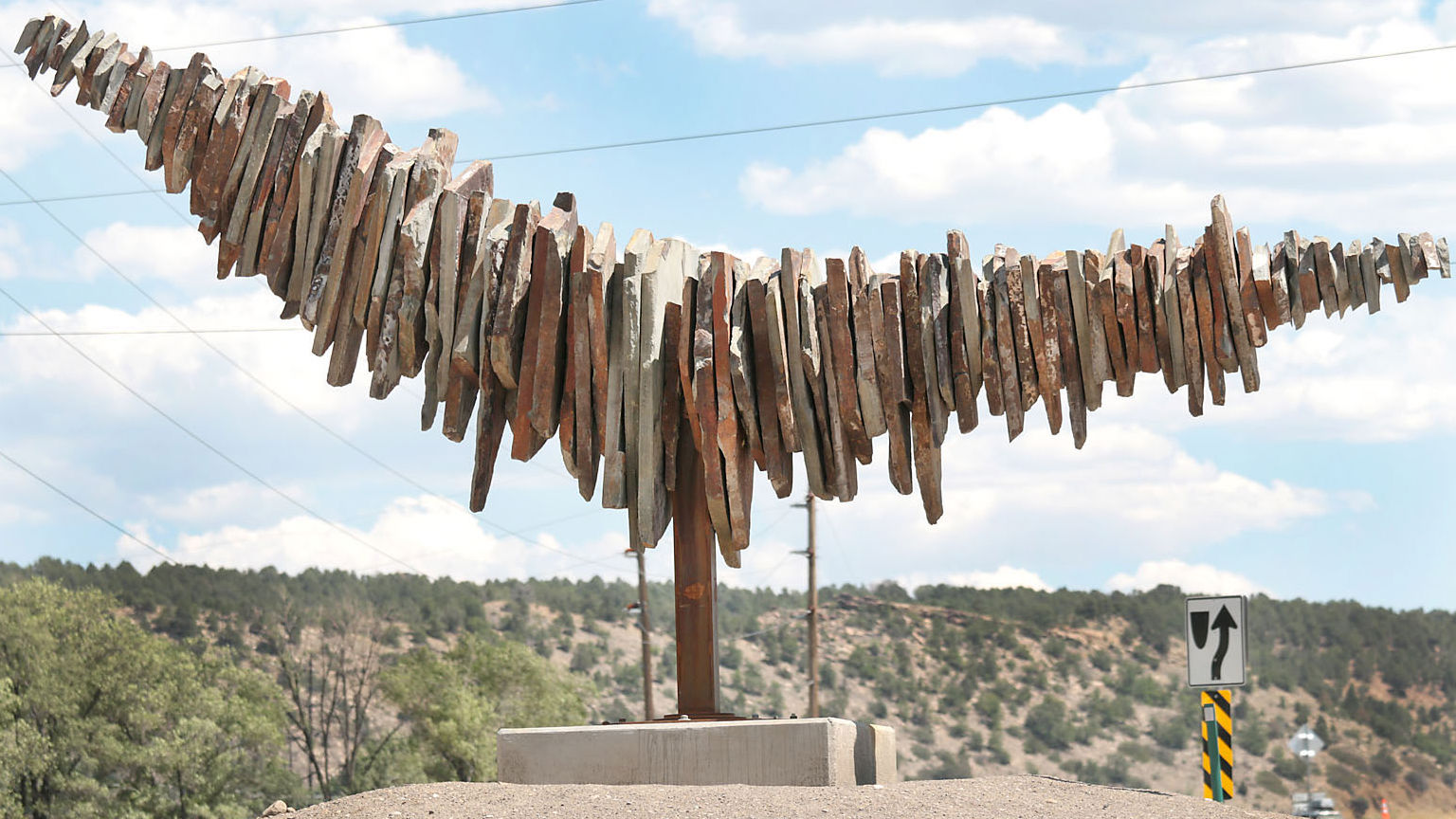 “Arc of History” is the latest addition to the city’s $1.2 million public art collection. The natural stone structure is designed by Pennsylvania artist Tom Holmes. Sitting atop a median at the intersection of Highways 550 and 160, it spans about 20 feet in length and resembles a fishtail in form.

Some locals are unhappy with how the artwork looks. They say they weren’t given enough input on the final design by the city and are complaining about its $28,000 price tag.

Recent articles in the Durango Herald have generated hundreds of reader comments, both for and against the sculpture.

Dugdale says the city involves the public from the beginning of the process and that community members are allowed to attend all public art commission meetings. They are also invited to an open house to view the designs, speak with the artists and rate the pieces on a scale from one to five.

But ultimately, a committee is responsible for the final selection, Dugdale says; the public does not get to vote.

“It’s not a popularity contest,” Dugdale says. “Art is truly subjective. I may love a piece that you hate and vice versa. Which is why we entrust the decision to the commission.”

Durango’s eight-member, city-appointed committee -- comprised of city officials, arts professionals and community members -- reviews public comments from the open house and then takes the public feedback into consideration when making the final decision.

The selection of public art is a contentious topic elsewhere in Colorado -- and beyond.

“Blue Mustang,” which towers over Peña Boulevard on the way to Denver International Airport, has drawn criticism since it was erected in 2008. Some critics want the 9,000-pound blue horse with glowing eyes removed.

“National Velvet,” a red fiberglass and resin sculpture by Colorado artist John McEnroe, perplexed many locals after its erection at the entrance of Denver’s Highlands Pedestrian Bridge in 2008. To some, the piece looks like a massive pile of crimson sausages, to others, it resembles an oozing brain.

As in Durango, a committee selected these pieces.

According to Denver’s public art program manager Michael Chavez, this policy has been in place since the program’s inception in 1988.

Chavez says Denver uses a panel of experts and a few community members to select public art because there is more to consider than just aesthetics.

“It has to be vetted for safety, maintenance and budget considerations, and the panel is selected for their expertise,” Chavez says. “You wouldn’t ask public opinion for how to build a bridge. You would go to a civil engineer or a construction contractor. So to put that solely in the hands of the public would be borderline irresponsible.”

Jack Becker, the executive director at Forecast Public Art in Saint Paul, Minnesota, is a national expert on the legislative processes around public art. He says it’s common for a committee to select the final artwork.

Becker adds that the public’s opinion can also change over time, further complicating the process.

“Time is an interesting factor in consideration and evaluation of public art,” Becker says. “Some of the greatest public art was very controversial when it was first introduced -- from the Eiffel Tower to the Vietnam Veteran’s Memorial in Washington D.C., which now attracts more than 10,000 visitors a day.”

In the case of “National Velvet,” the Lower Highlands neighborhood is throwing a block party to celebrate the sculpture six years after its completion. On Aug. 28, the Big Red Street Fair will feature food, beverages and even a haiku competition inspired by the hulking, red artwork.

As the story in Durango unfolds, CPR arts editor Chloe Veltman talked with Becker about the best practices for the public art process. Here’s a preview of their discussion.

CPR: Why is it best for a committee to make a final decision on public art?

Jack Becker: It isn’t necessarily always best. I’ve seen projects done by a single curator, who selected the art on behalf of a community. And I’ve seen projects selected through some sort of Facebook popularity contest. There is a spectrum of possibilities for the artist selection. But the key thing is, there needs to be people involved in the selection who have expertise -- in terms of public art, in terms of conservation knowledge, in terms of safety issues, artistic expertise.

CPR: So if the city is going to engage the public at all, what is the best way to do it?

Jack Becker: There are many ways to engage communities in the process of public art -- from the creation of the program that eventually results in art for the community, to the design process and interpretive process.