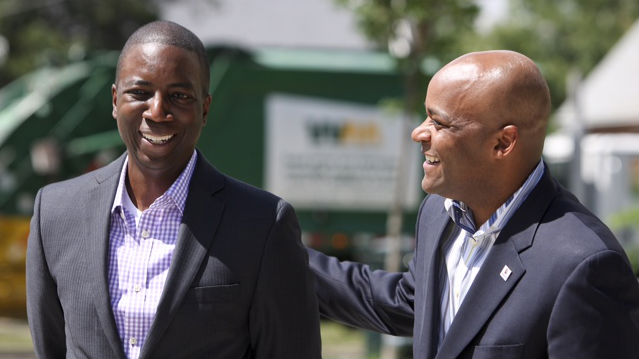 "P.S. You are Here" is a pilot, city-wide program intended to revitalize Denver neighborhoods.

Grants are distributed from a $40,000 pool to projects that use arts and culture to transform public spaces such as parks, sidewalks, medians and other underused gathering places into viable community areas.

Denver selected eight finalists out of 46 applications for the 2014 “P.S. You Are Here” grantees.

The mayor made the announcement at Madame C.J. Walker Park near the Whittier Alley Loop -- one of eight projects awarded a grant.

The grants ranged from $1,000 for Biz on the Boulevard at Jefferson Park, a locally owned business district in northwest Denver, to $7,800 awarded to the La Alma Lincoln Park Neighborhood Association near downtown.

​“From La Alma-Lincoln Park to Whittier and in neighborhoods across the city, these projects will create more livable communities for many Denver residents,” Hancock said during Monday’s conference. “Creativity on the street level helps take the everyday bricks and mortar of a city and turn them into places. By enlivening these places with art, we will help build stronger, more socially and economically viable communities.”

Denver Arts and Venues guidelines require projects to be in an outdoor space within city limits. Projects must also be highly visible, free to the public and on display for three months to one year.

Denver Arts and Venues deputy director Ginger White-Brunetti says these projects will help fulfill one of the key objectives listed in the “Imagine 2020” plan -- to integrate arts into residents’ daily lives.

“These first projects of the 'P.S. You Are Here' program give our neighborhoods new creative spaces in which people can gather and build even stronger connections with the neighborhoods and each other,” White-Brunetti says.

Last week, the city announced several other advancements in the ambitious plan.

Wednesday marks the first installment of the “Imagine 2020” speaker series. Launching the series is Peter Kageyama, an expert on the relationship between urban centers and creativity, and the author of “For the Love of Cities.”

Two other talkback events are scheduled for October, featuring topics such as using art to transform public spaces and how to engage youth with the arts.

Denver Arts and Venues is also investigating the possibility of establishing a creative business area in the city’s River North District. A research team from Artspace, a national arts advocacy organization based in Minneapolis, Minnesota, is analyzing the feasibility of that project, which would create affordable living and working spaces for artists.