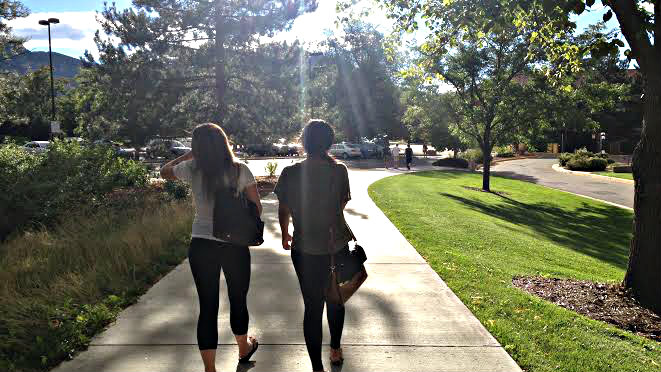 (Photo: CPR/Jenny Brundin)Paulina Perkaus and Grace Benninghoff have experienced a lot for 19- and 20-year-old college students.  Not all of it good.

They’ve had friends who’ve been raped on campus, friends who unknowingly ingested date rape drugs, and one of Perkaus' friends even tried to commit suicide after university officials in another state didn’t investigate the friend’s allegation of rape by a football player.

Both Perkaus and Benninghoff are transferring to the University of Colorado Boulder this year and hope the climate for women is better. (A transcript of their interview with CPR education reporter Jenny Brundin about the realities they faced at other colleges out of state is below.)

CU Boulder is taking on a number of initiatives to combat sexual violence on campus. That includes orientations that cover everything from how to intervene when someone is intoxicated to what sexual consent really means. CU and four other major Colorado universities are on a list of colleges nationwide being investigated by federal officials for Title IX procedural issues or complaints. Title IX is the law that sets rules for how schools must handle allegations of sexual assault and harassment.

Jenny Brundin: Paulina, is sexual assault on campus something you worry about?

Paulina Perkaus: Yes. It’s everywhere. I’ve had friends who’ve experienced it and with date rape drugs and putting things in drinks, you have to worry about holding your hand over your drink or you know, making sure it’s from a can that you opened yourself. So it’s a really huge problem. And I think the biggest part of it is I think people don’t understand what the laws of [sexual] consent are. And I think that’s a huge problem.

Paulina Perkaus: Yes, you know, this was a sign that she wanted it, whatever. Whatever it is, you can’t just guess. You have to clearly hear words of consent when someone isn’t intoxicated.

What about you Grace? Is sexual assault something you worry about?

Grace Benninghoff: Yeah, absolutely. I would say the same especially at bigger schools where everyone doesn’t know each other. If your friends leave [a party] and you are alone it’s kind of a scary situation because you’re there with people you don’t know. You just never know what’s going to happen especially if there are strangers around and it’s late.

Paulina Perkaus: It’s something you wouldn’t know [the potential for sexual assault] unless you’ve seen it.  Some of the nicest, most unassuming people can end up raping or sexually assaulting people.

You’ve obviously been to parties where you see this happening. So tell me what does that look like, everybody’s drinking and getting intoxicated ... and then what do you do?

Paulina Perkaus: You have to make an effort to go out with good friends that are watching out for you and have your best interests at heart.  You have to stay with them the whole night and if you see one of your friends going off to a room or going upstairs, you just check in with them really quick, see how they’re doing. If they’re not OK,  just be like, ‘OK, let’s go home.’”

Grace Benninghoff: You can tell if they are too drunk.

Paulina Perkaus: Then you know that that [sex] is not going to be a good thing for them to do.

So you will lead them away but what is the guy saying?

Paulina Perkaus: Doesn’t really matter to me if he gets upset -- then so be it. Usually they understand to be honest and they appreciate that we could see something that they didn’t, that the person was too drunk to be able to do whatever [give consent].

Paulina Perkaus: Definitely. You have to pay attention to that. Just check in with yourself and your friends emotionally, and if there are certain people you are trying to avoid at a party or whatever it is, you have to be conscious of that going into the situation.

Where did you guys get this knowledge? Grace?

Grace Benninghoff: I think it’s just experience.  Just because you have so many experiences that are close calls or where somebody is trying to take advantage of somebody else and you just have to be really careful. The school I was at before it was a huge issue. The entire atmosphere was really, I don’t know if I want to say sexist, but it’s just that it was the feeling -- like getting into frats [fraternity parties], they’d ask girls to turn around so they could look at their butts, and stuff like that, and they’d say, ‘Oh, you can come in, oh you can’t come in.’ It was like they had more power or something so they feel entitled sometimes. So I think that’s a culture that’s unfortunate and not OK but you have to be careful.

Paulina Perkaus: Guys, too, they’re so obsessed with getting girls, getting laid. It’s like, not all guys are like that. Some of them actually enjoy having girlfriends or don’t feel comfortable going as far as others and it’s just this huge competition to some of them, like if you do this [sleep with girls] you’re cool and a lot of guys need to understand, you don’t have to do that.

Describe one of those close calls for you personally Paulina or for a friend of yours.

Paulina Perkaus: I feel very strongly about this issue. And it’s been an issue for me and for multiple friends. One of my friends actually tried to take her life following an incident [rape] and she took it to the police and tried to have something done about it, was very proactive and brave about it and they [university officials] hired one of the best defense attorneys in the state because it was a football player at a big-time university and it was a big deal for them. But – that was absolutely atrocious that they basically didn’t investigate it and were just trying to protect this criminal.

So they swept it under the rug?

Paulina Perkaus: Yes, and it always is. That’s why so many people don’t report it at all because if something is done about it legally, they [the victims] are criticized and a lot of it is with an acquaintance, usually not a stranger, and that just makes it so much more uncomfortable but I think that the biggest thing is the laws of consent because even discussing this with some of my friends, like some guys are saying, ‘oh well you know, that wasn’t really what that was right?’ And if you have to even question it, in my mind, it’s wrong. That also depends on the person but I think that there are a lot of grey areas and that [the laws of sexual consent] just need to be clearly stated over and over again at all [campus] orientations.

What did you guys think of the orientation on this subject?

Grace Benninghoff: I thought it did a pretty good job of covering everything at a basic level, but I do think it’s not going to fix it. But it’s a good first step to make sure they’re covering all that stuff and that they’re making sure that people are at least a little bit more aware of it at least,  going over the rules of consent I think is important, because that’s something, like Paulina said, it’s misunderstood a lot.

Why don’t you think it’s going to be fixed?

Grace Benninghoff:: There has to be a major shift in not just understanding this [sexual assault on campus], but in culture, just in the entire culture of [sexism] … it’s a huge cultural thing that has to shift over time, and it’s going to take a while and this is a great step in the right direction but it’s just about equality and men and women being viewed equally, not men having more power or having a right to something they don’t have a right to.

On Oct. 7 and 8, Breaking Silence's Interactive Exhibit will be on CU Boulder's campus. The interactive exhibit,  Stories of Survival, seeks to spread awareness and understanding into interpersonal violence. People who walk through the exhibit can hear survivor's first-hand accounts as they guide participants through the recreated environments of their abuse, the struggles they have faced, and their continued journey toward healing.