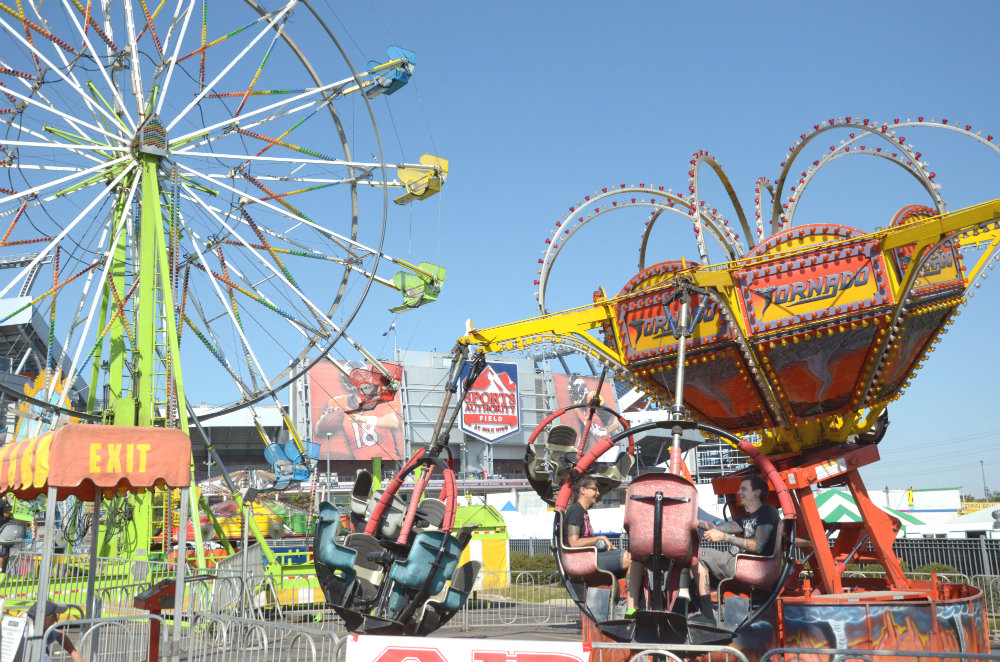 (photo: CPR / Kegan Warner)After an embattled stint at May Farms in Byers, Colo., Riot Fest finally arrived on the last weekend of summer at its new location at Sports Authority Field at Mile High in Denver.

Denver was the third and final stop of the traveling music festival and carnival following weekends in Toronto and Chicago. For its second year in Colorado, Riot Fest expanded from two days to three, and from three stages to four.

Friday afternoon introduced attendees to The Orwells, who can claim fellow rock ‘n’ roll saviors Arctic Monkeys among their fans: the British group selected them as tourmates earlier this year. Chugging through songs from “Disgraceland,” the Chicago-area garage band were among the few up-and-comers on the festival’s bill.

Veteran groups were indeed the primary draw for the three-day event. Looking through the crowd, one would always find the number of The Cure and Social Distortion t-shirts far outnumbered those for City & Colour or The National.

Buzzcocks were almost certainly the eldest act of the weekend. Their presence was welcome not only because singer Pete Shelley’s voice hasn’t seemed to age much despite pushing 60, but also since they’re the pop-punk godfathers of Riot Fest acts nearly half their age, e.g. Taking Back Sunday, New Found Glory, and Weezer.

The latter headlined Friday night with an extensive "time machine" trip through its back catalog, including a full rendition of 1994 debut “The Blue Album.”

Most of Day One’s momentum, however, was commandeered by earlier acts like South African rap group Die Antwoord and go-to summer festival headliners The Flaming Lips. Kudos to the latter for continuing to defy expectations for audiences: as one who has witnessed their show many times, the psychedelic Oklahomans still surprised with elements like a giant expletive-reading balloon and a cover of “Lucy in the Sky with Diamonds.”

Saturday proved to be a crash course on emo and hardcore, with fans young and old gathering for Social Distortion and The Descendants.

But none could rival the melancholy pull of top-billers The Cure. Through a career-spanning two-and-a-half hour set, Robert Smith and company seemed the biggest draw of the weekend.

Opener “Plainsong” was met with rapturous cheers by those patiently guarding a spot close the May Farms stage, named for the Byers, Colo., spot from which the event was ultimately dismissed. Despite the prodigious numbers of the crowd, the nature of the English post-punk group’s music isn’t exactly conducive to movement -- save for lively numbers “In Between Days” and “Fascination Street.”

Dum Dum Girls may have taken a page from The Cure with goth-inspired new album “Too True.” The Los Angeles indie band's too-short set actually went a little longer than scheduled, so the tender closing moments of “Coming Down” were interrupted by funk-metal group Clutch starting a stage away.

Sunday gave early birds a taste of Colorado music with In the Whale and The Epilogues, both of whom were an easy fit amongst the punk rockers with a knack for melody.

Among those hardcore heroes was Bob Mould, whose recent “Beauty & Ruin” album is loaded with pop sensibility. The tunes from that album sat amicably next to classic Hüsker Dü tracks “Celebrated Summer” and “Chartered Trips” in a live setting.

Expected rain showers finally kicked in that night during Dropkick Murphys’ celtic punk show, and continued relentlessly through the evening.

That weather ended up decimating the crowd for Day Three standouts TV on the Radio, though singer Tunde Adebimpe remained jovial throughout. The Brooklyn art-rockers gave waterlogged spectators a preview of intricate mid-tempo songs from upcoming album “Seeds.”

Just a few days past the one-year anniversary of a headlining Red Rocks performance, The National returned to Colorado to wrap up Riot Fest 2014. However, the closing spotlight had to be shared with alternative hip-hop veterans Wu-Tang Clan. Both maintained a determined crowd in attendance despite a soggy trek to the parking lot and an imminent Monday morning awaiting them, though the former reportedly faced a number of sound issues later in their set.

Take a look through our Riot Fest 2014 photo gallery below: