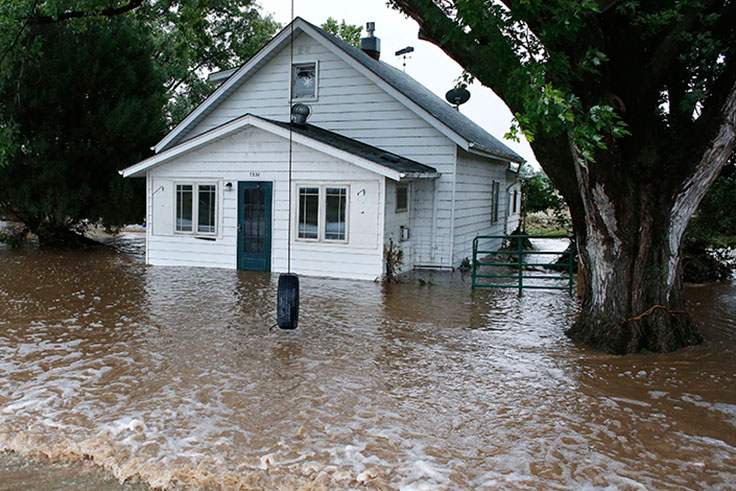 (AP Photo/Brennan Linsley)Last year's devastating floods in northern Colorado were not made more intense or more likely by the effects of climate change, a new study says.

"There’s clear evidence that overall, our greenhouse gas emissions are making the planet warmer and moister, but we found such climate factors had little appreciable effect on the frequency of heavy 5-day rainfall events in this area during September," said the report's lead author, Martin Hoerling, a research meteorologist at the National Oceanic and Atmospheric Administration’s Earth System Research Laboratory in Boulder, Colo.

The study notes that a similar rain storm fell over the northern Front Range in 1938 -- "long before appreciable climate change."

The study analyzed climate simulations from 1871 to 2013. A press release from the Cooperative Institute for Research in Environmental Sciences, a partnership between CU-Boulder and NOAA, characterized the study's model in this way:

To tease out the impact of climate change on the 2013 floods, Hoerling and his colleagues used a climate model, developed by NASA, that contained detailed information on how various climate factors—such as greenhouse gas levels, ocean temperatures, and sea ice extent—have varied since the late 19th Century. Run many times, the model produced occasional heavy September rain events both at the end of the 19th Century (1870-1900) and in a recent 30-year period (1983-2012). Comparing those two time periods, the researchers found that the extra greenhouse gases, warmer oceans and lower amounts of sea ice of recent decades did not increase the likelihood of rains as heavy as those in September 2013.

Hoerling said the heavy rainfall can be attributed to a slow-moving low pressure weather system that hung over the Front Range for days.