Updated on Oct. 16, 2014: The video has been taken down due to a copyright claim, but read on for our commentary.

The Piano Guys are a 21st century group with four members. Pianist Jon Schmidt and cellist Steven Sharp Nelson are out front but, just as importantly, producer and writer Al van der Beek and videographer Paul Anderson work behind the scenes.

A few years ago the group established a reputation for over-the-top classical and crossover YouTube videos. Several of them have over 20 million views.

They don’t take themselves too seriously. In concert they’re known as much for their comedy as for their music. 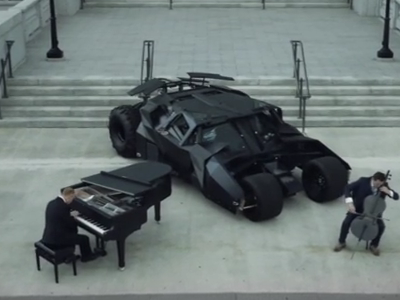 (Photo: YouTube)This music for piano and cello (the two instruments alone were used to make every sound in the recording) celebrates 50 years of Batman, starting with the '60s TV show and continuing through Tim Burton's and Christopher Nolan’s takes on the Caped Crusader.