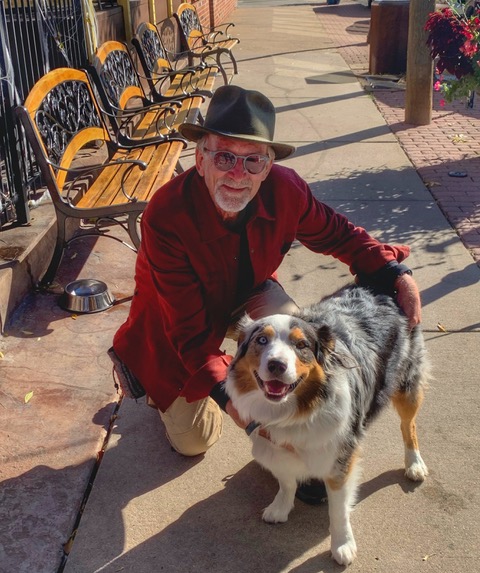 Since Retirement from CPR Classical
Since retiring as the CPR morning show host in 2017, I’ve quit getting up at 2am, took a bucket list solo bicycle ride from the west coast to Montana, hiked the coast of Wales with my wife, spent hours every day walking with our Australian Shepherd Woodrow as well as taking more naps than I ever thought possible. But my main focus remains reading great books and listening to classical music. In fact my love of the music has grown even stronger these last few years thanks in large part to CPR classical’s great programming. I miss my friends at Colorado Public Radio but remain a supporter and a superfan.

Education:
The usual places. Mom. Dad. Midwestern public schools. A couple of universities, a broadcast school, countless libraries, bookstores and most importantly, a lifelong interest in learning about and listening to music.

Professional background:
Richard’s journey to Colorado Public Radio is an interesting one. He got his start in radio in 1972 at a CBS affiliate in Missoula and after a stop over in Albuquerque, he arrived in Colorado just in time to join the team putting Boulder’s KBCO on the air in 1977. After 16 years as the mid-day DJ and Sunday night jazz show host, he accepted an entirely different challenge. In 1993 he became the program director of a children’s radio station in Denver, (Kid Radio), followed by a couple of years as the production director at 96.5 The Peak.

Why I got into radio:
I grew up in a small town in northern Iowa and fell in love with radio listening to my little transistor picking up AM stations late at night from far away places like Chicago and Oklahoma City. Story telling and music are still magic to me. Radio is indeed the most visual medium.

How I ended up at CPR:
I’ve been listening to Colorado Public Radio since the early 1980s. In 1998 I had a chance to join the Classical Public Radio Network while it was still in its formative period. In July 2008 I was offered the opportunity to host an afternoon music program. I love the music, the audience, and the mission of Colorado Public Radio. As Mister Gershwin said in his song, “Who could ask for anything more?”