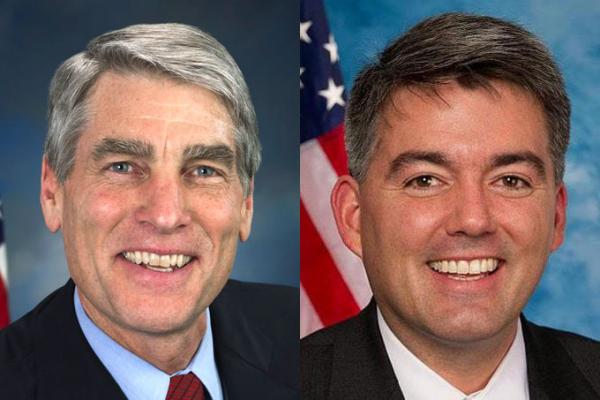 Democratic Senator Mark Udall and Republican Congressman Cory Gardner had a spirited debate Tuesday night hosted by The Denver Post. Both candidates are locked in a tight race and both stayed on message in the hour-long debate.

Udall attacked Gardner as extreme and out of touch, Gardner criticized Udall for being in lockstep with President Barack Obama.

One of the common themes of this election, the topic of women's reproductive rights, came up several times. Gardner was asked to explain his positions on IUDs and the morning after pill.

"The fact is I support over the counter contraception made available without a prescription," said Gardner. "When it comes to the other issues, those are legal and nothing is going to change that."

Gardner was also asked about his initial support for the personhood amendment. He no longer backs it but does support the federal Life at Conception Act.

"Senator Udall said a good faith change of position should be considered a virtue and not a vice. The federal act was simply a statement that I support life," said Gardner.

For his part Udall defended his decision to focus so much of his campaign on women's reproductive issues and said he hasn't gone too far with the all out ad blitz.

"Reproductive rights are important to millions of Coloradans," Udall said. "Colorado was the second state to grant the franchise to women."

Udall also defended his support for Obamacare and backing the president's policies.

"This race is between Congressman Gardner and me and our respective records. He continues to throw out the number 99 percent, I want to remind him he's running against me in this election," said Udall.

Senator Udall said he believes the U.S. will wipe out the Islamic State, and once again went after Gardner for tying him too close to Obama.

"He talks about this number 99 percent, well he has been 99 percent with the Republican leadership in the House," said Udall. "His extreme record on everything from women's reproductive health, to supporting minimum wage workers, to climate change. 100 percent of Coloradans know he's in the wrong place."

"We rode in a helicopter and we were unified, and we had back to D.C. but when you got off that plane you took a whole different approach," said Udall. "You voted to shut down the government. That's the fact. You delayed the recovery."

Gardner argued that Udall is trying to politicize a tragic occurrence.

"I sat in your office to work on the legislation you're bragging about. We worked together to find solutions," said Gardner. "The Vice President of the United States was in Greeley, Colorado and he said even if there was a government shutdown flood relief would not be impacted. We asked the Vice President about that."

The two candidates are debating a total of three times in just a week's span. Their first debate was at the Denver Metro Chamber of Commerce and moderated by Politico. The Denver Post debate was their second. Their final debate of the week will be in Pueblo and sponsored by the Pueblo Chieftain.

Polls show the race is a statistical dead heat.