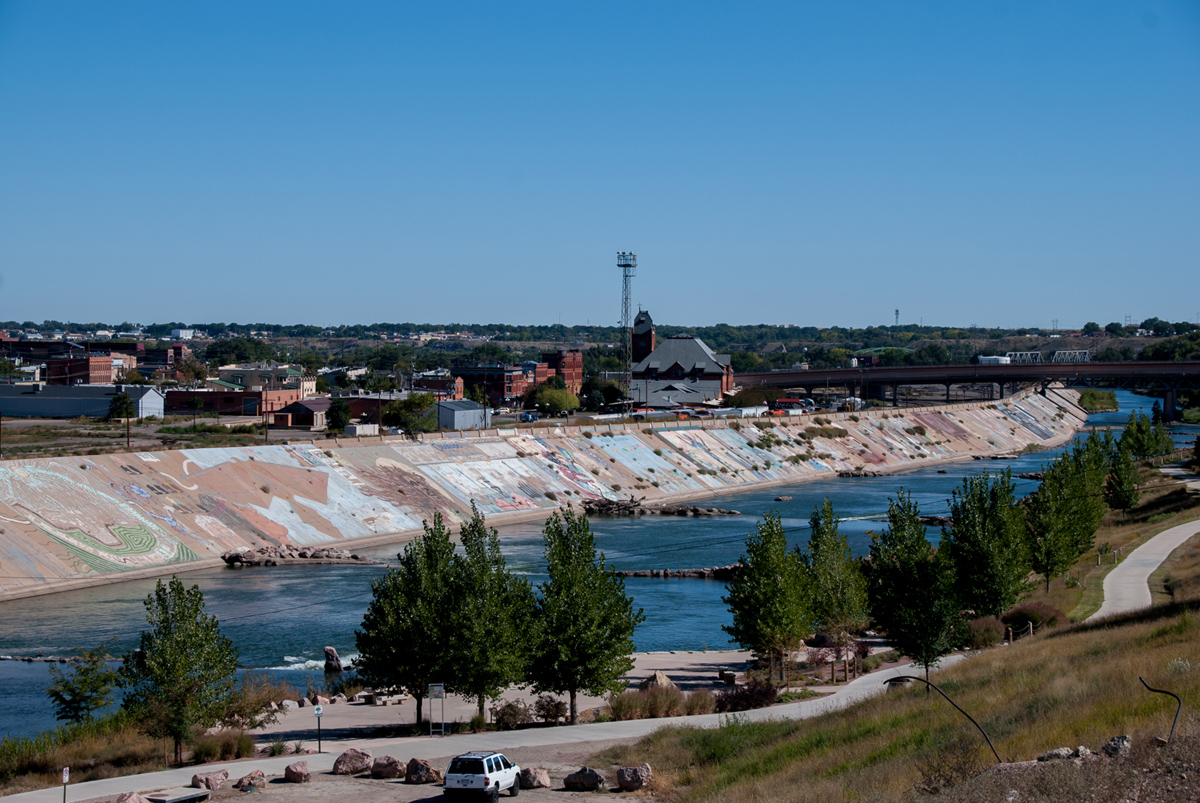 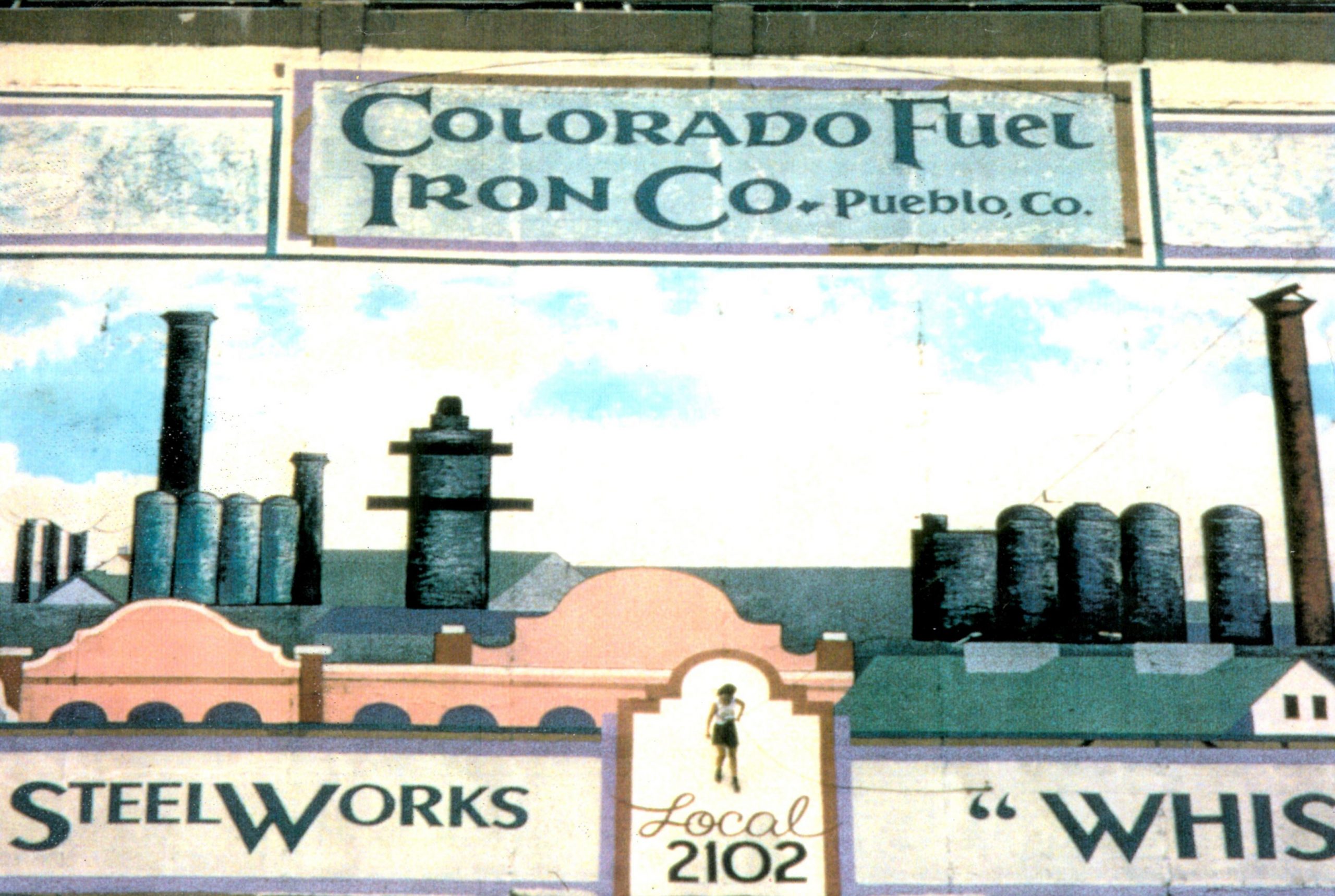 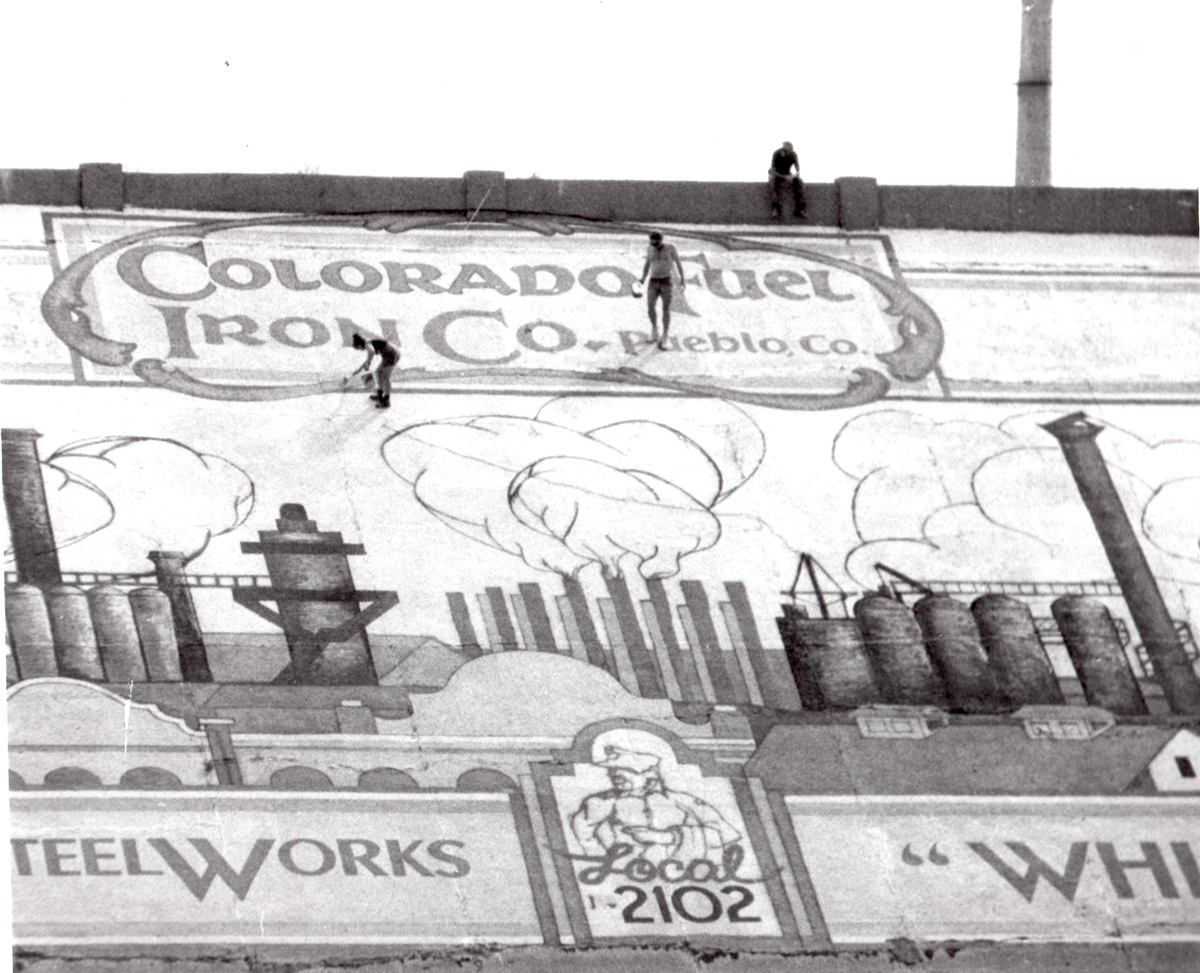 Courtesy: Cynthia Ramu / Pueblo Levee Mural Project A crew works on the CF & I portion of the mural 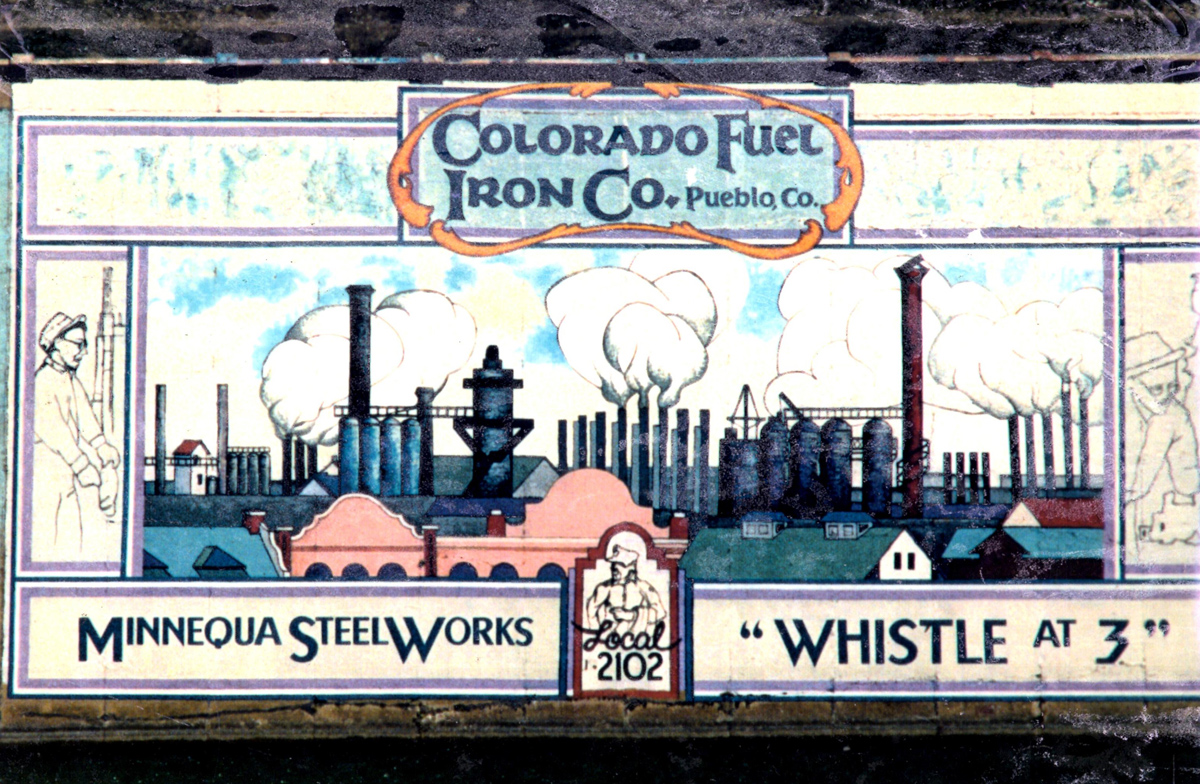 The mural that covers most of the 2.8 mile long Arkansas River levee in Pueblo is facing its demise. Hundreds of huge images painted over the last forty years by at least a thousand artists combine to make this artwork. It’s so massive, it’s listed by Guinness World Records as the largest outdoor mural on the planet. But it’ll be destroyed during the forthcoming repair project.

Walking along the Arkansas River is a colorful and surprising trip into the heart and soul of Pueblo, especially with Cynthia Ramu, volunteer coordinator for the Pueblo Levee Mural for the last 22 years.

“A bunch of college students did their mock Andy Warhol of Andy Warhol.  Right next to that is a giant thunderbird; see that Native American looking up at the thunderbird, and then the Hispanic man to the side?  See the purple flowers?” Ramu says, pointing out different murals by different artists.

Ramu painted dozens of murals on the levee herself, including a 120-foot long homage to steelworkers at the former Colorado Fuel and Iron Steel Mill here in Pueblo. She says she loves the mural so much that it’s the reason she moved to Pueblo decades ago. The news of the impending demise of the record-breaking artwork shocked her.

“I was like ‘really?’” Ramu says, emotion in her voice. “Of all the things in the world that would change or be different…. I couldn’t fathom, I just couldn’t perceive that they would do that. But I understand. It’s a big change for me, and for Pueblo.

Ramu says she understands the reasons for the repairs though and says she wants to turn the loss of the existing mural into something positive. She’s already talking to photographers about documenting it, and taking ideas about other ways to preserve its legacy.

Susan Fries leads the Pueblo Arts Alliance. She says she’s looking forward to working with Ramu and others in the arts community to determine the future of the levee mural project and its connection to the city’s creative corridor.

“It’s an opportunity for us,” Fries says.  “So if planning is done wisely and we all have a voice, we think that it could be a great advantage to the work we’re doing.”

Repair plans for the levee include tearing off the old concrete and replacing it. So there will be a new canvas for artists.

Pueblo muralist Mathew Taylor grew up being inspired by the levee mural and painted on it as a kid. He says he’s sorry to see it go too, but he sees murals as temporary.

“They fade, they’re outside, they’re going to go away,” says Taylor, who’s looking forward to painting on the new levee.  “They’re meant to have a lifespan.”

The arts rank high on the list of things that the Greater Pueblo Chamber of Commerce promotes about Pueblo, says Rod Slyhoff, President & CEO of the Chamber.

“I think that the levee and the murals just add to that whole persona of us being an art community,” says Slyhoff, adding that he hopes new murals go up quickly on the levee when the time comes.

Slyhoff says most tourists don’t come specifically to see the levee, but once they discover it they like it.

Sally Carey of Denver says the mural is an intriguing backdrop to the Pueblo Whitewater Park and bike path along the river.

Many locals have a fondness for the mural too. Retired construction worker Jim Moreno has lived in Pueblo for decades. He says he likes looking at the mural while he fishes in the river or walks along the bike path with friends.

“I bring people down here,” says Moreno.  “Some people out of Rocky Ford couldn’t believe they painted all that. I hope they save what they can and if they pour new concrete I hope they repaint it—it would be nice to have it down here.”

Ramu, then, still has plenty of work in her role as levee mural coordinator. She says even with the coming destruction of it, the mural has been and will be a good thing for Pueblo.

“It brings us all back out here, it brings people together, it creates community.  It’s going to be interesting to see how this changes. I can’t imagine a clean canvas.”

Only a few of the murals will be affected by phase one of the project, which is slated to begin in November and last till the spring. The entire project is expected to take a total of three to four years.