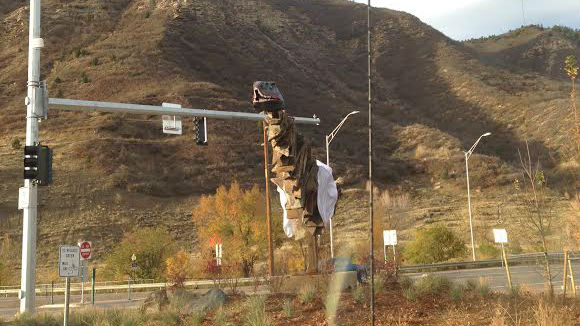 (Photo: Courtesy of Sherri Dugdale/City of Durango)An expertly crafted dinosaur head that mysteriously appeared atop a controversial piece of public art in Durango on Halloween and then disappeared Monday is now in police custody.

Lt. Ray Shupe of the Durango Police Department says his department received an anonymous call on Monday shortly after 4:30 p.m. The caller said that the prehistoric head placed on top of “Arc of History,” a 20-foot-long stone sculpture resembling a fishtail located at the intersection of Highway 550 and 160 in Durango, had vanished.

Thursday, the teens returned the head to police, claiming they didn’t realize taking it was a crime until they saw the story appear in the Durango Herald.

“They said they thought it was a funny prank,” Shupe tells the Herald.

Shupe also says police have no intention of pressing criminal charges against the teens, whom he did not identify.

This is not the first time a piece of art in the city’s collection has been “creatively enhanced,” assistant to the Durango city manager Sherri Dugdale says.

Two bronze art works -- “Puck,” a rendering of the famous character from Shakespeare’s “A Midsummer Night’s Dream,” located across the street from Steamworks Brewing Company, and “Mudra,” a figure of a dancer in the center of town -- have both frequently been seen wearing knitted leg warmers and mittens. 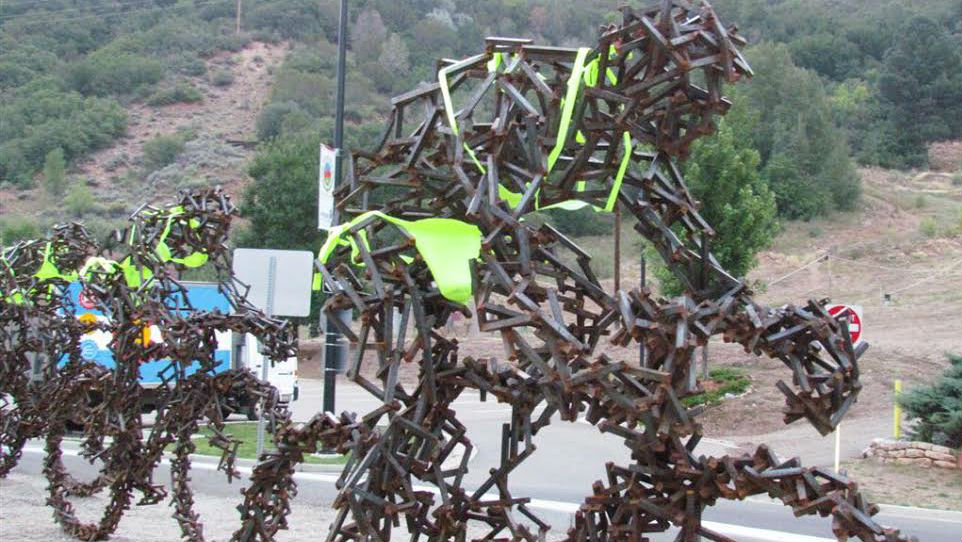 (Photo: Courtesy of Sherri Dugdale/City of Durango)Dugdale says that “Endurance,” a sculpture featuring five bronze cyclists that was installed in 2012 for the U.S. Pro Challenge, often receives added adornments such as holiday decorations and even bikinis.

According to Dugdale, the city’s Public Art Commission embraces these acts, as long as they aren’t detrimental or disrespectful to the art.

“As long as the artwork isn’t damaged or defaced, it provides some whimsy and a way for the community to interact and have a sense of humor about the sculptures,” Dugdale says. “I think it’s a good thing.”

Residents have been divided over “Arc of History’s” aesthetics after the city installed the imposing sculpture at the busy intersection in August.

Articles in the Durango Herald generated hundreds of reader comments, both in support of and opposition to the artwork.

Many residents say the dinosaur head was an improvement to the controversial piece -- the sculpture temporarily picked up the nickname “Jurassic Arc.”

Despite the public approval of its new look, Dugdale says the city has no intention of adding the dinosaur head back to “Arc of History.”

“At the end of the day, it is a serious piece of public art,” Dugdale says. “That’s not how the artist intended it and that’s not how it was approved into the collection. The whimsy is intended to be a temporary thing.”

However, the dinosaur head’s creator -- who remains unidentified -- put a lot of effort into the addition.

“That’s kind of another part of this,” Dugdale says. “It was at the correct scale to the piece and it was pretty realistic looking from what I saw from the photographs.”

The head’s fate is otherwise undetermined.

But the prank has inspired the city of Durango to start exploring ways to foster the public’s interaction with municipal art more deeply.

Dugdale says the Public Art Commission is exploring the idea of running a contest in 2015 around the city’s public art.

“There has been a suggestion that we do a contest to see what’s the most creative thing you can do with the different artwork in town,” Dugdale says.