Dozens of schools around metro Denver recently gave a provocative and uncomfortable assignment to their students: Watch a documentary film called, “I’m Not Racist, Am I?” It chronicles a year in the lives of 12 high school students from New York City, talking about race and privilege.

Students in Tom Thorpe’s English class at Colorado Academy were among them, as they took on the issue of race this semester. Their class coincided with the film’s release and an exhibit at the History Colorado Center, “Race: Are We So Different?”

As an exercise, Thorpe asked his students to write questions they would ask each of the documentary's characters. He was nervous for what the discussion might bring afterwards, knowing the topic can be uncomfortable and emotional.

"I thought half of me should be black, the other half is white."

In the film, a girl named Abby is conflicted about her identity and not always pleased with how she looks. She's biracial, with a white mother and a black father, and wonders why her father never talked to her about race.

One group of students said they’d ask Abby what she thought about one white girl in the film who called biracial people “halfies.” They also wondered what Abby thought about the way her parents never broached the subject. 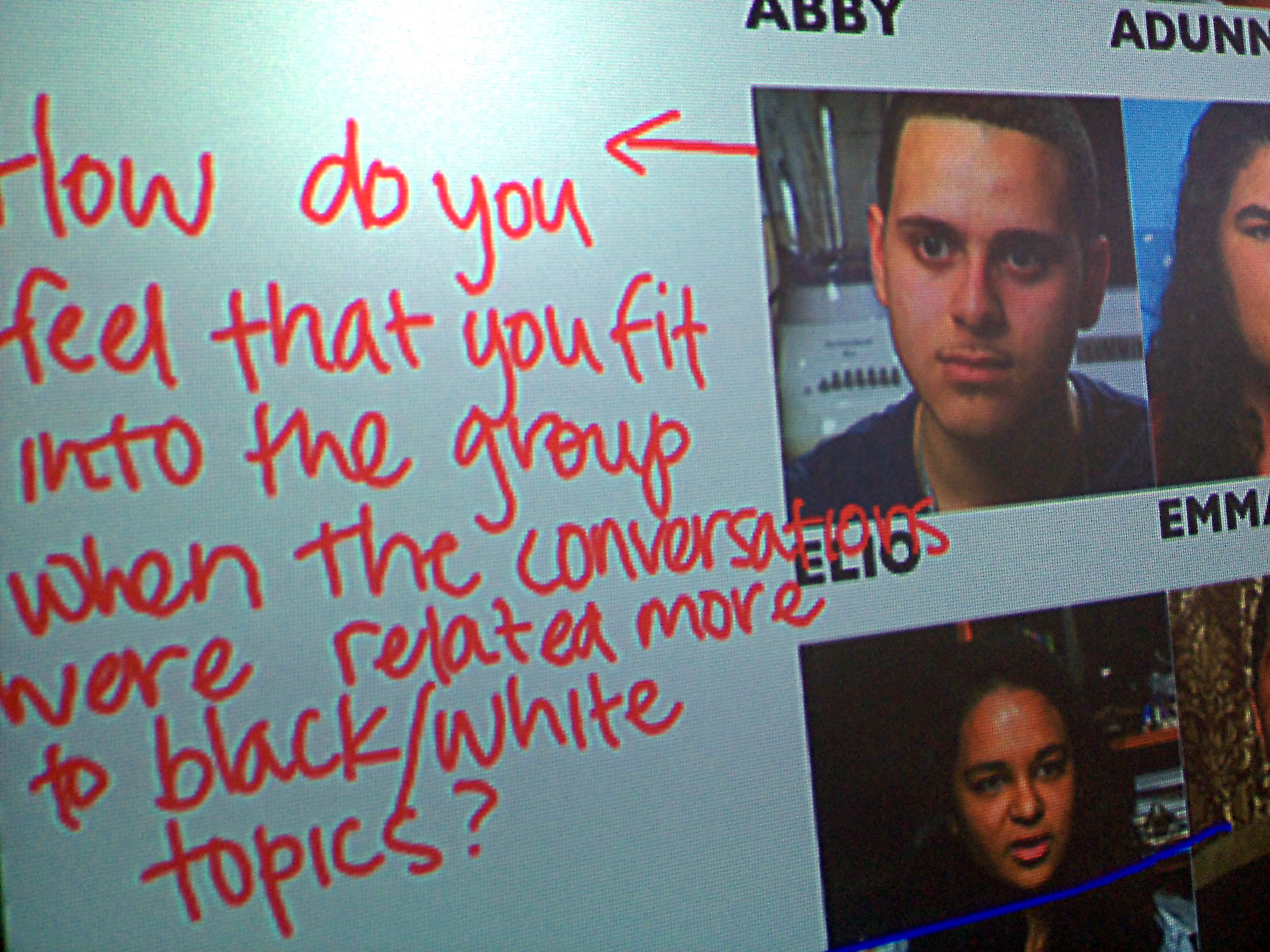 (Photo: CPR/Jenny Brundin)Thorpe, on the other hand, asked the class why they thought Abby's parents didn’t talk about race with their children.

Student April Edwards said she could completely relate with Abby because her white mother and black father did the same thing.

“My dad [who is] black doesn’t talk about race for the same reasons that her dad doesn’t -- because he doesn’t want me and my brother to think about it, to make it a problem, to have to think 'oh we’re different,'” Edwards told the class.

“He never brought it up," she said. "But as it did with Abby, it caused a lot of confusion for me because I didn’t know what it meant to be half black. I literally thought when I looked at myself in the mirror, I literally thought half of me should be black and the other half is white.”

Edwards told the class that when she was 6 years old, she stabbed herself in the arm to see if there was a darker layer of skin underneath.

(Photo: CPR/Jenny Brundin)In the film, when Abby’s black father tells his biracial daughter that race never came up for him, April said that he has to be lying.

“I thought, there’s no way that can be true,” she said.

The students talked about how the film shows Abby’s father was an executive at the investment firm Goldman Sachs, and so maybe he suppressed his race just to get by. That made April draw a parallel with the “Uncle Tom” persona that Malcolm X once described as a black person who behaves subserviently to white people, or acts "white."

Thorpe prompted Edwards to “unpack” that image and explain what she meant.

“He was a black man who managed to succeed in a world where black men don’t normally succeed, and with that being said, I am sure he has felt times where he didn’t want to talk about his race because in that world, that’s not something he should bring up… because he didn’t want to lose any of his status,” Edwards said.

Are all white people racist?

he is saying that all white people are racist. "Yes," he says.

The facilitator defines someone who is prejudiced as a bigot. Not all white people are bigots. The definition of racism -- one adopted by many race scholars -- is this: Race and prejudice plus power equals racism. It’s the notion that the policies, the laws, the educational system all lead to systematic racism that privileges white people.

The response is a difficult one for some of the characters in the film, as it was for some students in Thorpe’s class.

“That is a racist remark,” said student Slater Shoptaugh, who said he found it offensive. He said the film also didn’t touch on the racism that exists between minority groups.

Thorpe noted the facilitator’s definition of racism is just one definition. He reminded them that the moment in the film where the subject comes up was just one example in the students’ year-long journey exploring race.

But another student jumps in, explaining the definition is “more about the power that most white people have and that’s what makes our race different from other ones is that historically, and even now, white people are the majority in power and I think they’re just trying to bring awareness to that.”

As the class drew to a close, there was a moment when one student, Grant Sapkin, spoke up and offered to crystallize what was going on.

“The purpose [of the film] was to change the thinking of students that participated in the film," Sapkin said. "Even though throughout they had discussion and disagreed with each other, that was the purpose of it all, to open up and feel uncomfortable and to talk about what they are disagreeing and agreeing about."

That’s what these Colorado Academy students have started to do.

“The fact that you all come in here with some raw emotions and some raw feeling and that you’re leaving with some discomfort and some unanswered questions is extremely healthy and extremely powerful,” Thorpe told them. 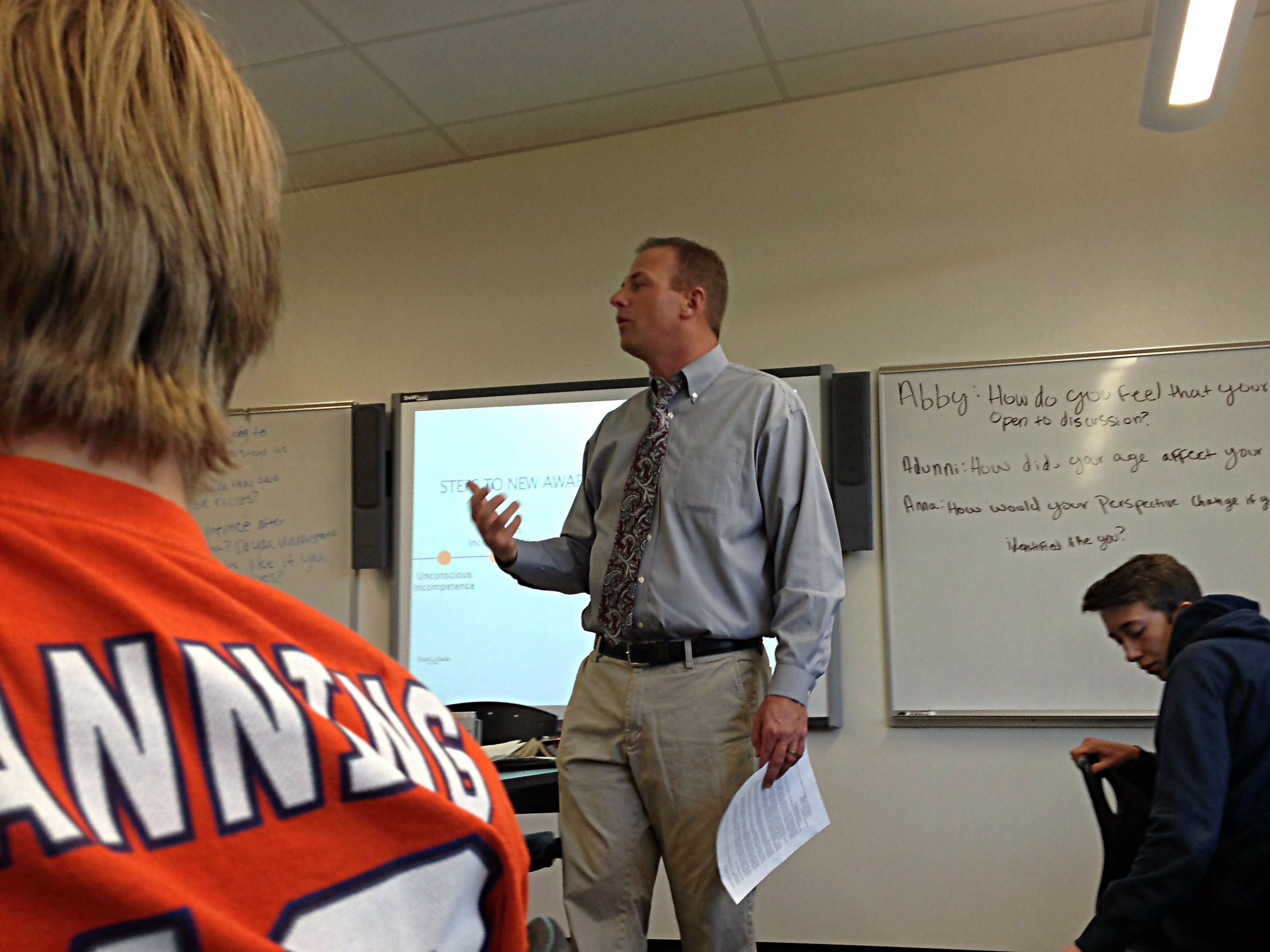 (Photo: CPR/Jenny Brundin)After the class, Thorpe said he hoped his students understood that they have time to work through these issues, that this was just one step, one moment, in grappling with race.

“As a 38-year-old man, I grew up in Oklahoma City, in a very racist, very racially divided world,” he said. “I’m also learning more and more. This film was a piece of it. Teaching Malcolm X, To Kill a Mockingbird, all these different novels I’ve done as a teacher, I’m constantly learning about it as well. And I hope that they can be OK with that.”