This weekend, people from across the country will converge on the Sand Creek Massacre National Historic Site to remember a dark moment in the state's history: November 29, 1864.

That early November morning, about 675 U.S. volunteer soldiers attacked an encampment of Cheyenne and Arapahoe as they slept in present-day Kiowa County. Approximately 200 of them, mostly women and children, were brutally slaughtered.

For visitors, the site's Chief of Interpretation Shawn Gillette said it is a powerful experience. 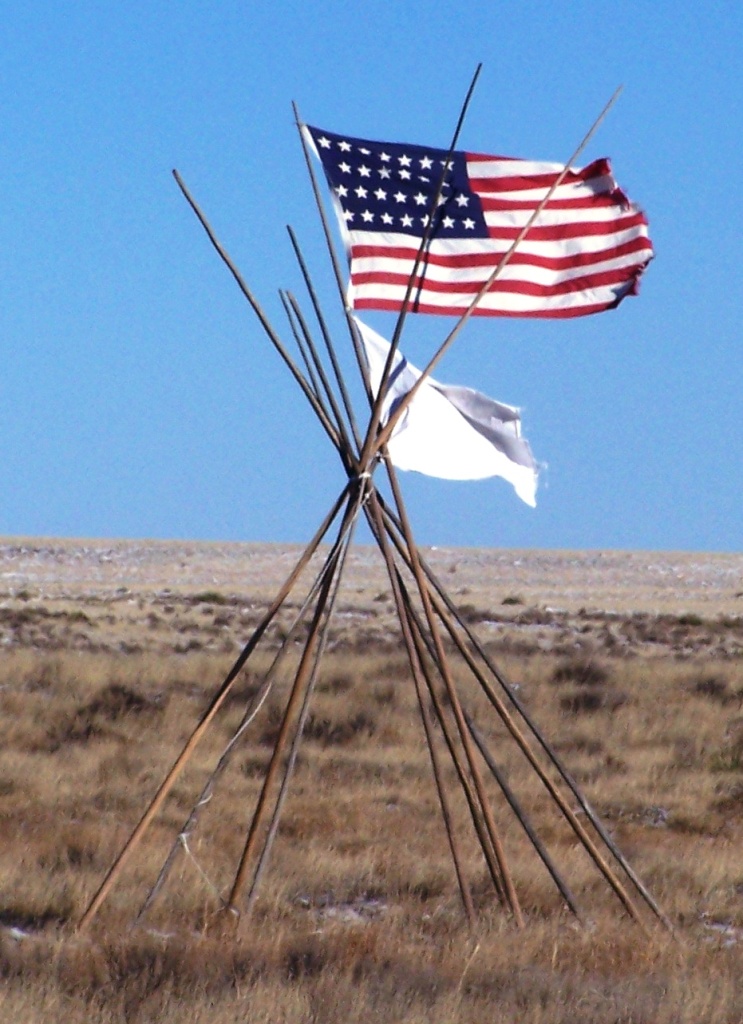 Photo: National Park Service"They’re kind of shocked when they learn the story of Sand Creek. How could a nation do this to its own people?" he said. "And then they come away feeling, 'But our nation acknowledges it,'" Gillette said.

This weekend, the Colorado Sand Creek Massacre Commemoration Commission has planned a series of events marking the anniversary, including a four-day healing run to Denver from the site.

Here are links to some of our coverage concerning the legacy of the massacre, from the declaration of an historic site, to posthumous declarations of guilt.

Three tribes, the state, the National Parks Service and Congress all agreed to declare the location of the massacre a National Historic Site in 2010.

Steve Brady represented the Northern Cheyenne tribe, whose ancestors survived the event, called the decision a major milestone in the legal relationship of his people with the U.S. government.

Brady and site superintendent Alexa Roberts agreed that the consensus required to create the site was an achievement. Read more.

February 2013: How historians named and found the site of the massacre

Historian Ari Kelman told Colorado Matters in 2013 that there were three federal inquiries into the violence at Sand Creek and all three found that the events were a massacre.

Alexa Roberts, manager of the Sand Creek site, told Kelman that it was first unit of the National Parks Service to label the actions of federal soldiers as a massacre. Read more.

Descendants of the victims of the Sand Creek Massacre filed a class-action lawsuit against the federal government in 2013 for promised reparations that never came.

Denver attorney David Askman explained that, to him, the case of his four Oklahoma plaintiffs is a "righteous" one.

"It's really amazing how immediate the carnage of Sand Creek is to them. They live with this every day," said Askman. Read more.

Chief Niwot of the Southern Arapaho died at Sand Creek, but he first encountered white people six years earlier when they asked for his permission to settle on Native American land in the Boulder Valley.

Niwot turned the settlers down, but let them stay through the winter. Settlers then broke their promise to leave, which also broke the Treaty of Fort Laramie that acknowledged the area was Indian land.

Curator Carol Taylor said some visitors were "sort of angry" that they had not learned Chief Niwot's story in school. Read more.

November 2014: DU finds its founder has 'significant level of culpability' in massacre

Over the course of a year, University of Denver professors, students and tribal representatives researched whether the school's founder, John Evans, should be considered at all responsible for the events at Sand Creek.

At the time of the massacre, Evans was Superintendent of Indian Affairs for the then-territory of Colorado.

The group found in its final report that Evans had a pattern of "neglect of his treaty-making duties" and "reckless decision-making.” According to the report, Evans must bear “significant level of culpability for the Sand Creek Massacre." Read more.

Nov. 29 –  A park ranger discusses the surprise attack on the Cheyenne and Arapaho Village at the National Historic Site at 10 a.m.

Nov. 29 – "The Sand Creek Massacre and the Civil War" film screening at the History Colorado Center at 2 p.m. Free with museum admission.

Dec. 2 – There will be a candlelight vigil at the Denver Art Museum "Wheel" Sculpture at 6 p.m.

Dec. 3  – Presentation of the Captain Silas Soule Memorial Plaque, and walk to the Colorado State Capitol Building, starting at the intersection of 15th and Arapahoe in Denver at 10 a.m.

Editor's note: The original post misstated the time of the film screening at the History Colorado Center. The film is scheduled for 2 p.m.