The Southern Education Foundation analyzed federal data and found that 51 percent of  public school students across the country (and 42 percent in Colorado) were low income, a statistic the report authors called a "defining moment." Other education advocates were somber as well.

“We’ve all known this was the trend, that we would get to a majority, but it’s here sooner rather than later,” Michael A. Rebell, the executive director of the Campaign for Educational Equity at Columbia University told the Washington Post. “A lot of people at the top are doing much better, but the people at the bottom are not doing better at all. Those are the people who have the most children and send their children to public school.”

This map shows how Colorado compares to other states. 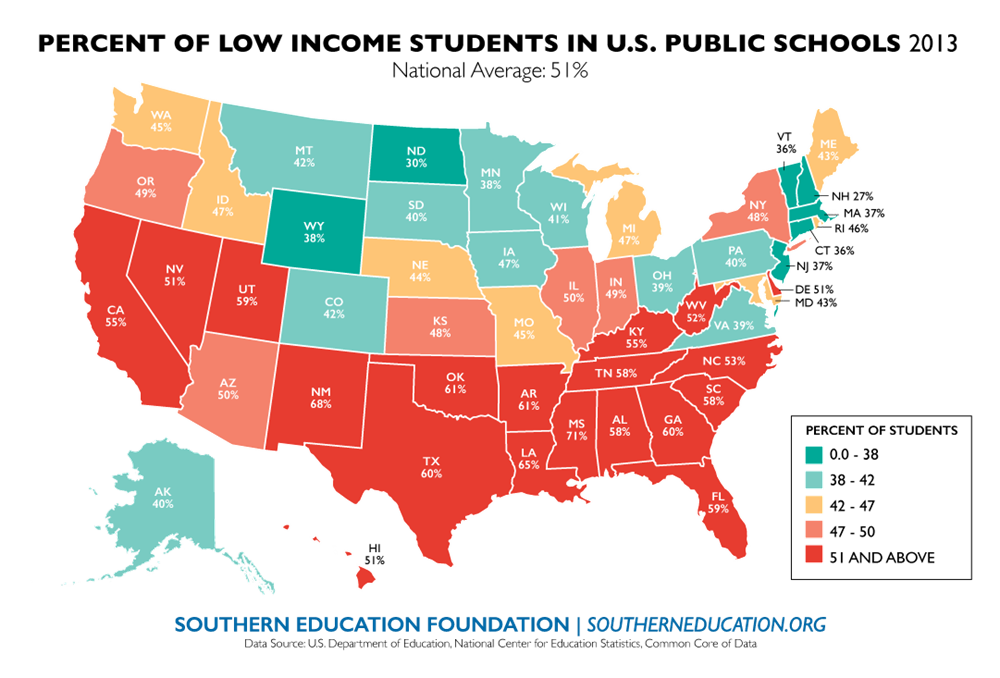 The report defined low income as qualifying for the federal free and reduced lunch program. That program's threshold is commonly used to define poverty, as the official federal measurement for poverty is broadly seen as flawed. NPR reports there are three key problems with it:

1. It doesn't account for geographic differences. The poverty line is the same, no matter where you live — whether it's in New York City or rural South Dakota.

3. It doesn't consider the value of of government benefits, such as food stamps and tax credits.

The official poverty line is still important because federal programs like Medicaid are tied to it. While it looks like that will not be adjusted anytime soon, The Post says Congress just began debate on the country's main federal education law.

The most recent version of the law, known as No Child Left Behind, has emphasized accountability and outcomes, measuring whether schools met benchmarks and sanctioning them when they fell short.

That federal focus on results, as opposed to need, is wrong­headed, Rebell said.

“We have to think about how to give these kids a meaningful education,” he said. “We have to give them quality teachers, small class sizes, up-to-date equipment. But in addition, if we’re serious, we have to do things that overcome the damages­ of poverty. We have to meet their health needs, their mental health needs, after-school programs, summer programs, parent engagement, early-childhood services. These are the so-called wraparound services. Some people think of them as add-ons. They’re not. They’re imperative.”