When 18-year-old Destiny Carney blows into a room, longboard under her arm, it’s like a fresh breeze.

“Longboards save money,” she says, with a laugh. “I will tell that to everybody. Buy a longboard!”

She’s bubbly and laughs easily. Thick curly hair frames a face that doesn’t stop smiling. It’s not surprising when she says what would make her happiest in life.

“I really want to be a florist,” Destiny says. “I would love to own a flower shop.”

"Everyone has a mask"

Destiny says everyone has a mask. It helps hide what’s going on inside and what her life was really like.

“I don’t think anyone ever knew. I think they just thought I was weird,”

Not only was she homeless most of her childhood, but her mom -- though she always had a job -- was a drug addict. Destiny often had to feed and take care of her siblings. Without a home, she felt different, ashamed and she tried to hide who she was.

When her friends asked to sleep over, Destiny would say she was grounded.  When she needed clothes, she’d tell friends her mom was mean and got rid of her stuff and could she have some of their stuff?

“I wasn’t a person who was, ‘Oh, I’m homeless. I’m going to be sad about it,’” she says. “Ever since I was young I felt different. ‘Oh, I’m a butterfly in a crowd of moths or something.’”

On this day, Destiny dressed in flashy clothes bought from a thrift store - a bright, colorful, 1970s-style outfit.

“People were like, ‘You’re weird, you dress how my mom looks in her younger pictures.’ And I was like, ‘Yes!’ And so I think everyone just thought I was an oddball.”

Destiny was also chubby in middle school, and she was bullied because of it. By freshman year in high school – just a couple of years ago– it was the lowest point in her life. Her mom wasn’t around much. Destiny says she wondered why her mom didn’t want to spend time with her, where she was and why she wasn’t her mom’s first priority. Destiny started smoking weed, using other drugs, and ditching school. She became very depressed.

“I went to class one day and I had a teacher say, ‘Why are you even coming to school? You’re going to fail. What’s the point?’” she says. “I never went back.”

Destiny’s mom never asked her what was going on or how she was doing. Her mom was dating a man who beat her. So Destiny ran away.

“I was against everybody,” she says. “I didn’t want anybody to talk to me. I feel like that was my lowest point, I didn’t know what I was living for, really?”

Destiny pauses and says, “That year I tried to commit suicide.”

Destiny says, thankfully, it didn’t work. A close friend helped her through that time in her life. Then, she says she started meeting the “right people at the right time.” 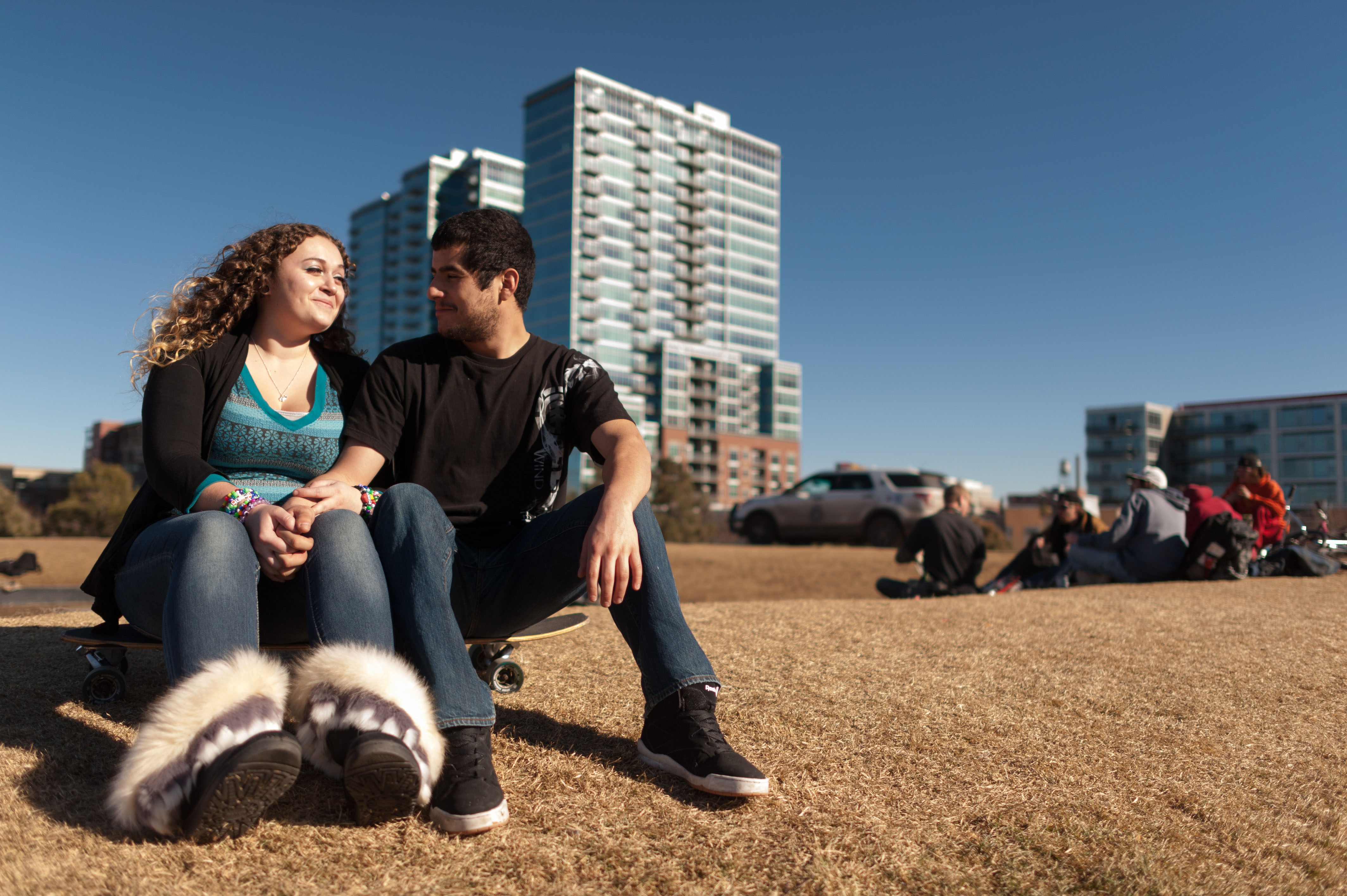 (Photo: For CPR/Kevin Moloney)She met her boyfriend, Adrian Pasillas, who helped steer her in a better direction. “He’s so awesome,” she says.

He told her she was smart and made her see her own self-worth.

“Ever since I met him, I haven’t been that sad person anymore,” she says.

He steered her to a small public high school, the Denver Center for 21st Century Learning, which can be key for many youth living in poverty. The school targets students who’ve struggled elsewhere.

“It was my first time being in a small school,” Destiny says. “My teachers actually asked me questions, got to know me and I was like, ‘Oh my gosh, this is so crazy.’ These people know my name and it’s not even the second semester yet.  At my other school, they could care less what my name was.”

A teacher encouraged her to apply for a position at Project Voyce,  a Denver non-profit that works with youth in high school. Destiny says Project Voyce changed her life.

“I’m not a teacher yet but I’m getting to do these teacher things and it’s so much fun,” she says. 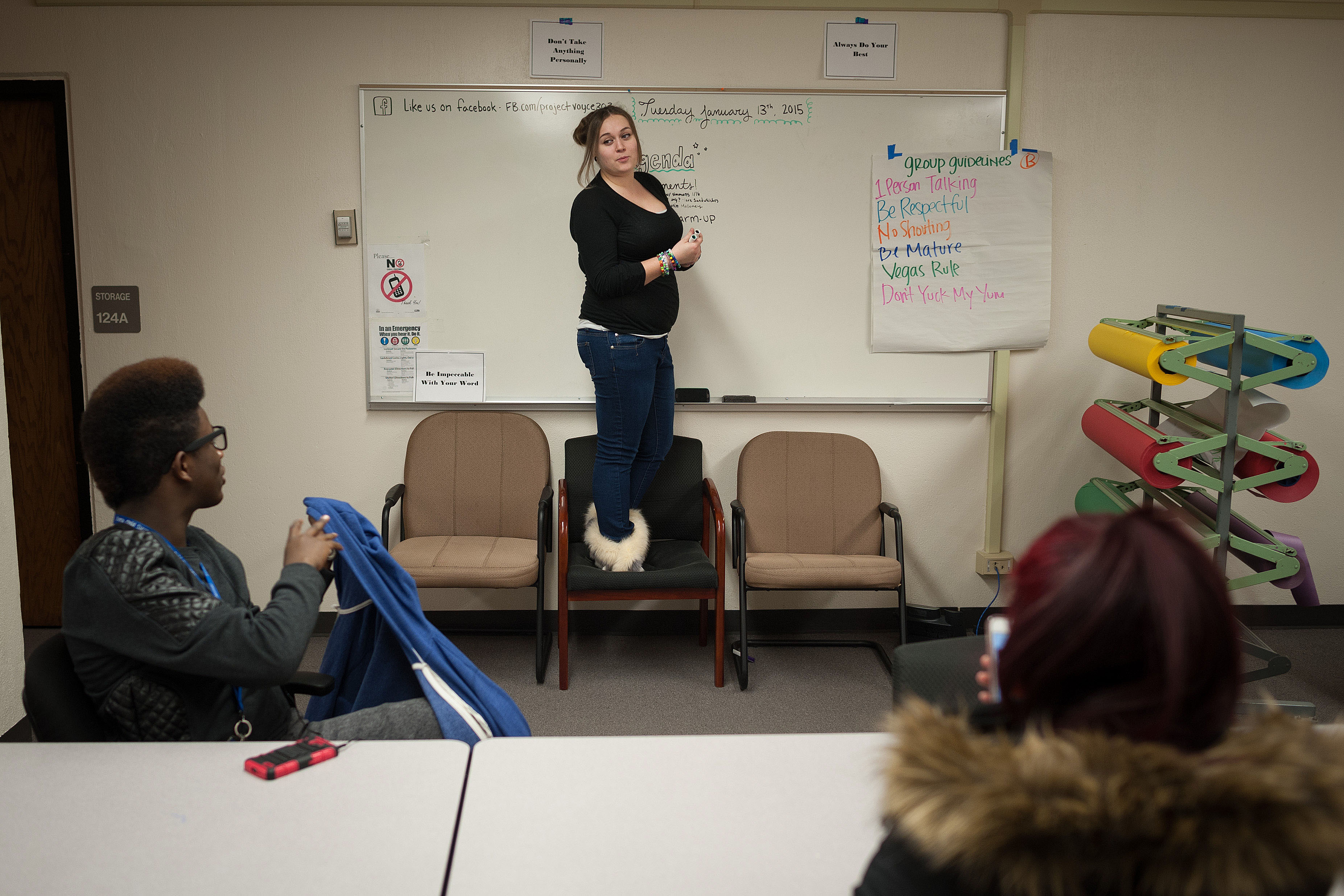 (Photo: For CPR/Kevin Moloney)In her job at Project Voyce, Destiny guides other young people, helping them learn how to communicate with teachers and be their own best advocates. She’s come to realize that it often takes just one person to change the trajectory of a life. It’s helped her learn to be who she wants to be.

“I spend $40 a month on laundry [and the] bus. The bus is so expensive. I feel like Denver is just getting so much more expensive to live in.”

The future seems daunting. A statistic sticks in her head that one in five kids who grow up homeless remain homeless. She says the atmosphere in the homeless community makes it hard to climb out.

“I feel that when you are homeless and the environment the people you are around sometimes kind of makes you feel like you can’t do it,” she says. “Because some of the other people are, ‘ well, you know I really wanted to do this but I’m just going to get Section 8 [government funded housing]. They’re not really trying hard and other people want to bring you down and there’s drama and I feel like once you get in poverty, it’s kind of hard to get out.”

Still, Destiny feels she’s finally broken away from her past. It’s hard to know the next steps and she finds the thought of being a teacher exciting.

She doesn’t have enough money even for community college, but says that as long as she focuses on helping people, “good things will come to those who wait.” And she hopes her story will help other kids in poverty.

“I used to be so ashamed of being homeless and living in poverty,” she says. “But if I could tell people about my life, what I went through, what I’m doing now and what I want to do -- if it gives them hope, who cares if I’m a little bit embarrassed?”

A grant Project Voyce was expecting didn’t come through so Destiny doesn’t work as many hours as she’d like. For now, she’s just happy deepening her knowledge of teaching, comforted by her belief that things always change.

This story is part of our ongoing exploration of Colorado kids who are living in poverty, how it affects their lives and our common future. We'd like to hear your ideas about about what can be done about child poverty in Colorado. Share your thoughts through our Public Insight Network. Next Thursday, we’ll have a profile of another teenager,  Chaunsae Dyson.