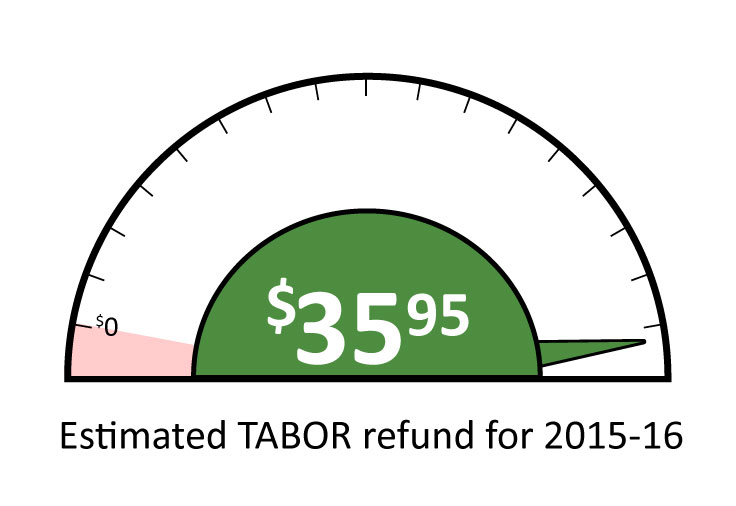 You've probably heard you might get a TABOR refund. If you're like us, you're wondering how much that could be. We set out to answer that very question.

What are TABOR refunds?

Under the Taxpayer's Bill of Rights, state spending in Colorado is only allowed to increase at the rate of population growth plus inflation.* Any money the state raises above that amount must be returned to taxpayers through a complex set of formulas.

Between a voter-approved TABOR timeout passed in 2005 and the Great Recession, it’s been a decade since residents last received a rebate. But with Colorado’s economy once again booming, analysts project the state will need to start returning money to taxpayers either this fiscal year or next.**

The impact of tax credits:

The state can't spend any money above the TABOR cap ... but it can give it away. By passing tax credits, the legislature reduces how much tax revenue it brings in in the first place, and hence how much money is left to refund to taxpayers.

Tax credits serve numerous purposes: to lure businesses to the state or to keep them here, to improve certain residents' finances or encourage residents to do certain things. Lawmakers have proposed numerous new tax credits this session. Our goal with this project is to help you weigh the merits of these proposals against the direct financial impact they could have on you.

Saying taxpayers are getting a TABOR refund is easy. Determining what they get, and how, is pretty complicated.

Lawmakers have changed the refund mechanism several times over the years. And efforts are underway to alter it again. At the moment, here’s how money would be returned in coming years:

How we calculated our average refund amount:

For the purposes of this experiment, CPR is looking at the fiscal year that starts this July 1, 2015. For this year, OSPB estimates the state EITC will already be in place and all refund money will be distributed through the 6-tier state sales tax refund.

It's difficult to calculate the impact of each tax credit bill on six different refund levels, so CPR is simplifying things by just using an average refund level.

We got that by dividing the total amount of money projected to be refunded next fiscal year, $186.5 million, by the number of taxpayers in Colorado, 3.187 million. Your actual refund will vary depending on your income, from between $42 for the lowest income earners, to $122 for the highest.

*This only applies to state revenues raised through taxes and some fees. Federal money and state enterprises (such as colleges and universities) are exempted from TABOR limits.

**Colorado’s tax revenue forecasts are calculated on a quarterly basis by the governor’s Office of State Planning & Budgeting and Legislative Council Staff. The two offices currently disagree on when revenues will hit the TABOR threshold. CPR is using the numbers from OSPB’s December Revenue Forecast (their TABOR refund calculations start on page 40).

How the average refund has shifted this year

Two new tax credits brought down the average refund amount: a tax credit for donations to Colorado charities and a credit for tobacco distributors who sell out of state.

After March 19, we updated our calculation to use updated revenue outlooks from the governor's office. The amount expected to be returned to taxpayers fell by $6.61 billion in the updated outlook, so the average refund amount fell as well. A new cost estimate for a renewable energy investment credit refund brought down the average expected refund.

On March 11, legislators killed the home health care credit for seniors, which increased the expected average refund. It was the most expensive active credit, costing $9.13 per average taxpayer. New cost estimates for credits to unpaid medical professionals who mentor graduate students and employers who help pay off student loans brought down the average expected refund.