For nearly 400,000 Colorado children, summer vacation means going without the free or reduced-price lunches they normally get at school. And only a fraction of students actually take advantage of public food programs in the summer. But in Grand Junction, there's a new effort to keep poor kids fed when school is out.

It's called the Lunch Lizard.

It's a food truck. And one recent morning Ann Marie Ahern with Mesa County School District 51 was inside, handing over a paper tray piled high with food to a waiting youngster.

"Hi guys, come on up!" she says to others waiting in line.

The Lunch Lizard is wrapped in cartoon-y desert images with big letters proclaiming "Kids Eat Free." Four days a week, the truck visits parks and playgrounds in some of the county's poorest neighborhoods. It brings federally-funded lunches to children who might otherwise go without. 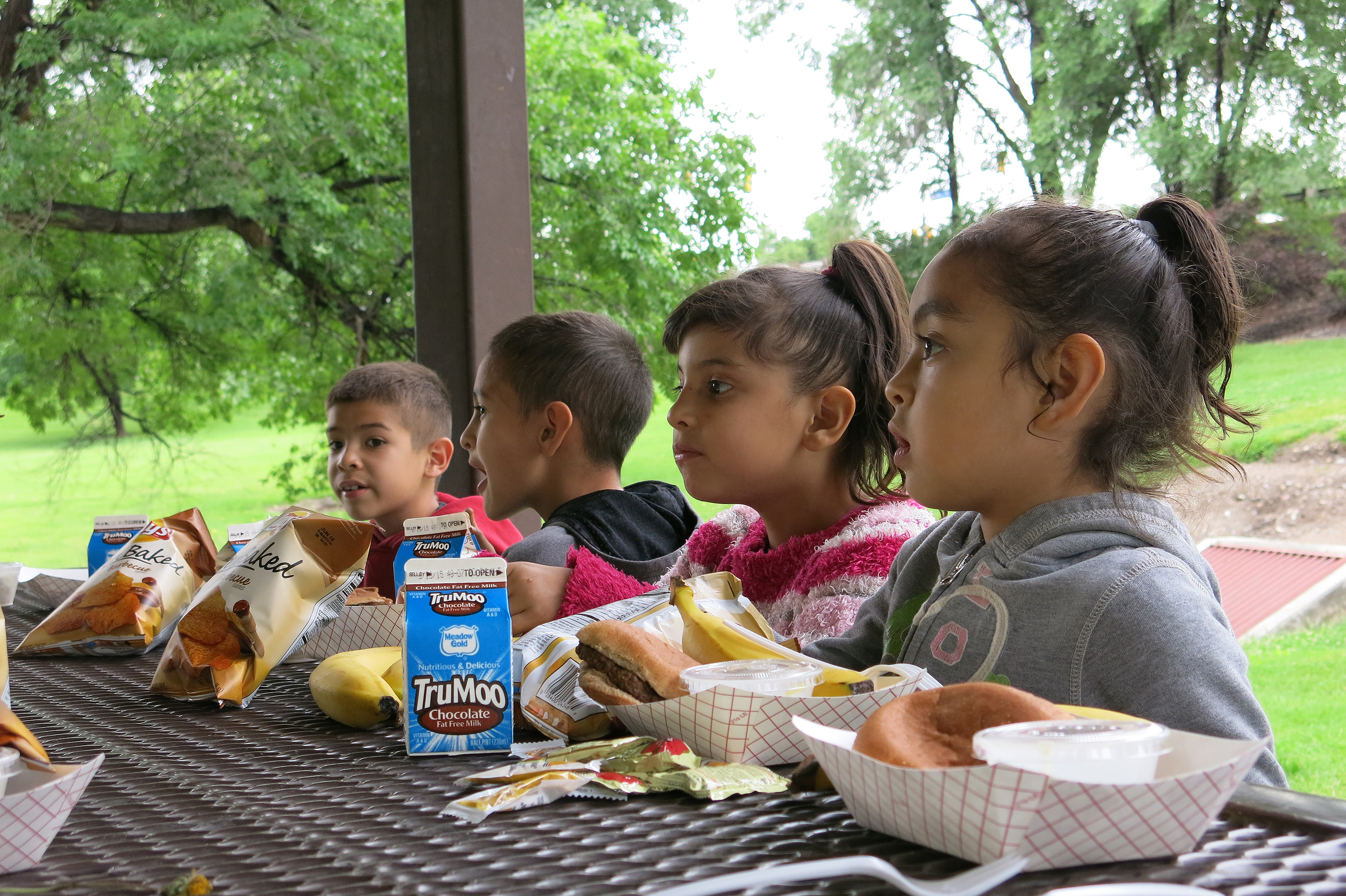 (Megan Verlee/CPR News)Second-grader Elena and her friends turned a recent a visit to the the truck into a chance for a grassy picnic.

"I kind of make lunch by myself," she says. "Peanut butter and jelly sandwich and cereal."

And, yes, she says a hamburger is a welcome change.

Wave of the future?

The Lunch Lizard is Colorado's eighth mobile summer food program, and the state's first on the Western Slope. The trucks are an increasingly popular solution to a fundamental problem for summer meal programs: Few kids actually use them.

In Colorado, only about one in 10 children who qualify for free or reduced-price lunch during the school year ever visit a summer lunch site. A lot of times, it's because parents and caregivers can't get them there.

"I know if it were my child, maybe a latch-key kid, and I was at work, I might not allow them to walk somewhere or ride their bike somewhere to go have lunch, and they're stuck at home. So we're going to bring it to them," she says.

The Lunch Lizard attracts more than 200 kids on sunny days. It only took two months for school officials and partners to get the program up and running after discovering the district would have to scale back the number of school-based lunch sites it operates.

One of the hardest parts was just finding the truck.

"We were able to source this one in Denver off Craigslist, actually," says Dan Sharp, director of nutrition services for the school district. "I hate to admit that, but it was the best deal."

The Western Colorado Community Foundation put up the money to buy and outfit the Lunch Lizard. The group wants to expand to an eventual fleet of trucks to get food to kids across the region. Foundation staff and board members were moved to action by reports on the growing problem of childhood hunger in Colorado and across the country.

"Sixty percent of the teachers said that every single week they are working with children that come to school hungry and are unable to focus and learn," says program associate Jody Valente. "So I think the numbers really speak volumes and we just didn't know that it was such a big issue in our community. It's sort of a silent problem."

The problem is worse in Colorado during the summer than it is in many other places.

Last year, the state ranked 44th out of 50 for the percentage of low-income children served by its summer meals program, according to the Food Action and Research Center, a national advocacy group. Cate Blackford with Hunger Free Colorado says much of the problem on geography.

"We're a very large, very rural state. And so it means that while we have lots of programs in the urban areas, there are far fewer in the rural parts. And so there are lots of kids who don't have access to that resource," Blackford says.

To address that gap, the future of summer lunches for poor children may have to shift from cafeterias and lunch trucks to the grocery store. The federal government has been experimenting with a pilot program that sends low-income families a benefit card each summer that can only be used for food. So far the results have been promising.

"What [they] found, which is really exciting, is that the most severe forms of child hunger were reduced in those families that were participating. So families were using those extra dollars to buy healthy food for their kids," Blackford says.

A bill in Congress would extend the program to all qualifying low-income families, but it's likely to get caught up in Congressional budget debates. In the meantime, summer programs like Mesa County's Lunch Lizard will continue to fill the need for many families.

Jennifer McKnight has been bringing her three children to the truck every day. As her kids race around a nearby playground, McKnight says the free lunches have helped add a bit of breathing room to her family's tight budget.

"Oh, we appreciate it so much," she says, "because it is so hard to spend all the money on food and stuff. Food is very costly."

McKnight may get to enjoy the new lunch truck for longer than planned. The Lunch Lizard was only scheduled to run through June, but it's been so popular, the school district is now deciding whether to keep the truck on the road into July.