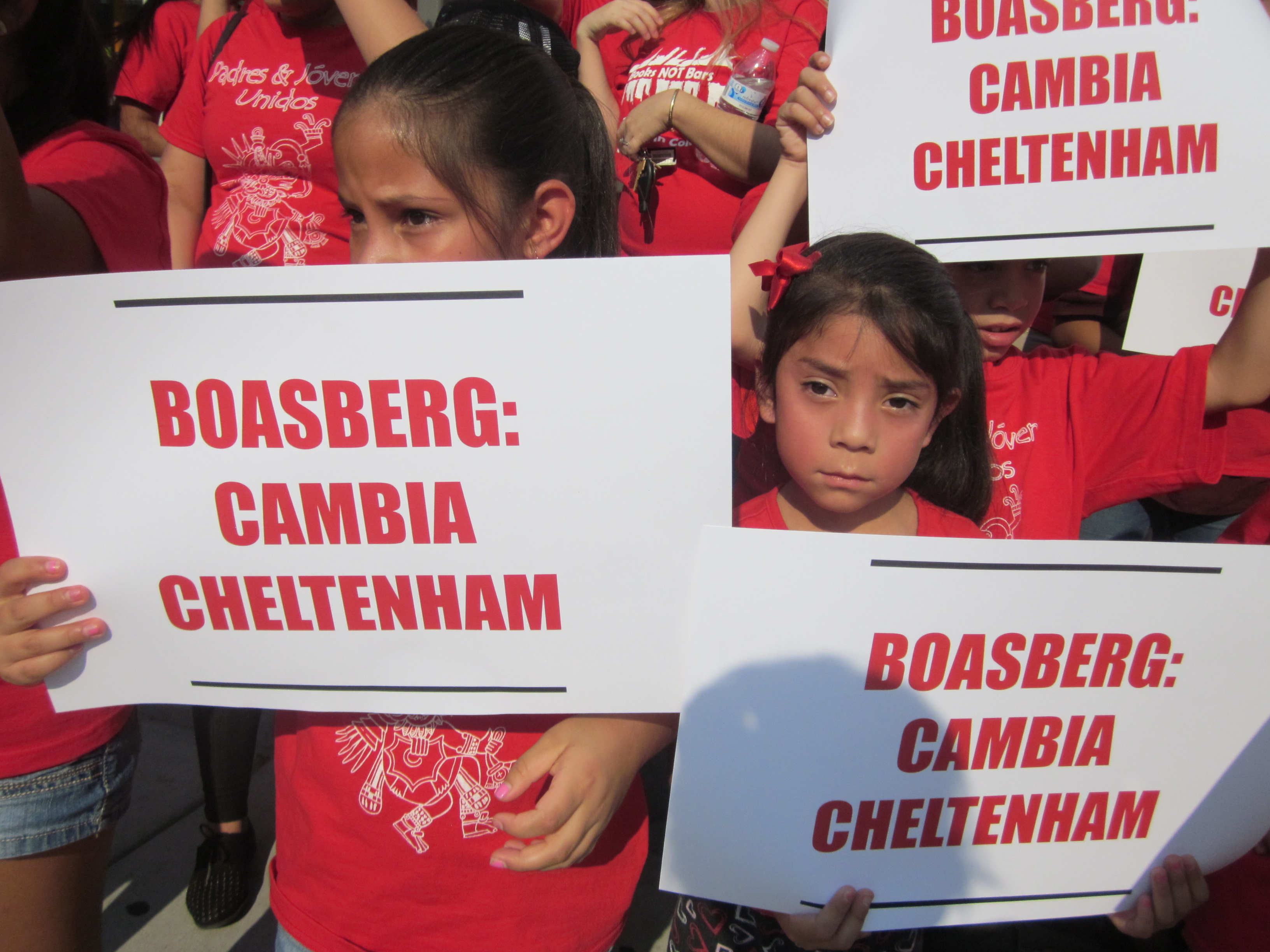 Update: DPS officials announced that Dr. Kalpana Rao has resigned her position as principal of Cheltenham Elementary School. The move comes after parents, beginning last April, criticized her by asking Hispanic children eat lunch on the floor of her office after misbehaving.

"While the district’s investigation found no basis for the alleged parent concerns, it has become increasingly clear that I may not be in the best position to help the Cheltenham community fully heal. I want to ensure that there are not any distractions from what should always be the primary focus – our fantastic kids," Rao said in a statement.

“We exposed this principal, and we demanded change, even though it took parents three times to demand change, our persistence has paid off,” said parent Carmen Alvarez.

“We demand that parents be part of the hiring committee to pick a new principal,” she said. “There is already a history of Denver Public Schools putting a bad principal in a failing school. While the district has finally listened to us as parents, we cannot trust that their process will be open and transparent. We want to start out the right way, with full parent input.”

An interim principal has been named -- CJ Grace – and she starts the job Monday. Grace is currently a director in the district’s department of English language acquisition.  DPS Chief Schools Officer Susana Cordova said Grace is bilingual, has a strong track record of working with English language learners and was a principal in Taos, New Mexico.

A principal selection committee to hire a permanent principal will include district officials, parents, staff and community members.

Cordova said children eating on the floor should not be tolerated. District officials conducted an investigation into the allegations that Rao told a group of parents to “go back to their farms.”  It concluded that Rao never said those words.

She said the district did not ask Rao to resign.

“While investigation cleared her she felt that at this point in time the conditions at the school were escalating and that her presence was becoming a distraction,” Cordova said.

“We have a lot of confidence in Kal [principal Kalpana Rao], " she said. "She’s incredibly focused on creating rigorous classrooms for kids who haven’t had that opportunity. We all come with strengths and weaknesses in different areas as does Kal."

Parent Marina Guerrero said the fight for quality education for every child in southwest Denver is far from over, referring to the 40 point gap in achievement scores between students of color and white students.

“Our kids are just as good as any other kids,” she said.

Original post: Dozens of parents at Denver’s Cheltenham Elementary are demanding the removal of the principal for alleged racist behavior. They say she has failed to improve school academics, and failed to respect parents, or use discipline fairly.

Parents and children waving signs held a press conference outside Denver Public Schools headquarters Thursday evening. They then presented statements to the district’s school board.

The issue was sparked by an incident in April when several children who were misbehaving in the lunchroom were sent to principal Kalpana Rao’s office. There, they had to eat their lunch on trays sitting on the floor. The children were Latino. The school is 91 percent minority, with 99 percent qualifying for free and reduced lunch.

The incident struck a chord in parents and some Latino activists, believing it to be reminiscent of an incident 23 years ago at another DPS school when Anglo and Latino students who got into trouble were treated differently.

The Spanish-speaking students who misbehaved sat on the floor, while the Anglo students sat at a table, recalls Ricardo Martinez, executive director of Padres y Jovenes Unidos. The group organized Thursday’s press conference.

“This is the third time that parents have asked DPS to remove this same principal,” said Marina Guerrero. “How could they forget us, and the children at our school? How can they forget that this principal humiliated our children by having the meal off the floor, was racist to us as parents by telling us to ‘go back to the farm’?” 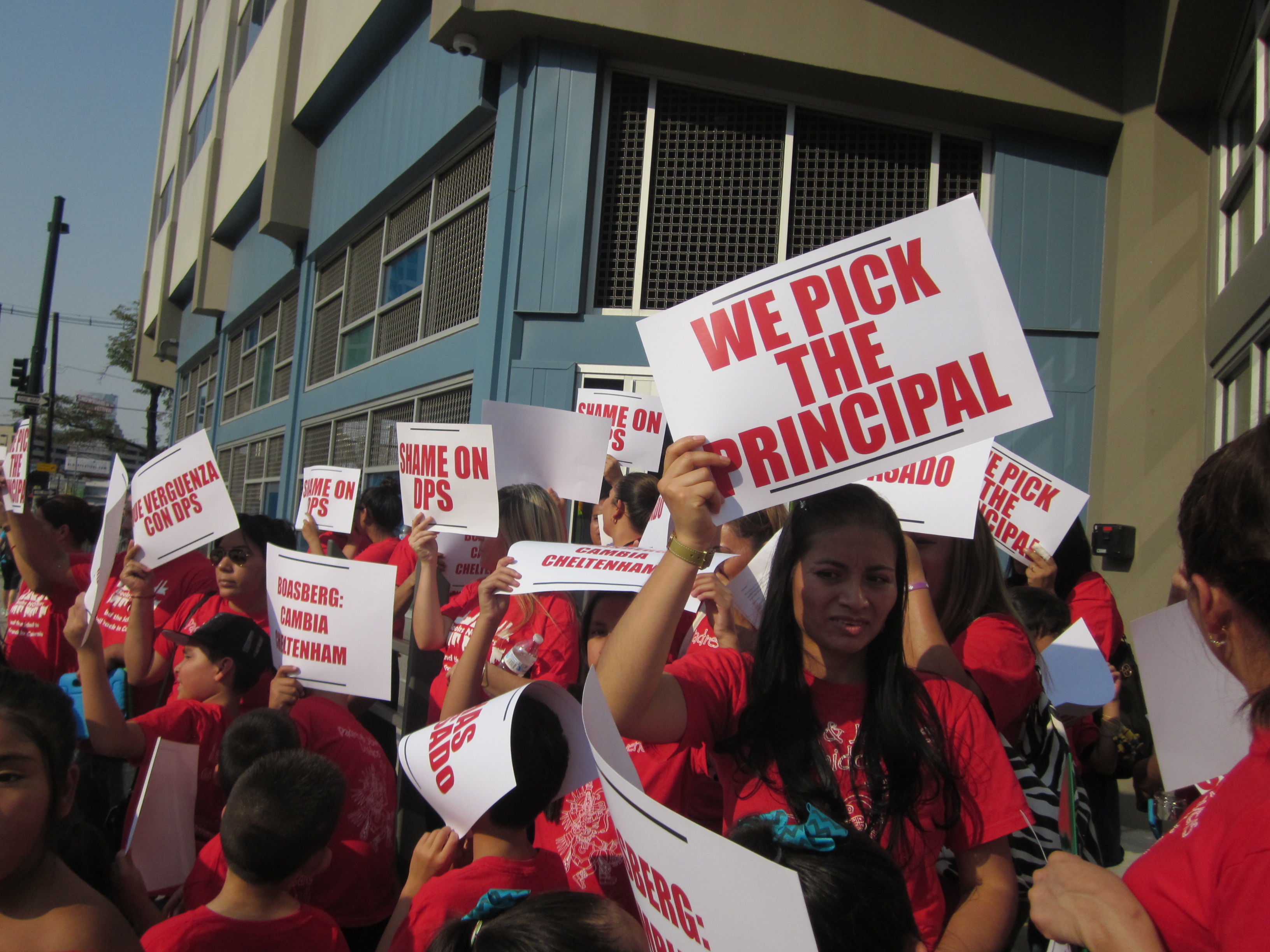 (Photo: Courtesy of Jenny Brundin/CPR)Parents say they have given the district 400 parent signatures asking for the principal’s removal.

Principal Rao sent a letter to parents in August:

“In the spring, I heard very clearly parent concerns about some children who have eaten lunch on the floor in the main office. I understand the painful history of another instance, 23 years ago, when Latino parents protested after their children were forced to eat lunch on the cafeteria floor as punishment. This was wrong then and it is wrong now. It is not our school’s intention to humiliate any student in any way. This would run contrary to my deep values, beliefs and respect for the kids at Cheltenham."

She said the practice has stopped and will not be repeated. “I apologize again that this was allowed to happen at our school,” the principal wrote.

In the letter Roa describes her own experiences growing up in Wisconsin as a person of color.

“I want our students of color to feel more connected, so they feel their school knows and values them and their cultures,” she wrote. “Even though I am fluent in Spanish, I know that I still have a lot to learn about the culture, and I will continue to work to build better relationships with all of our families. I am eager to do so and I look forward to forging stronger connections this coming school year.”

Denver’s Chief Schools Officer Susana Cordova says it’s important to take the community’s concerns seriously. She says the district is in the process of investigating the two allegations, that of the children repeatedly eating on the floor after the principal was told not to do that and an alleged comment from the principal telling a group of parents to ‘go back to the farm.’

“We’ll be able to have a better sense of the accuracy of the allegations and be in a position to make decisions what to do with that information,” she said.

But parents say they are upset about a lot more. They say two out of three students are failing at Cheltenham and the school ranks in the bottom 10 percent of all elementary schools in academic performance. They say in-school and out-of-school suspensions have gone up dramatically. They’re also concerned that over the past two years, most of the teachers have left the school.

“It is definitely something that we want to look into anytime that happens,” she said. “We believe teachers are our most valuable resource. We’ve put a lot of emphasis on having healthy school cultures and working in productive and positive teams.”