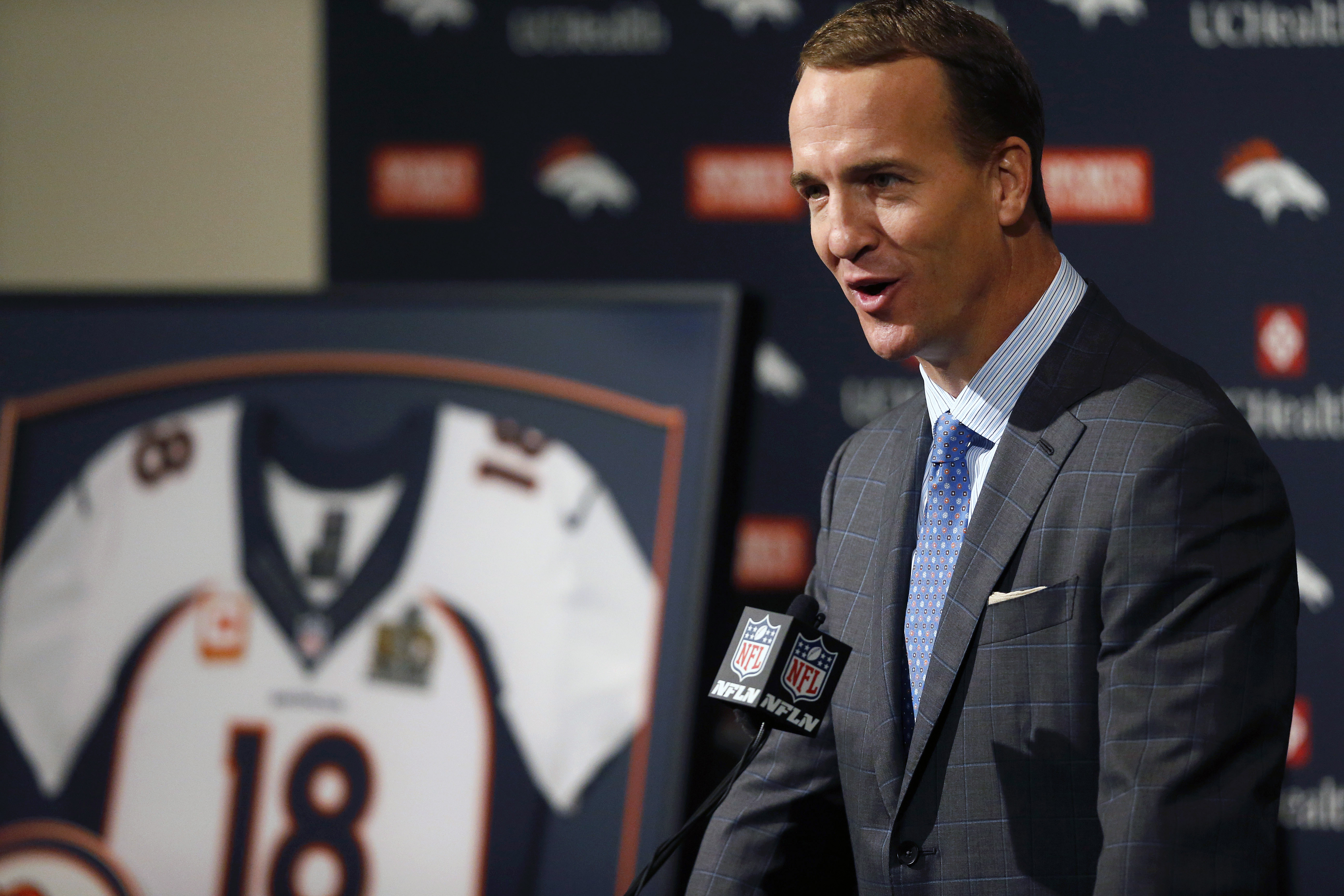 An emotional Peyton Manning officially announced his retirement from pro football -- and the Denver Broncos -- on Monday during a packed and sometimes emotional news conference at the team's headquarters in Englewood.

Now almost 40 years old, Manning recalled a conversation he had with the late NFL great Johnny Unitas, when Manning was struggling in his first season with the Indianapolis Colts. The team had just suffered a loss in Baltimore and Unitas approached Manning after the game and told him he was rooting for the rookie to succeed – and to stay at it.

"I hope he knows that I have stayed at it. And maybe he’s even a little proud of me. There’s just something about 18 years --18 is a good number. And today, I retire from pro football."

Manning retires his No. 18 jersey as the winningest quarterback in NFL history. He threw for more yards and more touchdowns than anyone who ever played the game.

He also retires as a two-time Super Bowl champion – previously with Indianapolis and most recently last month with the Broncos, and the team’s win over the Carolina Panthers in Super Bowl 50.

Manning came to Denver on March 20, 2012, looking for the chance to win another title in the twilight of his career. No team won more games than the Broncos during his stay. And his barks of “Omaha” at the line of scrimmage will forever be part of Broncos fans' vernacular.

"I revere football. I love the game. So you don’t have to wonder if I’ll miss it. Absolutely. Absolutely I will," Manning said.

As he looks back, he says he'll also miss "Demaryius Thomas telling me that he loved me, and thanking me for coming to Denver after every touchdown I threw to him."

Thomas was among numerous teammates present as Manning spoke. Broncos coach Gary Kubiak said he only coached Peyton Manning for nine months, "but I'll remember it for a lifetime."

As will Denver GM John Elway -- the last Bronco to quarterback the team in a Super Bowl.

"You look at what we’ve done the last four years, and a lot of that is attributable to this guy. Because he made my job easy," Elway said.

Kubiak added that he spent 17 seasons trying to beat Manning and he "wasn't very successful."

Manning is destined for the Hall of Fame, but his final season with the Broncos was a difficult one. The team’s offense struggled throughout the year – and Manning was even booed by Denver fans before he was removed from a game against Kansas City in November, suffering a foot injury. Many questioned whether he would play another game as a Bronco.

There also were some off-field issues. Al Jezeera reported that Manning's wife had received a performance enhancing drug banned by the NFL. Manning strongly denies using the drug. And more details have come out about his alleged harassment of a female trainer during his college days. He denies that allegation as well.

The tough season led him to embrace being positive, he said.

"Football has taught me not to be led by obstructions and setbacks, but instead to be led by dreams," he said.

Fans around the city said they were sorry to see Manning go. Darcy Rock, of Denver, said Manning brought stability to the quarterback position -- and good reason to watch games.

"I mean, he made football here really exciting, especially after a few years of really troubling quarterbacks and sad results for our team."

Gerald Bell of Denver rattled off a list of great quarterbacks like Elway and Joe Montana and Dan Marino and Tom Brady.

"Peyton Manning, in my opinion, is the best quarterback that I’ve ever seen – by far," he said.

Manning wrapped up his farewell by emphasizing how much he reveres the game and how he leaves it with no regrets.

"I fought a good fight. I finished my football race, and after 18 years, it’s time. God bless all of you and God bless football," he said.

And, for good measure, before walking away from the podium, Manning left fans with one last – “Omaha!"