As the planet heats up, more Colorado schools are experimenting with energy efficiency and other environmental programs – from the Poudre School District slowing greenhouse gas emissions by more than 5,000 tons since 2005 to a Highlands Ranch school building outdoor classrooms and composts.

Mackintosh Academy in Littleton, a small private school, has decided to go the whole nine yards. It started last year with a comprehensive study into solar energy that won a group of students the President’s Environmental Youth Award and a grant to install solar panels on their school roof.

But it didn’t stop there. An idea was born – why not create a Smart Village? The Smart Village movement is largely based in rural developing countries. In the Mackintosh context, it means the school is working toward sustainability and zero waste, but is also finding ways to act on values like promoting innovation, diversity, and caring for one another.

The best way to show me what the beginning of a Smart Village is like was to take a tour.

On the way down to the greenhouse, seventh grader Si Crawford points to some railroad ties on a snow-studded steep hill.

They’re going to terrace the hill, Machu Picchu-style. Typically, when it rains, water comes pouring down the hill, forming a "giant mud pit," he said.

But the students are changing that by taking a cue from the ancient Incas. The seventh and eighth graders studied the agriculture and water distribution systems of Machu Picchu – cutting steps into the earth increases the amount of space to grow food and ensures a longer growing season.

"We’re going to terrace it off and use their idea to help the water soak into the ground better, and so you can have more plants out during the summer," said Crawford, ticking them off -- pumpkins, melons, squash, cucumbers, flowers and sunflowers.

Inside the warm greenhouse, the plants germinate in the greenhouse in the spring and then are transferred to the terraces where they will be able to grow fully. Others will be sold at the spring festival.

The kids have to be entrepreneurial. There isn’t a lot of money at Mackintosh for these projects so the students continually have their eye on grants -- and commercial ideas.

Throughout the winter, they sell salad greens and herbs like lettuces, kale, microgreens, spinach, mustard greens, arugula, endive, basil, cilantro and carrots. Tomatoes, cucumbers, pumpkins, and flowers are sold at the spring festival.

Earlier in the year, every Friday the students would sell the lettuce crop by practicing "cut and come again" – akin to giving the lettuce a "buzz-cut."

"Just cut off the top of lettuce leaving the plant still alive," Yates said. "Then two weeks later, you have another harvest."

They hosted a big community salad celebration, where they fed 100 people from the neighborhood. Diners also heard a speech from Root Down owner Justin Cucci on sustainable growth. The event raised funds to buy seeds, railroad ties -- anything needed to help grow the greenhouse, the kids say. 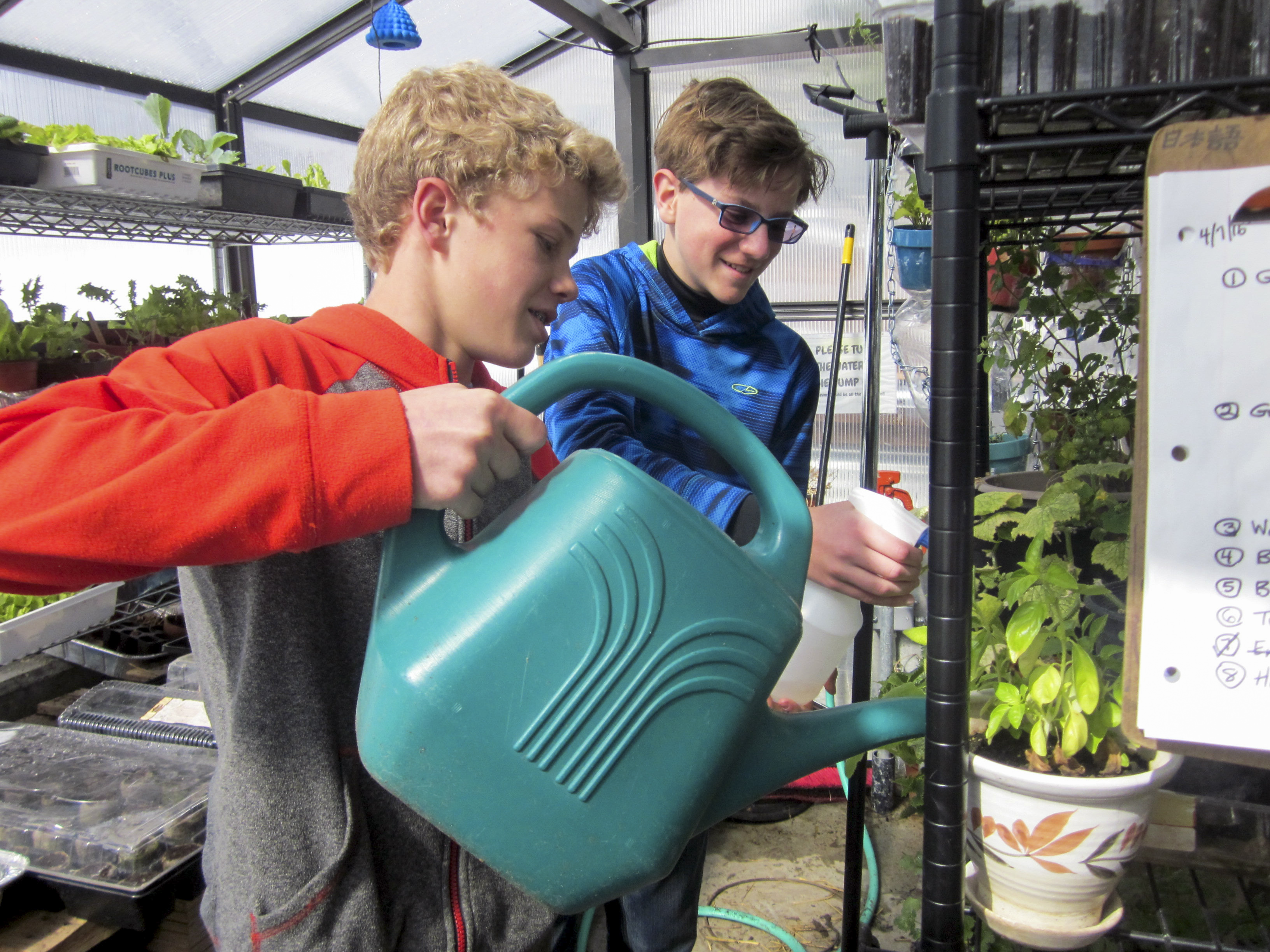 In the greenhouse, the kids are continually poking around. They peer intensely at the plants, checking to see if they are too dry. They really care about this project.

"It’s awesome," said seventh grader Quinn Yates. "It’s so amazing to see all the work that you’ve done turn into a plant and turn into something green and beautiful. It’s really amazing."

Sixth grader Tanner McElreavey is sweating in the warm room so we move on – to the glass recycling bin.

A New Way To Learn

The Smart Village initiative requires kids to learn in a way that's not just sitting at a desk. They investigate a subject, develop ideas and debate them out as a group.

One example of that is recycling. The students learned that only 17 percent of glass in Colorado that goes into mainstream recycling centers is recycled. Because the glass is heavy, it often falls to the bottom of the conveyor belt, gets broken and either ends up in the landfill because it’s too expensive to sort out from all the other garbage.

The students' solution: Separate glass from other recycling so it doesn't need to be sorted later.

"You can melt it down and make it something else time and time again," said student Delia Guilbert.

How Low Can You Go?

Throughout the school, I notice the lights are off. The heating and air conditioning are also off.

Gilbert said today is a "how low can you go" day. Lights are off, students will try to not use the microwave, appliances are unplugged, and kids are wearing light jackets on this crisp spring day.

"We’ve been noticing since we got the solar panels, we’re still drawing a lot of energy from the grid," Gilbert said. "Because it’s almost this mindset of, 'Well, we have solar panels, so all of our energy is green.' Although we’re realizing that we’re using enough that that’s not always the case."

So the students are trying to figure out if they can run the school solely off the energy from the solar panels. We’ll know by the end of the day.

As we walk, the kids tell me about the reusable mesh kits that hold reusable dishes and silverware for school events to cut down on paper waste. They’ve set up a terra-cycling bin – candy bar wrappers, Capri Sun pouches all can be up-cycled into consumer products.

The students are also doing deep investigations into the energy efficiencies of the buildings on their small campus.

Sixth grader Tanner McElreavey’s specialty is water heaters. He takes me into the small water heater room in the pre-school building.

"I found this water heater was installed in 1980. That makes it ridiculously old," he said. McElreavey has researched the current code and the different types of water heaters.

"A tankless water heater actually costs a lot but it saves a massive amount of energy," he said.

McElreavey will be writing a section of grant for a new water heater. Other students have investigated walls, windows, insulation, and other building parts.

To help deepen their understanding of humans impact on Earth, the students take me to a simulation of another planet.

I have not, though it’s waiting on my bookshelf at home.

Yates is referring to the habitat on Mars where the book’s main character, astronaut Mark Watney, tries to eke out an existence after being stranded. The students helped create a Mars unit in science class that involves creating a sustainable habitat similar to the one Watney made to survive. Potatoes are growing in one corner; students are building a simulation rover in another.

This units let them study what human’s impact would be on Mars, and lets them reflect on whether humans should colonize the red planet.

"Is it fair to Mars?" asks eighth grader Delia Guilbert.

"We should clean up our own planet before we trash another," Quinn Yates concludes, the other students nodding.

Outside in the bright sun, Quinn Yates announces the amount of energy from the grid the school used that day.

"Basically none," he said, "because were all running on the solar panels."

But while there's much to be happy about at the school, the conversation is more pessimistic when it turns to the future of the planet. It’s sad, the students say, that other generations have torn it apart.

But Guilbert jumps in and said it’s easy to feel anger or bitterness, like their generation is not part of the problem. But she said there is growing awareness in their parents' -- and even grandparents’ generation -- that something has to be done.

The students say their experience turning their school into a Smart Village has shown them that small, concrete steps can lead to big results. And they are ready to take their new skills off campus.

"Everyone is realizing that we have this problem," Yates said. "We’re all beginning to work together to try to create a better world."