This story is part of a reporting project to understand public art in Colorado, how it's funded and the impact it has. If you spot public art that strikes you, take a photo and email it to arts@cpr.org.

Back then, she didn’t like math. But nearly 20 years later, math helps guide her creative work. The artist even builds bigger compasses and uses them to create wall murals, including one that recently received national recognition.

The public art piece is called “City of the Sun.”

“I chose that title because the sun is shining here constantly,” Danielle says. “And it brings so much happiness to people to be feeling so much vitamin D all day long.”

You’ll find the mural along the Cherry Creek Trail near Speer Boulevard and Blake Street in downtown Denver. The big, gold circle in the middle resembles the sun. It’s a mandala -- an ancient form of prayer. And it’s surrounded by smaller circles.

“All of these golden stars, or circles, that are radiating are connected by a silver web and this web of space actually represents our interconnectivity as people,” she says.

Danielle also uses what she calls the sacred principles of geometry, which she learned while studying graphic design in college. And the artist says they reflect the world around us.

“This is how our universe is constructed,” Danielle says. “This is the spiral of a galaxy, the spiral of a sunflower. It is the same proportions that your body is based on.”

How Much Denver Spent On ‘City Of The Sun’

Danielle spent more than a month on this piece last year. The city of Denver commissioned the mural as part of its Urban Arts Fund, a graffiti prevention program that started eight years ago.

“The idea is that if you put a mural on a wall that’s vandalized, it’ll prevent the wall from being vandalized in the future,” Denver's public art program manager Michael Chavez explains.

“Some projects focus on community engagement and sometimes they involve at-risk youth or underserved areas. A focus of the last few years has been taking projects into areas of Denver that don’t normally get public art.”

That money is not made up of tax dollars, according to city officials. It's separate from Denver's general public art program, which ties commissions to construction projects. This public art is funded by pulling from 1 percent of capital improvement budgets that exceed $1 million.

On the other hand, the Urban Arts Fund money comes directly from Denver Arts and Venues, the city’s cultural agency. It generates revenue from ticket sales and managing public venues like Boettcher Concert Hall and Red Rocks Amphitheatre.

The Urban Arts Fund now has more than 115 murals across Denver County. This year, more than 60 applications were submitted. A committee of city staff, community members and artists selected 17 projects that totaled $65,000.

The Meaning Behind The Mural

When you get close to Gemma Danielle’s mural, you can see the detail her work is becoming known for.

“This mural looks very fluid and full of motion, but actually it’s made up of thousands of straight lines,” she says.

Each of these straight lines represents a prayer Danielle recited silently while making the mural, she says. Some were inspired by strangers she met.

“These prayers are for our community to receive joy, prayers for the empowerment of everybody, for all of us to treat each other like brothers and sisters,” Danielle says.

The artist even invited people out while she painted during the blood moon in September. She hosted an event and asked her partner, Ahmad Sawalmeh, to play his Tibetan sound bowls.

Danielle says the bowls carry healing properties and that they too tap into the world of geometry.

“When sound vibrates, it becomes geometry,” she says.

Americans for the Arts recently praised Gemma Danielle’s “City of the Sun.”

The non-profit organization, which promotes the arts across the United States, honored 38 outstanding public art projects through its Public Art Network in June.

“City of the Sun” was different and more elaborate than the other murals, Diehnelt says. She points to the piece’s geometry and its meaning.

“[The mural] was really standing out because it went away from being the painting on the wall [that] shows people and also it was not graffiti,” she says. “And we really wanted to look for artwork that is doing something for discussion in the public art world today.”

Danielle painted a similar mural outside Crema Coffee House in north Denver two years ago. She says public art like this gives the city an identity.

“Because it’s not about ‘Gemma’s work,’” she says. “It’s about: That’s my coffee shop, that’s my neighborhood, that’s our community, that’s how we relate to this space.” 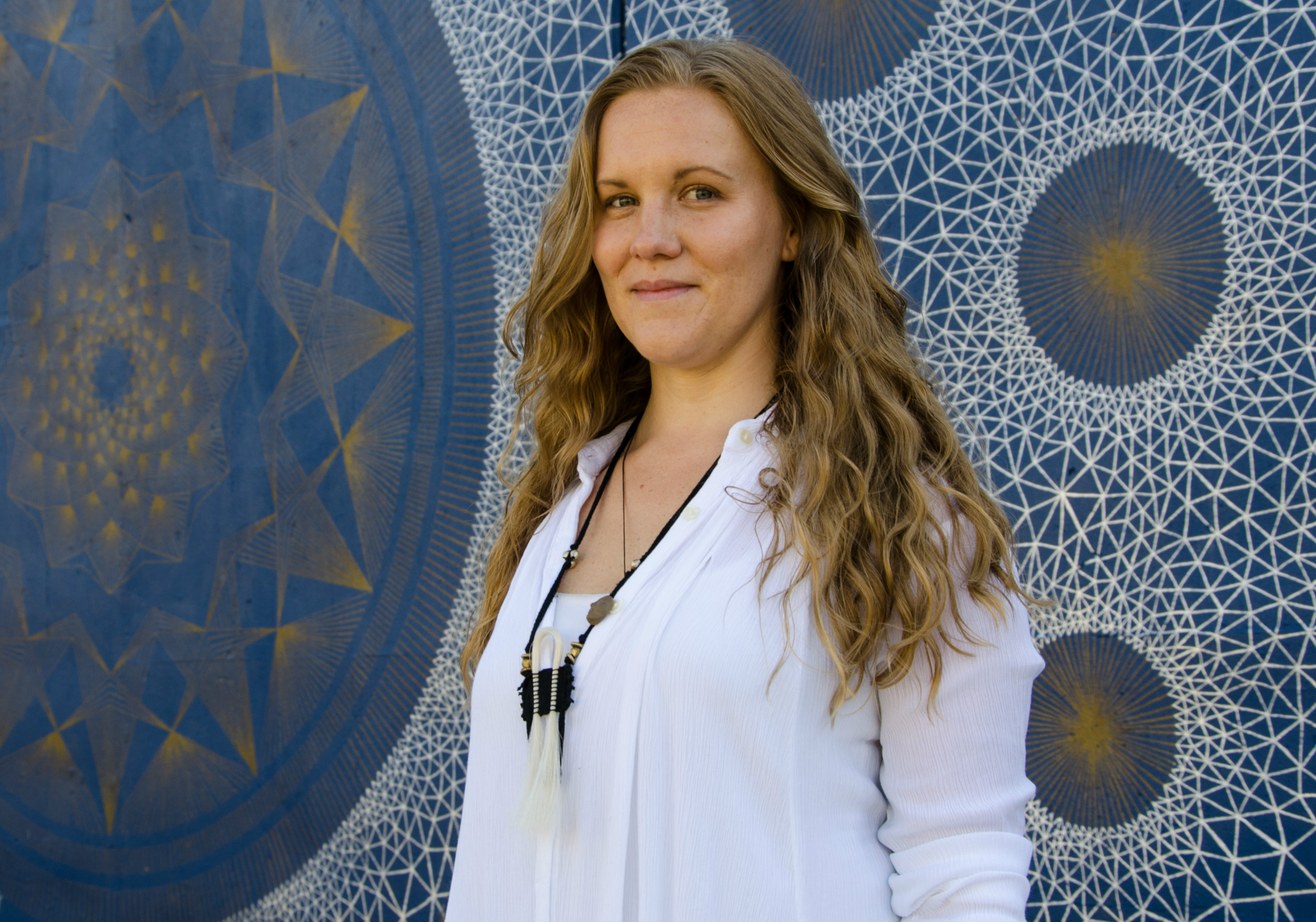 Danielle had some help when she painted “City of the Sun” along the Cherry Creek Trail. The artist was four-months pregnant at the time. She gave birth to her son, Jupiter, in March. He’s helped her to understand the true power of creation, Danielle says.

“He’s made me really come back to the moment and look into his eyes and sit with that beautiful moment. There’s nothing else more important.”

And that’s what Danielle hopes her murals offer people: The chance to stop and enjoy a beautiful moment together.