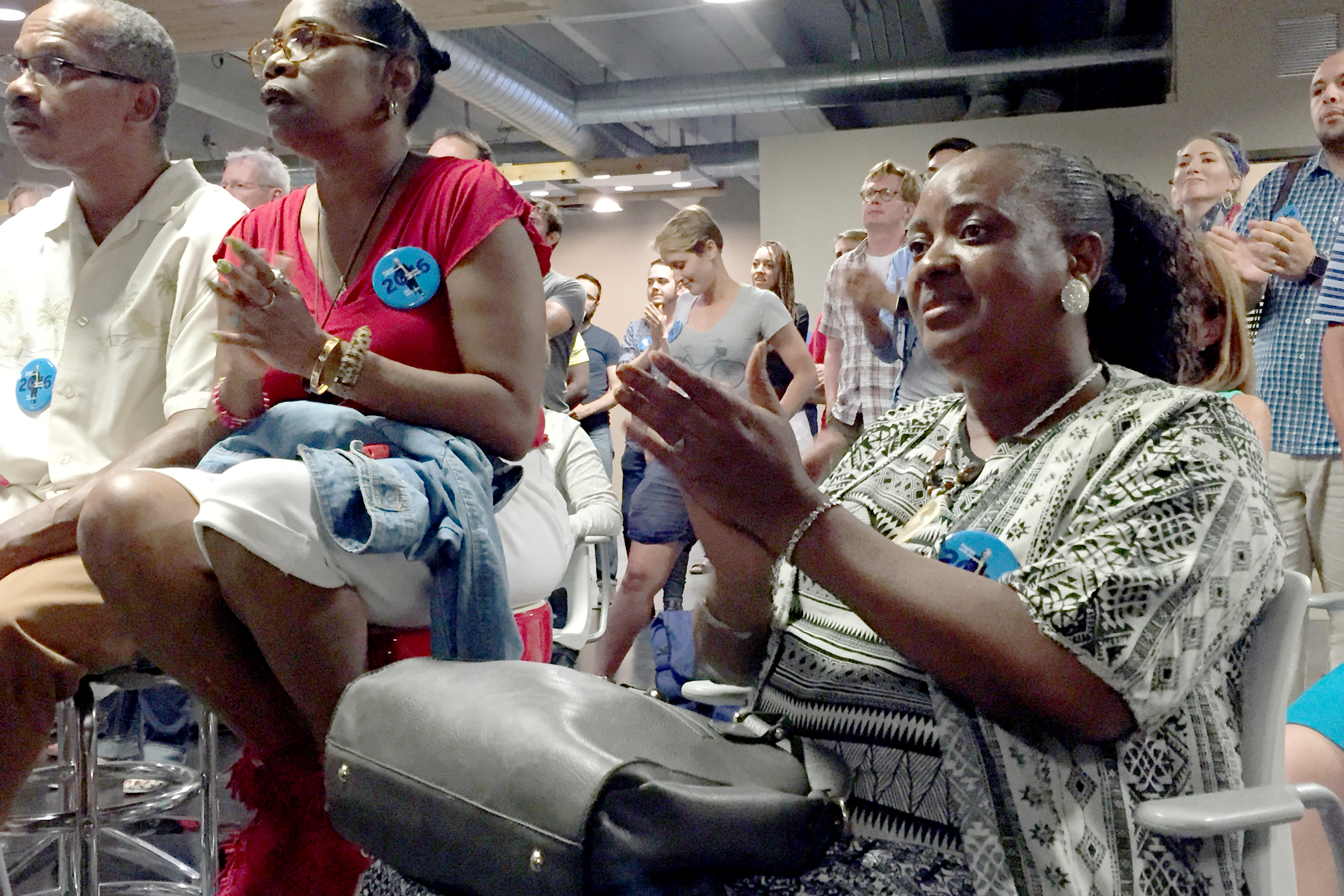 (Vic Vela/CPR News)Eunice Walker proudly wore her “Hillary 2016” campaign button Thursday night as she sat through the parade of speakers leading up to Hillary Clinton’s nomination acceptance speech at the Democratic National Convention.

Walker was in Denver, though. She was one of more than 200 Clinton supporters who packed an event space in the Santa Fe Arts District. Like some others around her, she was often emotional when she spoke of her adoration for the Clinton family.

Walker emigrated from Botswana, Africa in 2001 and runs her own home care business in Denver. She speaks glowingly of the global charity led by former President Bill Clinton.

“The Clinton Foundation helped the entire continent of Africa to fight aids and poverty. And on his right hand side was his wife,” she said. “And you what they say: Behind a successful man there stands a strong woman. And this is the strongest woman I know.”

But Clinton’s speech came as many Americans wonder whether the former secretary of state can be trusted. Some of those same concerns come from those on the political left who are ardent Bernie Sanders supporters.

“I don’t know those people who are saying that she’s not trustworthy,” she said. “You know what, when you are in the ring fighting, everybody comes at you.”

Ed Vigdor of Denver has read the same polling and he thinks people are too hard on the former senator, secretary of state and first lady.

“Do some research and actually look at the facts and stop listening to opinions,” he said. “She’s a politician. They all are flawed in some way and stuff like that. We’re all human beings. None of us are perfect.”

There are also concerns that Clinton may not be able to win over hardcore Bernie Sanders supporters. Some Sanders supporters held protests outside this week’s convention in Philadelphia. And some delegates even tried to disrupt Clinton’s speech.

Vigdor once backed Sanders and knows a lot of “Bernie or Bust” people who have yet come on board with Clinton’s campaign.

But Vigdor hopes Sanders die-hards eventually back Clinton, primarily because the next president will determine the direction of the Supreme Court.

“You know what, as much as I respect their opinion and I get where they’re coming from with the frustration of our current government situation,” he said. “This election is just way too important for a protest.”

Millennials make up a big chunk of Sanders supporters. Colin Cannon, 18, recently graduated from Littleton High School and caucused for the Vermont senator. Now he’s ready to cast his first vote in a general election for Clinton, in part because he was won over by Clinton’s plan to ease college debt.

He has a message for Sanders supporters who may be inclined to vote for a third-party candidate.

“I say you’re wasting your vote. You aren’t helping a candidate get elected that has a chance,” he said. “If you are in favor of the Green Party stance, helping the Democratic Party move left instead of throwing away your vote.”

Myles Iribarne recently moved to Denver from Arizona, where he cast his ballot for Sanders in the primary. He now supports Clinton.

Clinton got loud cheers for promoting a path to citizenship for undocumented immigrants – And when she called to reverse the Supreme Court’s Citizens United decision, which allows corporations and labor unions, among others, to spend unlimited amounts of money in a political campaign.

But perhaps the most passionate eruption from the Denver crowd came when Clinton acknowledged the milestone of becoming the first female presidential nominee from a major political party.

That brought Eunice Walker to tears.

“You know what? It has long been due,” she said. “Even in Africa, we have about three women presidents.”

“I was crying because I never thought I would live to see a woman president of this country. This is the most powerful country in the whole word.”

Lauren Havens wrapped her arms around her daughter, Madison, and wept. Madison has a genetic syndrome that causes mental impairment.

“She’s a woman. She’s me. Hillary Clinton is me,” Lauren Havens said as tears streamed down her face. “And she fights for rights of the disabled. That’s my daughter. It’s a big deal.”